About 90% of stomach tumors are adenocarcinomas, which are subdivided into two main histologic types: (1) well-differentiated or intestinal type (IGC), and (2) undifferentiated or diffuse type (DGC). The intestinal type is related to corpus-dominant gastritis with gastric atrophy and intestinal metaplasia, whereas the diffuse type usually originates in pangastritis without atrophy. Diffuse gastric cancer (DGC) differs from the more common intestinal (IGC) type in that the former is less differentiated, has a poorer prognosis, and occurs more frequently in younger patients.

The incidence of IGC is decreasing, while the incidence of DGC is increasing. Scirrhous gastric cancer, which has an extremely poor prognosis (5-year survival rate, 10–20%), mainly consist of DGC. Patients with germ line mutations of CDH1 (E-cadherin), which is critical for the epithelial-mesenchymal transition (EMT) and invasion, develop DGC.

What is GDF15 and its expression profile in patients with DGC?

Using secretomics and transcriptomics, researchers recently discovered that the progression of DGC is driven by Growth Differentiation Factor 15 (GDF15), which belongs to the transforming growth factor-beta (TGF- β) family. The protein is expressed in a broad range of cell types, acts as a pleiotropic cytokine and is involved in the stress response program of cells after cellular injury. Increased protein levels are associated with disease states such as tissue hypoxia, inflammation, acute injury and oxidative stress. 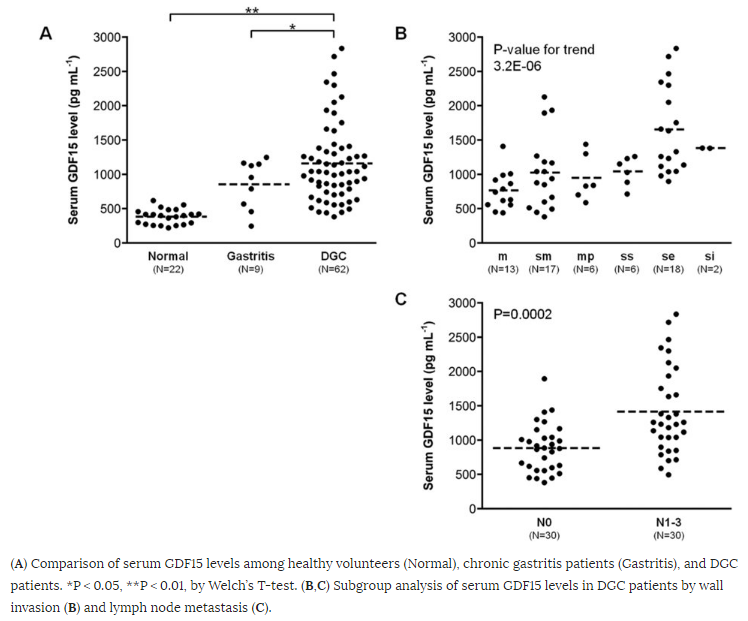 How does GDF15 induce reactive stroma to drive gastric cancer?

TGF-β secreted by cancer cells is important for fibroblast activation [inducing tissue fibroblasts into myofibroblasts or cancer-associated fibroblasts (CAF)], resulting in a reactive stroma [extracellular matrix (ECM)]. A reactive stroma is essential for tumor growth, angiogenesis, invasion, and metastasis, as seen in Figures 2 and 3. 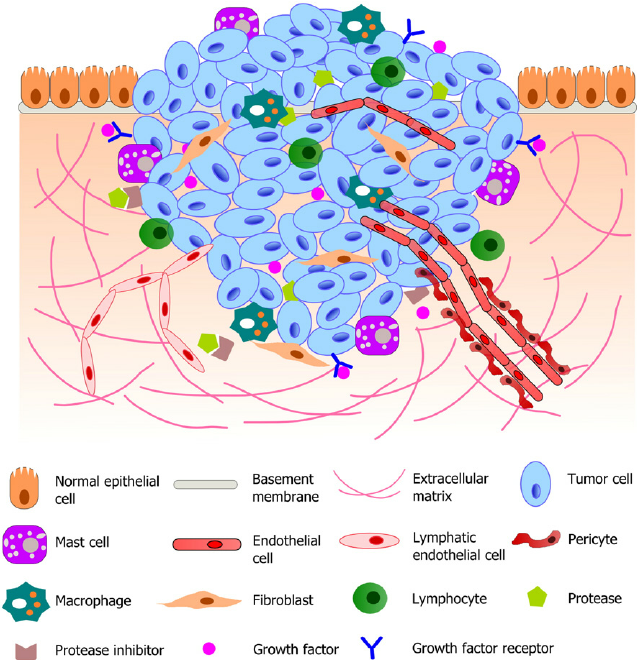 Figure 3. The tumor invasion front. Observations on longitudinal sections (top-left corner) of cancers penetrating the host stroma show an octopus-like configuration of cancer spread. After penetrating the basement membrane, epithelial cancers migrate toward the underlying lymphatic or blood vessels, patterned in a branching morphology. In such areas within the stroma, transverse section (yellow line) may reveal patterns of cancer cell “islets”/“cohorts” (top-right corner). In this cartoon, cancer cell cohorts are depicted with black, blood vessels with red roundish shapes and stromal cells (CAFs) are depicted with the background green color. A magnification of the tumor-host cell interface area reveals 2 clearly distinguished subpopulations, the cancer population, and the myofibroblasts. The magnified area is depicted through both a cartoon (left schematic) and a histologic figure (right schematic), obtained from our archive. This interaction area is described as the “tumor invasion front” and it is characterized by “desmoplasia,” or “desmoplastic reaction,” a histopathological lesion defined as the peritumoral accumulation of CAFs with parallel deposition of ECM components. http://mcr.aacrjournals.org/content/10/11/1403.figures-only?cited-by=yes&legid=molcanres;10/11/1403

To what extent does GDF15 mimic the effects of TGF-β?

GFDF15 was shown to induce similar changes in fibroblasts as TGF-β. Proliferation of NIH3T3 fibroblast was significantly promoted by GDF15 as well as TGF-β. Transcriptome analysis (a total of 15,554 genes) identified 45 differentially expressed genes (33 up- and 12 down-regulated) (Figure 4). GDF15 and TGF-β stimulation displayed similar expression patterns in these 45 differentially expressed genes. 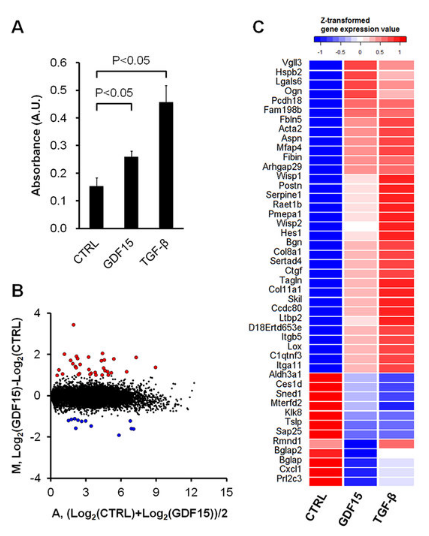 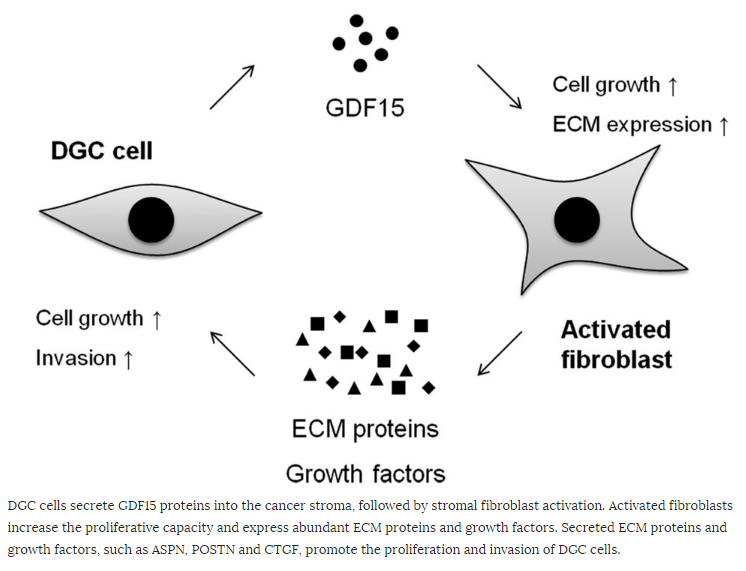 What is the role of GDF15 in other cancers?

Interestingly, GDF15 is also implicated in breast cancer as a means by which breast cancer cells that over-express HER-2 become resistance to anti-HER monoclonal antibody (trastuzumab – Herceptin):