Varubi is a substance P/neurokinin-1 (NK-1) receptor antagonist. Activation of NK-1 receptors plays a central role in nausea and vomiting induced by certain cancer chemotherapies, particularly in the delayed phase. Varubi is provided to patients in tablet form.

The safety and efficacy of Varubi were established in three randomized, double-blind, controlled clinical trials where Varubi in combination with granisetron and dexamethasone was compared with a control therapy (placebo, granisetron and dexamethasone) in 2,800 patients receiving a chemotherapy regimen that included highly emetogenic (such as cisplatin and the combination of anthracycline and cyclophosphamide) and moderately emetogenic chemotherapy drugs. Those patients treated with Varubi had a greater reduction in vomiting and use of rescue medication for nausea and vomiting during the delayed phase compared to those receiving the control therapy.

Granisetron (trade name Kytril) is a serotonin-3 (5-HT3) receptor antagonist administered intravenously. Serotonin receptors of the 5-HT3 type are located peripherally on vagal nerve terminals and centrally in the chemoreceptor trigger zone of the area postrema. During chemotherapy-induced vomiting, mucosal enterochromaffin cells release serotonin, which stimulates 5-HT3 receptors. This evokes vagal afferent discharge and may induce vomiting. Animal studies demonstrate that, in binding to 5-HT3 receptors, granisetron blocks serotonin stimulation and subsequent vomiting after emetogenic stimuli such as cisplatin. In the ferret animal model, a single granisetron injection prevented vomiting due to high-dose cisplatin or arrested vomiting within 5 to 30 seconds.

Dexamethasone is a corticosteroid. The mechanism of action of corticosteroids in CINV remains relatively unknown. Studies in pigeons suggest that the antiemetic effect of steroids may be partially from their activity in the central nervous system. Evidence also suggests that the effect may be from activation of glucocorticoid receptors in the nucleus of the solitary tract in the medulla. Lastly, dexamethasone and methylprednisolone have also been shown to antagonize 5HT3A receptors in Xenopus oocytes; this antagonism may also explain the beneficial effects of corticosteroids in CINV prophylaxis and treatment.

Delayed emesis has been largely associated with the activation of tachykinin family neurokinin 1 (NK1) receptors (broadly distributed in the central and peripheral nervous systems) by  substance P. Varubi (rolapitant) and netupitant (part of Akynzeo, a fixed combination of netupitant and palonosetron, a 5-HT3 receptor agonist), inhibit substance P-mediated responses.

NK1 receptor antagonists prevent both acute and delayed chemotherapy-induced nausea and vomiting (CINV). These agents act centrally at NK-1 receptors in vomiting centers within the central nervous system to block their activation by substance P released as an unwanted consequence of chemotherapy.

Both peripheral (glosophararyngeal and vagal nerves) and central (cortical and cerebellar) pathways can activate neuronal nuclei in the brainstem and trigger a sequence of events that results in the vomiting reflex. The 5-HT3 receptor antagonists are thought to exert their actions predominantly on the peripheral terminals of vagal afferents in the gastrointestinal tract and in the chemoreceptor trigger zone (CRTZ) that lays in the area postrema outside of the blood-brain barrier to block the activating effects of serotonin released during chemotherapy. The CRTZ signals to another area, the nucleus tractus solitarius (NTS), in the brain stem that also receives emetogenic stimuli from higher brain centers (e.g., cortical and vestibular) as well as gastrointestinal vagal afferents, and is thought to define the patterns of central activity underlying CINV.

Preclinical studies suggest that it is here within the NTS that NK1 receptors antagonists exert their strongest antiemetic properties through central inhibition of the emesis pattern generator. This central site of action is the likely explanation for the unique broad antiemetic pharmacological profile of these agents, indicating that substance P acting at central NK-1 receptors is one of the final common mechanisms involved in activation and coordination of the vomiting reflex. 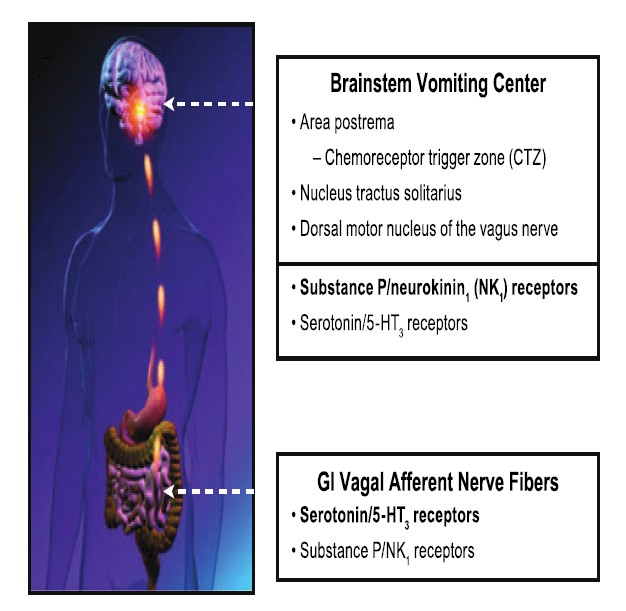