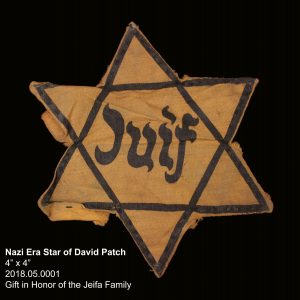 During World War II, German forces occupied parts of France from 1940 until 1944. Starting in June 1942, it was required that people of Jewish descent wear the six-pointed Star of David – a common symbol of Judaism—to signify their heritage. “Juif,” the French word for “Jew,” is written in Hebraic-style lettering. This star belonged to Michel Jeifa of Paris who was sent to southern France and hidden by a Christian family in 1942 at age 16. He and his sister survived the Holocaust, while their parents lost their lives at Auschwitz concentration camp.