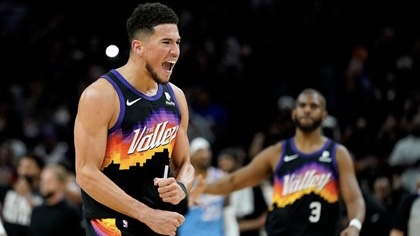 The second half of the NBA season has officially started, after what many would say was a disappointing All-Star Break. While the celebration of the NBA 75, the top 75 NBA players for the 75th anniversary of the NBA, was a nice addition to the usual festivities, many fans were disappointed with the events, especially the slam dunk contest. This event has been on the decline for years now and many believe that this year is the worst that it has ever been. While the regular season approaches its end in a little over a month, there are many stories and headlines to watch out for over the next 15-20 games.

One of the biggest stories is how the Brooklyn Nets will fair after they traded superstar James Harden for Ben Simmons, who has not played in a single game this season. Prior to the All-Star break, they had gone on an 11 game losing skid, and currently sit at just above .500 and in the play-in tournament. This is very surprising for a team full of superstars that was projected to be title contenders before the season started. Of course, the COVID-19 vaccine situation with Kyrie Irving has not made things any easier, although the unvaccinated point guard is now allowed to play in away games, and fans hope that it is a matter of time before the mandate is lifted, allowing him to play in Barclays Center.

On the other side of New York, the Knicks have had a disappointing season compared to their playoff berth last year. They are well under .500 and have a slim chance to make the play-in tournament, but it would take a big winning streak to do so. They won 16 out of their last 20 games last season in order to get the 4th seed in the Eastern Conference, so anything is possible. On the other side of the Simmons trade, there is the Philadelphia 76ers with a new dynamic duo of James Harden and Joel Embiid, which seems to be a working combination as of late. They are currently a top 3 seed in the East and have a good chance to make a run at the title. It will come down to if Harden can perform at a superstar level in the playoffs and if Embiid can continue his MVP-level play and stay healthy.

Going over to the Western Conference, the Phoenix Suns have been playing at a phenomenal level, holding the best record in the Western Conference and the entire league. Shooting guard Devin Booker has proven himself as a young star in this league, even getting comparisons to the legend Kobe Bryant, someone who Booker has always looked up to. With the veteran leadership of Chris Paul and tenacious play of young center Deandre Ayton, the Suns could be on the verge of back-to-back Finals appearances after their loss in last year’s NBA Finals to the Milwaukee Bucks. Right behind Phoenix in the West is the young Memphis Grizzlies, led by 22-year-old Ja Morant. The Grizzlies are one of a few teams that have shocked many with their astounding play, along with the Chicago Bulls and Cleveland Cavaliers in the East. DeMar DeRozan, who the Bulls acquired before the start of the season, has been playing at a superstar level and surprisingly has led the Bulls to a top 4 seed in the East. Him and Morant have been in the Most Valuable Player conversation for leading their teams to such high levels, while Darius Garland and Jarrett Allen made their first All-Star appearances for their great play in Cleveland.

In the East, the Miami Heat are the top seed led by Jimmy Butler and the reigning champion Milwaukee Bucks are continuing their great play led by Giannis Antetokounmpo. The 76ers, Bulls, Cavaliers, as well as the Celtics, who are starting to heat up in the rankings. It is crazy to see a team like Brooklyn be in the play-in tournament; that is how deep the East has been this year. Over on the West side, the top 2 seeds are the Suns and Grizzlies followed by the Golden State Warriors playing great and hoping to add another ring to their collection, the Utah Jazz led by Donovan Mitchell and Rudy Gobert, the Dallas Mavericks led by Luka Doncic, the Denver Nuggets led by reigning MVP Nikola Jokic, and another sleeper team in the Minnesota Timberwolves, led by superstar Karl-Anthony Towns. Both star studded Los Angeles teams find themselves in play-in spots. The Lakers have been led by superstar LeBron James but injuries to Anthony Davis and the disappointing play of Russell Westbrook have led them to not meeting preseason expectations. The Clippers have played the entirety of their season without their own superstar Kawhi Leonard and their next best player Paul George has missed most of the season. Between upcoming young teams and established veteran teams all playing well,  this all should add up to an exciting second half of the NBA season.