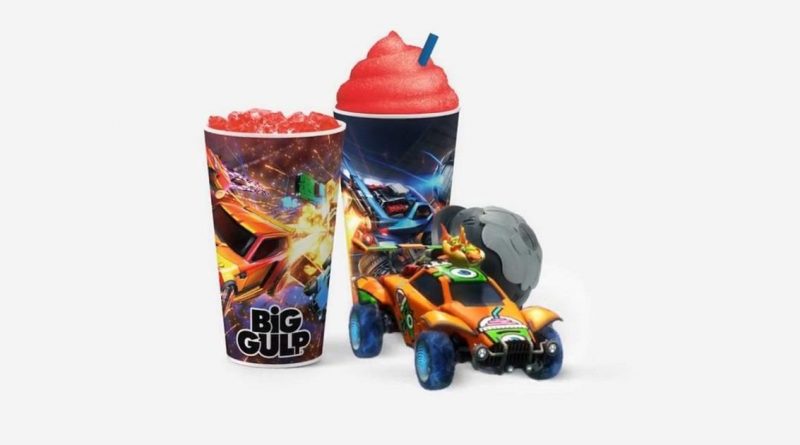 7-Eleven teams up with Rocket League.

The convenience store, 7-Eleven, has teamed up with Rocket League to create customizable 7-Eleven themes for players to use, given a few conditions. Rocket League is one of the hottest games in the E-Sports world, and 7-Eleven wanted to take advantage of the popularity to bring in younger customers. With around 95 million monthly players, it has maintained its status as one of the most popular games on the market for the past few years, and 7-Eleven hopes to attract this audience and gain even more traction. As a result, there are customizable in-game items and rocket league merchandise that you can get at 7-Eleven.

Players must purchase particular food and beverage products at participating stores, 7-Eleven, Speedway, and Stripes, to get the in-game items. Players are to scan a code at checkout through the 7-Eleven application and receive an email with a code. Once players receive this code, they can redeem it in Rocket League and enjoy playing with their new item. Things you can buy for the Rocket League items include Mountain Dew, Doritos, Cheetos, Big Gulps, Slurpees, and Big Bite hot dogs. This makes it a great deal, Considering that Doritos and Mountain Dew are the perfect snacking combination for ‘gamers.’

With these purchases, customers will also receive a limited edition, color-changing collectible cup with a Rocket League design and a lid in the style of the soccer ball from the video game. Once these products are purchased, players will be able to go on Rocket League and obtain different customizable items such as the Slurpee boost for the back of the car, a “Big Bite” antenna to go on top of the vehicle, and a Slurpee decal for the car’s exterior design. Although these items do not affect the gameplay, Rocket League players like to collect items and customize their vehicles in hopes of having the most excellent-looking ones.

It is not the first time that the two companies have collaborated, as last year there was a campaign known as #CarsOF7ELEVEN, in which many people had their cars in front of 7-Eleven stores. In this year’s collaboration, players will also have the opportunity to win a Ford Mustang, called the Model711, and be able to customize it to their liking. The giveaway will take place on social media and in stores, which helps the campaign to extend its approach from gaming to the automobile community. To go along with all of this, 7-Eleven will also be an official sponsor of the North American Rocket League Championship Series (RLCS), the world’s premier professional Rocket League competition. This includes naming rights to an event, the 7-Eleven Slurpee Cup, taking place from May 13th-15th of this year, on Rocket League’s official Twitch and YouTube channels.

“7-Eleven’s social followers LOVE sharing their ‘carfies’ with us (AKA photos of their sweet rides in front of 7-Eleven stores) using the trending hashtag #CarsOf7Eleven, and Slurpee-loving car enthusiasts have even organized unofficial car meetups in our parking lots across the country,” said Marissa Jarratt, 7-Eleven Chief Marketing Officer. “So, it felt right to give car fans the chance to boost their ride in the Rocket League arena… While also helping us design… and potentially win… a Rocket League-inspired car IRL.”