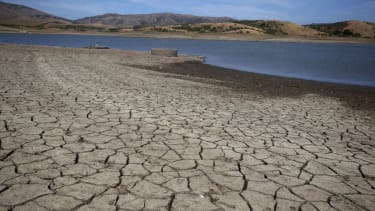 The western United States has been locked in a mega-drought for the past 22 years and has developed into the worst one in at least 1,200 years, according to a study published February 14.

The study, published in the journal Nature Climate Change, shows that between the years 2000 and 2021, the western areas of North America have been experiencing the driest conditions since the year 800 C.E. due to a major lack of soil moisture. The research has found that human-caused climate change is the major cause of these conditions, which have been described as a “slow-motion train wreck” by Jason Smerdon, a climate scientist at Columbia University as well as one of the study’s authors. “What we showed in the paper is that increasing temperatures in the Southwest contributed about 42 percent to the severity of this drought,” he said.

The drought has already drained the water supplies of Lake Mead and Lake Powell, the two largest reservoirs in North America, forcing citizens and officials alike to rethink water management. Just last year, federal water managers declared the first-ever water shortage for the Colorado River, which led to cuts for hundreds of people who use the river. In December, Nevada, Arizona, and California all agreed to take less water from the river. “The Colorado River Basin no longer has the privilege of time,” said Kim Mitchell, senior water policy adviser at Western Resource Advocates, an environmental nonprofit. “It’s imperative for water managers in the West to incorporate a smaller river into future operations and pull out all the stops in scaling up basin-wide conservation.”

The study itself was carried out by observing and analyzing tree rings to figure out the amount of water that was available throughout history. The researchers analyzed trees both alive and dead, as well as wood beams preserved at Native American heritage sites, in an area stretching from southern Montana to areas of northern Mexico. The thickness or thinness of the tree rings are what gave the researchers their answers; the thicker the rings, the more water that was present in that year/period and vise versa. They found that in the time from 800 C.E. to the present there have been at least four different mega-droughts in the same region, with the worst being one that lasted 23 years in the late 1500s.

This situation is not showing too many signs of getting better. There were recent hopes of a rebound in conditions with an improvement in 2019 and record-breaking snowfall in December in California’s Sierra Nevada, but a dry start to this year has put those hopes on hold. Park Williams, a climate scientist at the University of California, Los Angeles, and the study’s lead author, described the west’s water patterns as a yo-yo—the levels are sometimes high and sometimes low. “Climate change has put that yo-yo on an escalator heading down,” he said, “and we cannot let ourselves get tricked by a few wet years into giving up on the progress we’ve been making.”