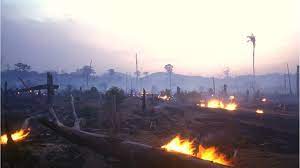 Yes, this has apparently been a problem. People have been putting land in the Amazon Rainforest up for sale on Facebook Marketplace. Even more surprising? The land was actually bought by others.

When these transactions were first discovered, Facebook stated that they did not want to independently put an end to these sales, as their Marketplace Commerce rules and regulations state that commerce policies require buyers and sellers to comply with laws and regulations, and selling land was not directly violating the rules. Facebook claimed that due to the nature of the sales, the outlawing of the land sales would be better taken on by the local judiciary and environmental government agencies. After an investigation by a branch of the Brazilian Ecological Department, the Brazilian Cattle Industry, or BBC, Facebook amended their rules and regulations to now include that. The revision now states: Listings may not promote the buying or selling of animals or animal products, or land in ecological conservation areas.

Many sellers of the land openly admitted that they did not possess a land title, which is the document needed to prove ownership of the land. One seller asserted that “there is no risk of inspection by state agents here” as a tagline in his Marketplace post. A reason for a statement such as this is due to sellers rallying for a change of status of the land plots. Several have gone so far as to deforest the land they wish to own – illegally might I add – and push the local politicians to abolish its ecological protected status, under the basis that as it no longer is in its original condition. Once the protected status is revoked, the buyers are able to purchase the land, therefore legally owning the land.

While the Brazilian government has always had a zero-tolerance policy for all environmental crimes, due to the COVID-19 pandemic, the Deforestation regulation committee budget was cut by 40%, making it much tougher to control the state of the forest. A deforestation combater, Ivaneide Bandeira, stated in an interview with BBC News that “this is a very hard battle. It is really painful to see the forest being destroyed and shrinking more and more. Never, in any other moment in history, has it been so hard to keep the forest standing.”

The Amazon is a protected rainforest, not only for animals who call it home, but for indigenous people as well. This illegal land possession drives the natives of the space to find new water sources and hunting areas and forcing them to relocate their families after decades of living in the area.