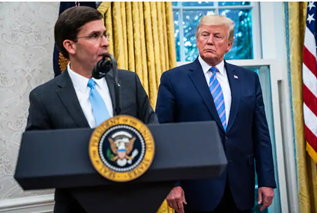 President Trump has fired Defense Secretary Mark Esper. Esper was appointed by President Trump in July of 2019. Esper was the former secretary of the Army and a former Raytheon executive. He took over amid the resignation of former defense secretary Patrick Shanahan. Shanahan resigned abruptly in the middle of preparations for his confirmation hearing. Shanahan only served for six months after his predecessor Jim Mattis resigned over disputes with the president about military-related matters. The firing of Esper has been speculated to arise from disagreements with the President. Notably, Esper disagreed with the president’s decision to dispatch thousands of troops on the streets of Washington amid protests over the police murder of George Floyd. He and others were concerned that sending troops in the streets would look like martial law. Also, Esper issued a ban on the display of the Confederate battle flag on military bases and stated his openness to military bases being renamed. Trump angrily tweeted that he would not allow military bases to be renamed but did not overturn the ban. Aides attempted to talk Trump out of firing Esper, but Trump believed that Esper was attempting to embarrass him and damage his chances of reelection. There is some irony at play here, as the president once called him ‘Mark Jesper’, implying he goes along with everything he says, and it has been said that he was fired because he disagreed with the president.

President Trump announced his decision on Twitter, writing that Esper had been “terminated.” The president also tweeted that he would be replacing Esper with Christopher C. Miller. Trump described Miller as “highly respected”. He was unanimously confirmed by the Senate when appointed as the Director of the National Counterterrorism Center. The termination of Esper and replacement with Miller marks the fourth official to lead the Pentagon under President Trump. Trump’s decision to fire Esper has been faced with backlash. Representative Adam Smith said, “President Trump’s decision to fire Secretary Esper out of spite is not just childish, it’s also reckless.” Eric Edelman, a former top Pentagon official under President George W. Bush, said, “It’s mean-spirited vengeance and vindictiveness, and he’s doing it because he can.” This all comes just days after Joe Biden was declared the President-Elect in what is sure to be a historic election. The president has yet to concede to Biden but is instead pursuing legal action in an attempt to overturn key states the president won in 2016 against Hillary Clinton. This decision by the president has been called a volatile move in an uncertain time. There is no precedent for a president to start “cleaning house” after he has just lost an election.  Even though Joe Biden has been unofficially declared as president-elect, President Trump is still the president, so making reckless moves just months before leaving office may be detrimental to the transition process.

Michele Flournoy, a previous top Pentagon official who is viewed as the main contender for protection secretary under Biden, has said that a “steep” withdrawal would subvert harmony and that a counterterrorism power ought to stay in Afghanistan in any event until an extensive arrangement between the Taliban and the Afghan government is set up. The U.S.- Taliban bargain guarantees full U.S. withdrawal before the finish of April if its conditions, incorporating Taliban dealings with the Afghan government and a decrease in savagery, have been met. It contains no arrangement for a lingering U.S. counterterrorism power.

Found out if Biden plans to proceed with the arrangement, the withdrawal and the current U.S. agent to the harmony talks, Zalmay Khalilzad, a Biden representative said Friday that “President-elect Biden laid out an extensive foreign agenda over the course of the campaign and looks forward to delivering on it once in office.” The representative, who was not approved to talk on the record, said that no more subtleties would be offered as of now. Biden, he stated, “firmly believes in the principle that there must be only one president at a time guiding our country’s foreign policy and national security as he is focused on preparing to govern.”