The No. 6 Seton Hall men’s soccer team (10-1-3) will face off against the Virginia Tech Hokies (7-6-3) in the Sweet 16 of the NCAA Men’s Soccer Tournament on May 6 at 9:00 p.m. Seton Hall is coming off their 2-1 first round victory over the Air Force Academy while the Hokies took down the Oregon State Beavers in overtime also by a score of 2-1.

In the last game, the Pirates two goals were scored by JP Marin and CJ Tibbling, who got the go-ahead goal in the final minutes of the match. This goal was Tibbling’s third game winning goal for the season for the Pirates and has now scored the game winning goal in back-to-back games.  One of the keys to last game for the Pirates was the number of shots they earned. The Pirates outshot Air Force 23 to nine. While the difference in the number of shots makes it look like the Hall had a clear advantage, the game was tied 1-1 for most of the match 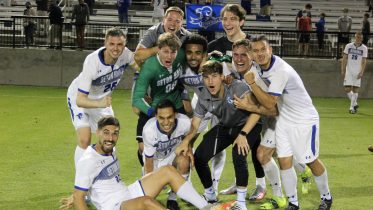 Looking at Virginia Tech’s first round match, they had a pretty similar match to the Pirates. The Hokies were up 1-0 for the majority of the match until they allowed Oregon State to break through in the 87th minute. Their game-winning goal came in the final minutes of the first period of overtime where Jacob Labovitz scored his second header of the match to secure the win over the Beavers.

While Seton Hall has the better record between the two teams, Virginia Tech is no pushover. Earlier in the season they were able to stay in competition with No. 5 Virginia and tie 1-1. They also defeated Virginia when they weren’t ranked later in the season by a score of 1-0. Another big win they had was a 2-0 victory over the Coastal Carolina Chanticleers and they got a top-25 1-0 victory over the No. 15 North Carolina Tar Heels.

This Virginia Tech team’s strong suit is its defense. The most goals they’ve allowed in a game this season is four, but they were able to hold Oregon State to one goal in 110th minute with the Beavers being the nation’s leading offense. Tibbling and the Pirate offense will have to be on their game in order to get past the stout Hokie defense, which includes redshirt-freshmen goalkeeper Matt Zambetti who recorded six saves in their win over the Beavers.

Thursday night has all the makings of a classic as a trip to the Elite Eight is on the line for both these teams. This is the first time the Hokies and Pirates are matching up since 2002 where the Pirates earned a 2-1 victory over the Hokies. Seton Hall is 2-0 over Virginia Tech all-time with both matches coming in the early 2000s.

Make sure to be on the lookout for all of The Clarity Stripe’s coverage of today’s match!