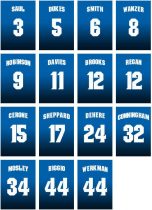 The ultimate honor a university can offer a student-athlete is to retire their number. Usually reserved for those who displayed athletic excellence and truly incredible ability, numbers can also be retired for tragedy or off-the-field impact.

With 15 currently retired numbers, Seton Hall University has seen decades of genuinely brilliant athletics. Ranging from Bob Davies, who pioneered the behind-the-back dribble in the early 1940s, to Kelly Smith, who scored 76 goals in 51 games during her three years as a Pirate before going on to be England’s all-time leading scorer for the women’s team, Seton Hall has seen greatness on its campus.

Seton Hall’s ultimate honor is rare enough that the decision-makers at the university do not have a set policy for number retirement, according to Bryan Felt, Director of Athletics and Recreational Services at Seton Hall.

“Decisions on number retirement are made by Athletics Department Senior Staff and reviewed internally with the appropriate coaching staff,” said Felt. “Credentials among those that have been retired include national player of the year and All American status.”

However, there has been a distinct lack of numbers retired in the last 20 years. Kelly Smith, the last athlete to get her number retired played in the 98-99 season for women’s soccer.

The last number to be retired was in 2004 when legendary Baseball coach Mike Sheppard Sr. was honored after more than 40 years at the university and 31 years as the coach.

Excellence is the standard retired numbers are held to. A standard so high, that after leaving Seton Hall our athletes are prepared to go on to do great things.

Take Kelly Smith for example. After her time here at Seton Hall, where she earned All-American honors, was a three-time Big East Player of the Year, and set two NCAA records for points per game (3.41) and goals per game (1.49), Smith went on to play 20 years as professional, only retiring in January of 2017, according to her club, Arsenal.

In her professional career, Smith continued her habit of scoring goals. Whether it be for Arsenal or an American team or England, scoring 163 times in a total of 290 appearances. Smith was arguably at her peak from 2005-2009 where she scored an incredible 73 times in 66 appearances for Arsenal.

Her professional success mimics the excellence that other Seton Hall greats have gone on to produce. A possibly more recognizable name for people on this side of the Atlantic is Craig Biggio.

Biggio was incredible in the Pirate’s uniform. Receiving two First Team All-Big East selections, being elected NJCBA Player of the Year, and First Team All-America by Baseball America in 1987 only set the stage for his success in the major leagues.

With a 20 year career under his belt, all for the Houston Astros, Biggio was a seven-time National League All-Star and reached the vaunted 3,000 hit club to join the likes of Derek Jeter and Ichiro Suzuki.

Both Dukes and Dehere had their numbers retired after their time as Pirates. Powell’s last season – cut short by the pandemic – left him third in school history for points (2,252), first in 3-pointers made (348), and nine games away from tying Seton Hall’s all-time record for wins.

While there is no information on those being considered at this for number retiring, according to Felt; many Seton Hall students are waiting for the time that Powell’s famed number 13 is retired from the basketball program.