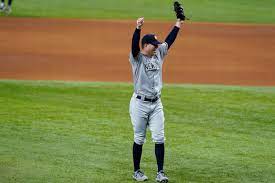 New York Yankees right-hander Corey Kluber threw the sixth no-hitter this season in Major League Baseball, striking out nine in a 2-0 win against the Rangers on Wednesday night in Arlington, Texas.

The 35-year-old’s gem came one night after Detroit Tigers right-hander Spencer Turnbull accomplished the feat against the Seattle Mariners.

“It was a lot of fun, I think it was a special night,” Kluber said. “I’ve never been part of one, witnessed one, yet alone thrown one.”

Kluber came within a four-pitch walk to Charlie Culberson in the third inning of throwing a perfect game.

It was the Yankees’ first no-hitter since July 18, 1999, when David Cone threw a perfect game against the Montreal Expos.

The first no-hitter this season was April 9 when San Diego native Joe Musgrove threw the first one in Padres history against the Rangers in Texas.

“I had butterflies in that ninth inning. I’m getting a little emotional now, even just getting to witness that was was really, really special,” Yankees manager Aaron Boone said. “And to see his teammates and the excitement of everyone for Corey and just the excitement for themselves being a part of such a thing. What a performance.”

Kluber was pitching on that same mound when he was hurt after one inning last season, tearing a muscle in his right shoulder on July 26 in his Texas debut.

First time in MLB history there has been six no-hitters before June.

• First time ever three teams have been no-hit twice in a season (Indians, Mariners, Rangers).

• First time since June 29, 1990, that no-hitters were thrown one or fewer days apart (Dave Stewart and Fernando Valenzuela threw them on the same day).