This week I had the pleasure of sitting down with not only a member but the President of the Seton Hall Rugby Club to learn more about him as well as rugby as a sport. Unfortunately, COVID has not allowed them to play at this time, but he still is staying involved with the team as it has shaped his college career. He certainly had a lot to say and gave me a bit more insight into a club on campus that I was unfamiliar with.

Jennifer Steele: Can you tell me a little bit about yourself and how you are affiliated with SHU athletics?

Trever Peacock: My name is Trever Peacock and I’m a fourth year student in the School of Diplomacy’s five-year B.S+M.A dual degree program and I am currently beginning to take my grad school classes. I currently am the President of the Seton Hall University Rugby Football Club (SHURFC) and this is my third year being a member of the team and club.

JS: What is the process for joining the team? Is there a traditional tryout like most sports?

TP: There is not a tryout process that one must go through to be apart of the rugby team and anyone is welcomed to join regardless of skill or experience. Since we are a club sport we cannot turn away or exclude anyone who has paid the dues which covers costs such as uniforms, safety gear, transportation, and insurance through USA Rugby. The usual process for how someone joins the team is that they hear about us from a friend or an event fair and then they come watch practice and might even participate in non-contact/tackling drills. If they feel like this team is something they want to be apart of, or if they’ve already played rugby before and already are intending to play, they then pay the dues and are a member of the team.

JS: Can you give me a little more information about the sport with rules and regulations?

TP: The basics of rugby is that depending on what season it is, the game is played with either 15 or seven players on a field, roughly the size of a soccer field with field goals that are similar or equal to football goal posts. A try, which is worth 5 points, occurs when a player physically touches the ball to ground in the try zone (end zone), this action is where the term ‘touchdown’ comes from. An extra point conversion is worth 2 points and field goals are worth 3. The most important rule to know when watching or playing rugby is that you cannot advance the ball forward by passing it and must always pass behind you to another player. Second is that when a player is tackled, it is possible for the other team to ‘poach’ the ball from the downed runner because they must release the ball. For this reason, it is important that a teammate be close by and in the area to provide support for the runner and the ball, forming a ruck over the downed runner and the ball to prevent losing possession. 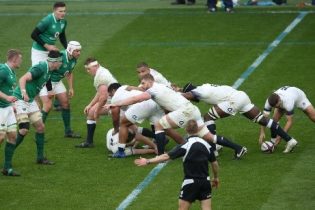 An example of a ruck

If a penalty occurs there is the option for a scrum or free kick from the spot of the foul. A scrum (image 2) is when eight members from each team lineup in a formation resembling a triangle, squat down, and then engage which each other trying to push the other side past the ball that is being rolled under by the team who the penalty was committed against. 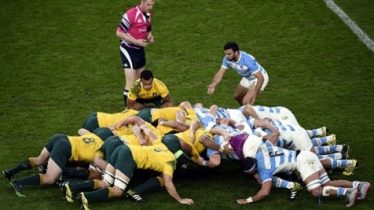 An example of a scrum

When the ball goes out of bounds the line-out occurs, which is one of the most common images that are thought of when thinking about rugby. Anywhere from five to eight players from each side line up across from each other and run a play to try to win the ball that is being thrown in. While it is most common that a player is lifted, it is not required when a line-out occurs. 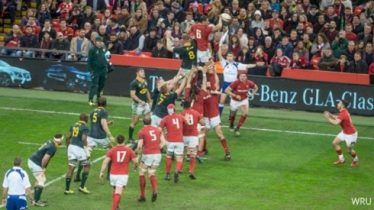 An example of a line-out

JS: A lot of people may be nervous or apprehensive about rugby because of how aggressive it can get? Do you have any suggestions for people to break that stereotype?

TP: While rugby is viewed as a sport where you are more likely to be injured and more vulnerable because there are no pads that you wear, I would argue that it is generally safer to play than football in many aspects. In my experience, when playing rugby, you are more likely to get superficial injuries (cuts, bruises, black eyes) as compared to football but you’re likely to get a more serious injury while playing football (tears, breaks, concussions). There are two reasons why it is in some ways safer with the first being the lack of padding. In football, the pads protect you from being hit but they also can protect while you are hitting someone which allows you to be more aggressive and put more force into a tackle or hit causing more injuries.

The way that one tackles in rugby is also different because the style of play is different which reduces the number of injuries. In football there is a set line to gain with x number of plays to reach the line. Because of this when someone tackles in football, they are looking to stop them where they are hit without giving up more yards. In rugby, when someone is attempting to tackle there is no line to gain and the only goal is to reach the try zone (end-zone). Because of this, the tackler is not immediately thinking about stopping the ball carrier where they are, but rather to down them and focus on turning the ball over in other ways. This aspect of rugby allows for much more passive tackles and less forceful tackles. In summation to a very long answer, I would suggest that when watching rugby to not focus on the lack of pads but rather the style of tackling and how it’s different. Also, to see how many players get injured throughout the game and are down as compared to football games.

JS: How has being a part of the rugby team changed your experience at Seton Hall?

TP: The rugby club has shaped my experience at Seton Hall just about as much as anything else has during my time here. While I am apart of other organizations like Mock Trial, rugby has dominated most of my time away from academics and school. I have been able to find a group of people where there is true comradery and respect on and off the field because of how rugby is played and how that transfers into what type of people it produces. Rugby has also allowed me, and I would hope others, to be who I am without reserve or the concern of being judged.

JS: Since rugby is considered a club sport, how does scheduling and establishing playing locations take place?

TP: We play in a conference called the Tri-State Rugby Conference along with other schools such as William Paterson, Marist, US Merchant Marine Academy, and Vassar. We play each team once and usually have six conference games every year, alternating home and away games every year with each school. Most schools have designated rugby fields on their campus, but we practice and play at Ivy Hill Park behind the softball field. We must line the field and construct the goalposts for every home game that we have.

JS: Do you feel that there should be a way to incorporate Rugby into the Division  I programming at Seton Hall?

TP: While it would be great to see the team receive that same level of notoriety as the other D-I programs, there are some reasons as to why the club can not be on the same level as those programs. Men’s rugby is not recognized as a sport under NCAA, and they have no authority or control over rugby teams and clubs (although there are about 24 NCAA women’s rugby schools with teams). Because of this, USA Rugby, which oversees all rugby in the US from the Olympic and national teams all the way down to U9 leagues. Because rugby is not an NCAA sport it would be difficult to elevate the team the same level as the other sports.

JS: What has been the highlight of your playing career?

TP: It is between two moments for me, one being a personal award and the other being a team accomplishment. After every season, the coaches of our conference convene and vote on the best players at each position across the conference. The last season that we were able to play, in my second year playing, I was awarded Second Team All-Conference for my position at hooker, I swear its an actual position. The other best highlight was our last match this last season when we played the undefeated and first place U.S. Merchant Marines Academy at a time when we had not won any points in our division for the last two seasons. It was a cold day with heavy rain, and we were able to tie them which in my mind was a victory all in and of itself and get points that went towards the standings for our conference.