This weekend I had a sit-down with Terrance Stokes, II, a former manager for Seton Hall’s men’s basketball team. Stokes, II was one of several managers who worked with the team during their successful seasons from 2017-2020. The two of us talked about his time working with the team, his favorite memories, and what he got out of being a manager.

Tyler Soso: What made you decide to become a manager? Did you ever manage a team in high school?

Stokes II: This was my first time doing something like a manager. I actually knew someone that played at Seton Hall during the 80s and he talked to some people and from there I got in. Doing something like this was something that I wanted to do, simply because I grew up playing sports. Now that I was going to college and wasn’t going to be playing football anymore, I wanted to still be in the sports realm.

Soso: What was one of the most difficult tasks you had to handle during the season?

Stokes II: Balancing the time really. Once we got to conference play practices got longer, so my time in the gym was longer. We had to balance out trips, so I had to do that on top of being a full-time student that had to keep a scholarship and I also had a job, so balancing time was probably the toughest part about being a manager.

Soso: What was a typical week’s schedule like for you between games, practices, workouts, etc.?

Stokes II: Once the actual season starts it was really just practice. In practice I would be in the gym from about 2-8 (PM). Practices would be from around 2:30-3:00 to around like 5:00 (pm), but I had to do things prior to practice and post-practice. I would really spend on average about 6-8 hours per day in the gym.

Soso: When the season wasn’t in session did you have any specific duties to do during the spring or summertime?

Stokes II: I wasn’t on campus in the summer, but they have their player workouts. Once the season ended, we would normally take about a 2–3-week break where there isn’t any basketball, like I didn’t even go to the gym. Once about mid-April hit, that’s when the player workouts would come back around noon. It wasn’t like the preseason where those workouts would be in the morning.

Soso: What was your all-time favorite memory or a memory that really stuck with you from those three years?

Stokes II: There’s too many. One that’ll stick forever is the Kentucky game. That was the first time I ever went to The Garden. Just having that moment and being there when Myles (Powell) went off in the second half, I had goosebumps that whole game. Just being there and storming the court that was super fun.

Then I got the opportunity to meet coach (John) Thompson at Georgetown. I spotted him during warmups when the team went back to the locker room and I sprinted to him, he was on the far baseline. I said to him, “It’s a pleasure to meet you”, he stopped me and said “Son, what is your name?” Then I said, “Oh I’m sorry I’m Terrance, it’s a pleasure to meet you”. We just had a quick convo, but that’s something that’ll always stick with me.

Soso: What was it like when you were a freshman, just starting out coming from high school to now working with some of the best players in the country with Angel Delgado, Desi Rodriguez, Myles Powell, and those guys?

Stokes II: Yeah, that was crazy. When I was a freshman obviously that first practice was really like wow, but it didn’t really hit me. My sophomore year when I started to travel more and junior year, it was kind of weird. Everybody sees them as strictly hoopers, but like actually getting to know them, getting to talk to them and form a bond with them, that was something that was special for me. When we were in the Bahamas when Myles Powell got named to the all-tournament team, in the locker room literally the first thing he did when he got his plaque was, he told us to touch it and that it was just as much our trophy as it was his trophy. So, I didn’t necessarily see them as stars, those are like my guys. 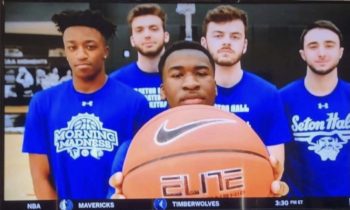 Soso: Is this something that you’re leaving in the rearview as you move on from college, or is this in the field of what you want to do professionally?

Stokes II: So, I don’t necessarily plan on working with basketball, but something that I learned off of doing this is just how connected different sports are. So, even though I won’t be here anymore, there are many things that I’ll be able to take from these past three years. What it is I’m trying to do is work in football and one day be a GM (general manager) and there are things that I learned while managing, like picking up different skills. The importance of having multiple skills so that you look better to any job.

Soso: Did you learn any life lessons or anything about yourself that you didn’t know before you became a manager?

Stokes II: What managing taught me was how much character I have. My freshman year I was active every day and I worked three games that year. I know after freshman year I gave serious thought to leaving because I missed football. But, I was like you know what being a manager here will grant me a college time that I wouldn’t get anywhere else and that a typical student wouldn’t get. So, what I did was I stayed and stuck the course. It gave me more insight to my character and the type of person I was. It gave me a better view of what I want out of life, so I found joy in traveling, I found joy in seeing different parts of the country and the world even. So, that time I spent there really gave me more insight of what it is I want to do further in life, and how I wanted life to be.