The New York City subway is a core part of the infrastructure and transportation in the city. The subway is owned by the city of New York and leased to the New York Transit Authority. It is one of the oldest subway systems and one of the largest in the world, with about 472 stations in operation. Alfred Ely Beach demonstrated the first plans for the first underground train system in New York in 1869 and opened it in 1870; however, this system was never expanded and did not remain active. The actual construction of an underground subway was approved in 1894 about intense blizzards showing those living within the city how beneficial an underground transportation system would be. The subway was opened starting on October 27, 1904, and during this time, riders paid 5 cents to ride the trains. The subway at this time was leased to IRTC (Interborough Rapid Transit Company), and the system was continuing to expand as ridership began to grow.

As New York City grew and the population throughout the city continued to boom due to the massive amount of immigrants coming into the city, the city found itself suffering from traffic, and streets became congested. There were other projects created before the underground system, one of which was an elevated train line that went through a portion of the city. The issue with this mode of transportation was that it was only used by the wealthy, it did not go very far throughout the city, and the train lines were right up against buildings where more impoverished New Yorkers lived. When people realized that this system was not working, they began to look into other options for rapid transit throughout the city that would also help clear up traffic and road congestion. The New York City subway was not the first underground transit system to be built, but the other systems gave the idea to build an underground system in the city. The subway system was constructed relatively quickly for the early 1900s[1] Frank W Skinner, “Difficult Engineering the Subway”, Century Magazine, October 1902, pg. 908-911, and the IRTC first opened the city hall station, which is no longer open, as a showpiece for what was to come. The line ran from the city hall station to 145th street, and the public was in awe at the new mode of transit, and there was significant public interest and celebration of the new construction[2]N/A, “FINISH PLANS FOR SUBWAY CELEBRATION; Speeches to be Made at City Hall — Many Invited. ROAD OPEN AT MIDNIGHT Thousands of Passes, However, Will Be Given for Rides in Daytime — … Continue reading. The subway line went 9 miles when it was first opened. The track was publicized as “City Hall to Harlem in 15 minutes”[3]Museum of the City of New York, Contemplating and Commemorating Rapid Transit in New York City, … Continue reading. The city hall station was meant to be the centerpiece of the new subway system, with vaulted ceilings, a curved platform, and impressive architecture. 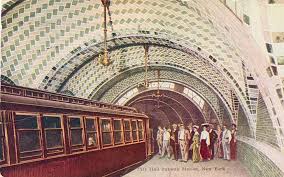 This image is of a postcard depicting the city hall subway station on opening day in 1904.

When the subway was initially constructed, there was much disbelief that the subway system could be built in the city. When the system opened, people found themselves in shock, and this drew people to go and visit the train. New Yorkers were also impressed when the train ran precisely on time as advertised by the IRTC when the subway line was under construction. There are around 15,000 people and a plus one who was invited to ride the system before the subway was open to the public, this information was published in a New York Times article about the opening day of the subway. The article stated, “Those who rode on these trains were the 15,000 invited guests and their friends. The general public would not be admitted until 7 o’clock, and its curiosity was vastly whetted all the afternoon by the unfamiliar appearance of crowds emerging from the earth.”[4] N/A. “As It Nears Completion, Interest in the Subway Grows.” New York Tribune, September 4, 1904, pg N/A At this time, the system was a feat of modern construction, and the newest and most efficient way to travel throughout the city. The first ride was controlled by Mayor McClellan, who was only supposed to control the train for a station or two but decided to drive the train almost the length of the track. There were some issues initially with the trains themselves; however, this did not deter people from wanting to ride or see the subway. On opening day, there was a crowd around the size of 7,000 people wanting to see the station, with about 200 police officers working to control the crowd, as people began to push through to see the station[5]Museum of the City of New York, Contemplating and Commemorating Rapid Transit in New York City, … Continue reading. On this day, around 1,100 people went on the actual train. People bought tickets from different stations to ride on the subway the first afternoon it was open and waited at the stations for the train to come; however, these tickets were not valid for the opening, and the train did not go to these stations. On the evening of October 27, at around 7:00 pm, the subway was open for public ridership, and people could buy tickets to take the subway from each of the opened stations[6]Parsons, William Barclay, et al.  “OUR SUBWAY OPEN, 150,000 TRY IT.” New York Times, October 27, 1904, p. 1 . People waited for hours to buy the first few tickets, with the first person to buy a ticket being disputed with some believing it was a middle-aged woman and others believing it was a superintendent of the board of education. The first crime to take place on the subway system happened on an opening day at around 7:03 pm, when a man by the name of Henry Barrett noticed that his diamond horseshoe pin was missing after he got on the subway[7]Niels, Jensen. New York (Checkerboard Library, New York City 2010), N/A. 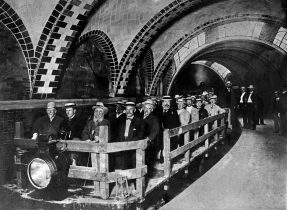 The image shows men riding on the original subway car, in the city hall.

Train delays with the subway also began on opening day, so this issue is not only a modern transit issue. One of the trains blew a fuse right before the system was to be opened to the public, and mechanics could not figure out what happened, so the train was pushed to the last station for repairs, so they could still begin rides on time. During this time, taking the train was an event and, for most, not an everyday occurrence, and people bought commemorative items as souvenirs of the subway. While the city hall station was closed in 1945 because the updated trains were too long to fit at the curved platform, people can still visit the station, by booking special tours to see the old city hall and the station. These tours must be planned, as many people wish to tour this area, and tickets sell out very quickly when the New York Transit Museum releases them. Many of the stations are still open but have been renovated over the years, but certain features and architecture are still there[8]Coppola, Philip Ashforth. One-Track Mind: Drawing the New York Subway. Princeton Architectural Press, 2018..

One issue that the underground system faced was the eventual connection of all of the rail lines and companies, which lead to overcrowding and eventually lead to the subway system the way it is today. From 1904-1908 the system was expanded, and this made the system go to 23.5 miles and made additions to the subway lines throughout Manhattan. There was a rival company at this time that began buying existing rail lines and Brooklyn and created a monopoly on the transit in 1909. By 1910 stores started to open in the subway stations. On October 5, 1910, the Gimbel brothers opened a department store in a subway station, named the Subway Store[9]Parsons, William Barclay, et al. “OUR SUBWAY OPEN, 150,000 TRY IT.” New York Times, October 27, 1904, pg. 1. In early 1910, the subway system was still leased by the Interborough Rapid Transit Company but also leased by Brooklyn Rapid Transit Company, while the city continued to build the lines[10]McCarthy, Cecilia Pinto. Engineering the NYC Subway System. (Core Library, an imprint of Abdo Publishing, 2018), 10. The city eventually opened the Independent Subway System in 1932, which the city both owned and operated. This system was developed to compete with the private companies running the other subways in the city and expanded the subway system significantly. Several years later, the city decided to buy back the leased systems, and combine all of the subways into one extensive system. The merge would prove to be difficult as the integration between the two systems was slow; however, once the systems were connected, it began to work. The New York City subway has a rich history and has played an essential role throughout the city since its opening in 1904. This guidebook article will focus on the opening and early years of the subway, and the impact it had on the town along with the changes that it brought to the city.

When the subway was opened, it was hailed as the solution to traffic in the city. The system continues to grow as it gained popularity throughout the city. As the subway system grew in popularity and size, the IRTC reduced the prices of riding the subway to Manhattan. The subway also helped stimulate the city’s economy as property along the subway system was boosted in price. People were also able to travel throughout the city at a much quicker rate. In the early years of the subway, some accidents resulted in changes made to the subway so people would still ride the system[11] Museum of the City of New York, Contemplating and Commemorating Rapid Transit in New York City, … Continue reading. The subway has become one of the most important modes of transportation throughout the city and still one of the fastest ways to move around. The system that was once considered impossible and a feat of engineering and construction is now part of most New Yorkers’ everyday routine.

Tours of the City Hall station: