The diversity and vibrant history of one of the greatest cites in the world, New York City, can be traced to its ancestral roots. Before the inhabitance of incoming European explorers, the island of Manhatan (Dutch for the present-day Manhattan) was inhabited by the Lenape tribe.[i] The island was traded for 60 guilders or $24 dollars in an exchange between the Lenape Indians and Peter Minuit, the representative of the Dutch West India Company. The Dutch settled in 1624 and would create a civilization, so successful and developed, that the island would soon become a target for other European powers. The English, in 1664, would take over this great city, but would change little of the physical settlement of the Dutch. Today, all over New York City is the history of the Dutch’s inhabitance of New Amsterdam and how it effectively shaped the development of New York City. Fortunately, some of the unique buildings to the Dutch New Amsterdam still have their place in the city today and are tribute to the foundations of New York City. 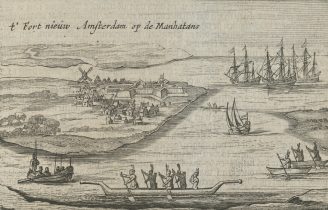 This sketch depicts the people of the Lenape on the Hudson river, which surrounds the Dutch Settlement on the Island of Manhattan. Frederycks, Kryn, “T’Fort Nieuw Amsterdam op de Manhatans.” 1651, New York Public Library Digital Collections.

As famed English explorer Henry Hudson began his exploration into North America, never would he imagine what he would soon discover. After joining the Dutch East India Company in 1609, he became the commander of one of the richest colonizing companies in all of the world. After crossing the Atlantic… END_OF_DOCUMENT_TOKEN_TO_BE_REPLACED

One of the most iconic figures from the beginning of New York City’s history, Peter Stuyvesant was a Dutchman whose ambition for power drove him into joining the Dutch West India Company. Upon joining the company in 1632, he looked to tackle expeditions and lead settlements. By July 1646, Stuyvesant was… END_OF_DOCUMENT_TOKEN_TO_BE_REPLACED

Bowling Green has always been a monumental part of the history of the Dutch New Amsterdam. Before the director of the Dutch West India Company, Peter Stuyvesant was able to acquire it from the Lenape in 1624, this area was a resting ground for the Native American population in Manhattan.… END_OF_DOCUMENT_TOKEN_TO_BE_REPLACED

City Hall, also known Stadt Huys, was the original grounds of where the city hall was. Just like any city hall, the Stadt Huys was the center of the settlers’ lives as it served a variety of purposes. This city hall would become a representation of the unity that would… END_OF_DOCUMENT_TOKEN_TO_BE_REPLACED

Wall Street, although now known for its booming financial industry and the stock market, simply started out as just a wall. “Fearing attack from New England during the first Anglo-Dutch War, [Peter] Stuyvesant built a high stockade fence (later Wall Street) along the northern border of the city in 1653.[i]”… END_OF_DOCUMENT_TOKEN_TO_BE_REPLACED