Following the Footsteps of the Garment District

As with most of the history of New York City, the Garment District has a rich, diverse history starting in the latter half of the 19th century during one of the city’s peaks of urban growth. Also, as with most of the history of New York City, the Garment District was founded on the roots of working-class immigrants. Industrialization in the garment industry began to see transformations and an increase in supply and demand in the 1840s – 1850s, specifically with the arrival of Jewish immigrants [1]. Jewish immigrants from Germany and East Europe immigrated to the United States and carried over business strategies to achieve the quintessential American dream.[2] However, before the Garment District came into fruition, custom-made tailors thrived in growing cities, such as New York City, and Cincinnati, Ohio. Prior to New York City, Cincinnati could arguably be known as the garment capital of the country in the 1830s-1840s. “By 1840, Cincinnati produced $1.2 million worth of clothing.”[3] By the 1870s, garment manufacturers were beginning to be predominantly Jewish owned, and in 1897, three-quarters of the garment workforce were Jewish immigrants. It was not until the early 1900s where New York City dominated all sectors with the garment industry: design and production. [4]

During the earlier days of the garment industry transformation, many of the garment buildings were where the immigrants lived: The Lower East Side, south of Broadway of 14th street.  Prior to the garment factories and buildings, many garment manufacturers operated their businesses in very small factories or even in their own apartments.[5] Whether in larger factories or smaller factories, building and working conditions were very unsafe. Immigrants took low pay and unsafe working conditions because it was the only job they could find.  In chapter two, “The Evolution of the Jewish Garment Industry, 184-1940 in Chosen Capital: The Jewish Encounter with American Capitalism, the author states, here [New York City] a surplus of ethnic labor exists, immigrant preference for working within an ethnic environment can have the effect of allowing employers to further reduce wages and conditions.”[6] The unsafe working conditions became very evident during the infamous Triangle Shirtwaist Factory fire in 1911, located in Greenwich Village. 146 workers died, many of them Jewish immigrants.[7] Although public safety laws were made after the fire, construction of garment factories kept on growing at a rapid speed.

By the 1910s, nearly all “factories and workshops were owned by Russian Jews, and three-quarters of the workforce remained Jewish,” and in the 1920s, New York dominated American women’s fashion.[8] Achieving the American dream was still reigning strong, as quoted from the New York Tribune, 1925, “Men who have risen from obscurity are in the foreground as the owners of the property in the new garment center. Some came to these shores without a cent, and from the humblest surrounding on the East Side, have risen to the front through hard work and sincere effort.” [9] The modern-day Garment District was constructed and developed between the 1920s and 1930s by Jewish architects, developers, and factory owners. This new Garment District took up fifteen city blocks bordered by W. 35th Street – W. 40th Street and Broadway and Ninth Avenue. [10] The center of the Garment District centered around Seventh Avenue and streets just north of Penn Station. Reasons for this location included new subway lines that connected the Lower East Side to the Garment District, the fact that real estate was relatively cheap, and the proximity to Penn Station, which would make it convenient for buyers and garment manufacturers from all across the country to visit factories and showrooms.

The location was also chosen so the garment workers would not interfere with the wealthy and elite. Prior to the modern-day boundaries of the Garment District, garment factory lofts would be on the same street as the Fifth Avenue luxury fashion district. “Affluent women shopping at B. Altman’s and Tiffany & Company found themselves sharing the sidewalks with the working class, immigrant men from the cloak and suit factories out on the street during their noontime lunch breaks.” [11] This introduced the Save New York Campaign, to advocate for the Garment District to be located where it is in modern-day. 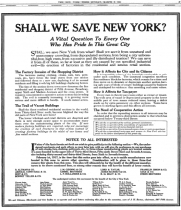 The Save New York Campaign was introduced by luxury department store and hotel owners and bankers on Fifth Avenue who were members of the Fifth Avenue Association.[13] The association’s reasoning for the campaign was that they did not want the factories of the garment district to be near or associated with the luxe and elitism of the Fifth Avenue Shopping District. As seen in the NY Times newspaper article above, The Save New York Campaign was focused on preserving the Shopping and District and proposed this question to the reader, “Shall we save New York from what? Shall we save it from unnatural and unnecessary crowding, from depopulated sections, from being a city unbeautiful, from high rents, from excessive and illy-distributed taxations?[14] Although the campaign was widely supported by many journalists and New Yorkers, in the end, the garment district manufacturers were able to choose the ultimate location of the Garment District.

The development of the Garment District would not be complete without the mention of Abraham E. Lefcourt, born Abraham E. Lefkowitz, born to Russian Jewish immigrants. Lefcourt led the story of the quintessential American dream: from a newsboy on the Lower East Side to a real estate tycoon. [15] While he is little known today, he was arguably the most influential real estate developer during the time of establishing the modern-day Garment District. Lefcourt rose to the top and built over a dozen garment lofts in the Garment District. Soon, the Garment District’s nickname became Lefcourt City, mainly due to Lefcourt naming all the buildings after himself.[16] Like many other immigrants in New York City, Lefcourt worked within his own ethnic community. He hired all Jewish architects to design and create the buildings and lofts because the Jewish architect community could not find any employment building for the Protestant, wealthy elite of the city. The nativist, elite of the city looked highly down upon the rapid construction of garment lofts by Jewish developers. Lefcourt had many critics. An elitist architect critic, Kenneth Murchinson, called Lefcourt as an example of “the worst excess of Jewish builders …. They [Jewish businesspeople] build as they buy any other goods, where they can get them the cheapest …. They care nothing for tradition, nothing for architectural beauty …” [17] While the buildings of the Garment District did not live up to the standards of the elite, they were built to last and stand as a well-oiled machine for its employers. While many Jewish real estate developers of the Garment District, are little known today, the district would not be the fashion business magnet it has become without their hard work and ambition to achieve the American freedom they rightly deserved. Whether the elites liked it or not, the Garment District would soon become a place where all classes and ethnicities would intermingle, signifying a true New York symbol and business destination. 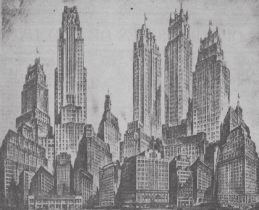 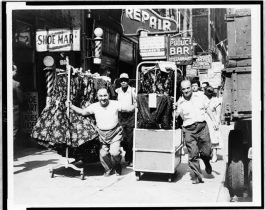 The Garment District continued to prosper throughout the early-mid 1900s. However, after World War II, as soon as New York City began to be known as the “Fashion Capital,” its decline would ironically follow shortly after. This was due to many job losses after the Great Depression

and WW II, the trend of less casual clothing (activewear) being able to be made elsewhere in the United States (Pennsylvania, New Jersey, Texas) and eventually overseas. As unions and manufacturers began to realize they could increase productivity and lessen employee wages by moving outside of New York City, the labor pool for garment work in the city began to decrease in number and in the amount of skill. [20] By the 1960s, garment manufacturers who once had businesses rooted and established in the Garment District moved to “production sites such as Hong Kong, Seoul and Dhaka [that] rose to prominence, fueled by the search for cheap labor,” [21] and in the 1980s over half of all clothing in the country was imported from overseas. [22] Many garment factories that stayed were not able to keep up in the best conditions and were not the most glamorous as seen below in the Amazon Prime TV Show, Marvelous Mrs. Maisel, whose father-in-law runs a garment factory in the Garment District.