New York City has always been a melting pot of different cultures, becoming a home for people all over the world who brought their culture with them into the city. These existing cultures are the reason for New York City’s diversity, but the city not only was a home for culture, it also gave birth to one of the most impactful cultures that even has a lasting effect today, Hip-Hop. It is not only a music form, it also is a dance form, an art form, a way people speak, a way people dress, and numerous other aspects of life. For many people, it is their entire life as it is responsible for giving people a meaning to life and giving them a life’s purpose. From the rough streets of the South Bronx to the rest of the world, Hip-Hop has done a lot of growing since its birth and a lot of the aspects of Hip-Hop culture come straight from New Yorkers.

One may think that such a big movement such as Hip-Hop would not have an exact birthplace, but the development of Hip-Hop is very well documented and preserved due to its importance during the early 1970’s. Hip-Hop started in the Bronx area of New York by the African Americans and Latino communities that lived there during this time. The South Bronx during the early 70’s was a tough place to live as many manufacturing jobs disappeared, leaving much of the Bronx unemployed and struggling. “If blues culture had developed under the conditions of oppressive, forced labor, Hip-Hop culture would arise from the conditions of no work.”[1]Chang, Jeff. Can’t Stop Won’t Stop: a History of the Hip-Hop Generation. S.l.: PICADOR, 2020 In the midst of this depression, a Jamaica-born DJ Kool Herc (real name Clive Campbell) moved into his 1520 Sedgwick Avenue apartment, and this was the start of something beautiful. 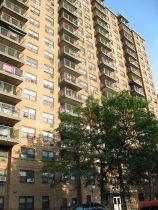 This is a picture of the 1520 Sedgwick Avenue apartment complex that DJ Kool Herc resided in. To many, this is known as the birthplace of Hip-Hop. Early Hip-Hop block parties were a staple in this area.[2]Wikipedia Commons Image of 1520 Sedgwick Avenue. 21 July 2009

The local residents, during this tough time, wanted somewhere to party, and DJ Kool Herc, being a disc jockey, decided to take matters into his own hands and throw block parties at his apartment complex. They called the area that he would throw block parties ‘the Rec Room’ and DJ Kool Herc’s name began gaining popularity in the area and the block parties began occurring on a monthly basis in the Rec Room. While DJ Kool Herc was DJing these block parties, he would notice that people would wait for certain parts of the songs he was playing; the parts of the songs that would ‘break’ which made him realize that people just wanted to groove and did not care about melody, chorus, etc. From this discovery, he began incorporating this sound in his mixes and he gave birth to what is called now “breaking” which is a foundation in early Hip Hop music.[3]Chang, Jeff. Can’t Stop Won’t Stop: a History of the Hip-Hop Generation. S.l.: PICADOR, 2020 From this, other DJ’s began taking the sound that DJ Kool Herc created and began incorporating scratches and other creative ways of manipulating a vinyl record, and people called MC’s or masters of ceremony, began saying rhymes over these beats, so people could dance and sing at the same time to the songs. With this foundation set and the New York City blackout of 1977 which caused many people to steal DJ equipment from stores, Hip-Hop was on a path for massive success.[4]Alridge, Derrick P., and James B. Stewart. “Introduction: Hip Hop in History: Past, Present, and Future.” The Journal of African American History 90, no. 3 (2005): 190–95. … Continue reading

The late 1970’s and early to mid 1980’s witnessed many musical talents that further expanded the sound of Hip-Hop and put a different, more creative spotlight on African American and Latino communities that was not very present prior. Rap groups began forming to make music for the discos and to also spread their message about what they go through in the streets of New York. Grandmaster Flash and the Furious Five are one of those groups, and they are most known for their song “The Message” which not only was a song for the disco, but also they used their platform to spread a message regarding how life was in the housing projects. Here is an example of some of the lyrics that the song included: “I can’t take the smell, can’t take the noise/ Got no money to move out, I guess I got no choice/ Rats in the front room, roaches in the back” [5]“Grandmaster Flash & The Furious Five (Ft. Duke Bootee & Grandmaster Melle Mel) – The Message.” Genius, 1 July 1982, … Continue reading. Rap during this time period was very political and antidrug because during this time, New York City had a huge problem with drugs and poverty, which made rappers feel the need to spread a positive message to the youth and uplift their community. The music began bringing people together, and even had people approach their problems in a different way; through a breakdance battle, which became a main way of dancing to the breaks, scratches, and rhymes that came with Hip-Hop music.

A popular movie during the early 1980’s called Beat Street displayed this aspect of Hip-Hop during the famous breakdance battle scene at the Roxy, which was a very famous club in Manhattan during the 1980’s. The music in the scene is provided by famous breakdancing DJ, Afrika Bombaataa, who is seen as another one of the pioneers of Hip-Hop music.[6]atcoates. “Beat Street Roxy Battle” YouTube video, 5:48. June 29, 2007. https://www.youtube.com/watch?v=zNsMEP0i8aM

With Hip-Hop still being in its early days at this point, there was plenty of room for these New York artists to flex their creative muscles. People began to make Hip-Hop music using their mouths: making drum sounds, clap sounds, and scratching sounds. This became known as beatboxing, and pioneers of it such as Doug E. Fresh, Biz Markie, and the Fat Boys popularized it so much to the point that it even made its way onto the radio, with MC’s rapping over their beats produced with their mouths. Hip-Hop also began taking huge steps to get into the mainstream as the most popular music genre during the time was Rock n’ Roll and the rap group Run DMC was smart enough to make a business move to attempt to appeal to that rock audience. The popular rock band Aerosmith decided to give the New York Hip-Hop group a chance on their song “Walk This Way” and it became a hit, launching Hip-Hop into the ears of people from all sorts of backgrounds, no matter the color of their skin. 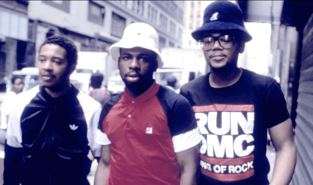 With Hip-Hop breaking the boundaries of being stuck in the neighborhoods of NYC, the culture that was born and raised in NYC was finally making its way around the country in the 1990’s. Hip-Hop artists began rising from all around the globe, and not just from NYC, adding their own areas’ sounds to the music and creating new styles for the genre. A huge transition in Hip-Hop music occurred from this global reach, with a Compton, California rap group called N.W.A., who rapped very vulgar “Gangsta Rap” songs about their unfair treatment by police in the area and began cursing and being brutally honest in their music. This message made its way back to the east coast as rappers began inheriting this Gangsta Rap movement and incorporating it into the New York sound. One of the proclaimed best rappers to ever exist, The Notorious B.I.G., who hailed from Bedford-Stuyvesant, Brooklyn, took this style and brought it to new heights. “[Biggie Smalls] stands out because his lyrics mix autobiographical details about crime and violence with emotional honesty, telling how he felt while making a living as a drug dealer”.[8]Toure. “POP MUSIC; BIGGIE SMALLS RAP’S MAN OF THE MOMENT.” The New York Times, December 8th, 1994. February 18h, 2020. Clearly, Hip-Hop from its early days of being positive took a turn, but it was a popular one as many people related to what he was talking about in his songs and for Hip-Hop, relatability is a huge aspect in attracting an audience. The Notorious B.I.G., alongside west coast rapper 2pac Shakur, were so popular during this time that they started a whole east coast versus west coast rivalry that was taken to such intense levels that 2pac and The Notorious B.I.G. ended up getting gunned down. After the 1990’s, New York never stopped producing Hip-Hop artists that would change the world, and it’s only right to come from the original source, the Big Apple. The early 2000’s gave the Hip-Hop world artists such as 50 Cent and Jay-Z who continued the legacy that was set by the founders of Hip-Hop.

The History of Hip-Hop in New York City is a very important aspect of the history of New York City in general due to where Hip-Hop arose from. It arose from the poor, minority-run areas of the Bronx showing the landscape of NYC of the time. With poverty and struggle brings expression and reflection and with NYC being at a low during the early 70’s in the Bronx especially, people began expressing themselves and made a movement in order to be properly heard. Even when fastforwarding to Hip-Hop in NYC during the 90’s, this was a very crime heavy era in NYC’s history, and the music reciprocated that energy and gangsta rap was the most popular form of Hip-Hop during the time. The music shows the current status of the poorer population of NYC, and when learning about this aspect of NYC history, Hip-Hop music cannot go unmentioned. “Hip Hop has encompassed not just a musical genre, but also a style of dress, dialect and language, way of looking at the world, and an aesthetic that reflects the sensibilities of a large population of youth born between 1965 and 1984”[9]Alridge, Derrick P., and James B. Stewart. “Introduction: Hip Hop in History: Past, Present, and Future.” The Journal of African American History 90, no. 3 (2005): 190–95. … Continue reading. Hip-Hop is a child of NYC and grew up to be a star that represents the culture and history of the world famous city.

Dates:
1849 — 1849
Photo:
This depiction of the Astor Place Riot was published in 1887, nearly 40 years after the riot itself. Included as part of a police chief’s memoirs, this drawing depicts an orderly police force—note the patriotic flags—subduing a rowdy crowd.
Source:
Source: Recollections of a New York chief of Police: an official record of thirty-eight years as patrolman, detective, captain, inspector and chief of New York Police. Illustration from original drawings and photographs. (New York: Caxton Book Concern, Ltd., 1887.)
Link:
http://www.somewhere.org/astor_place