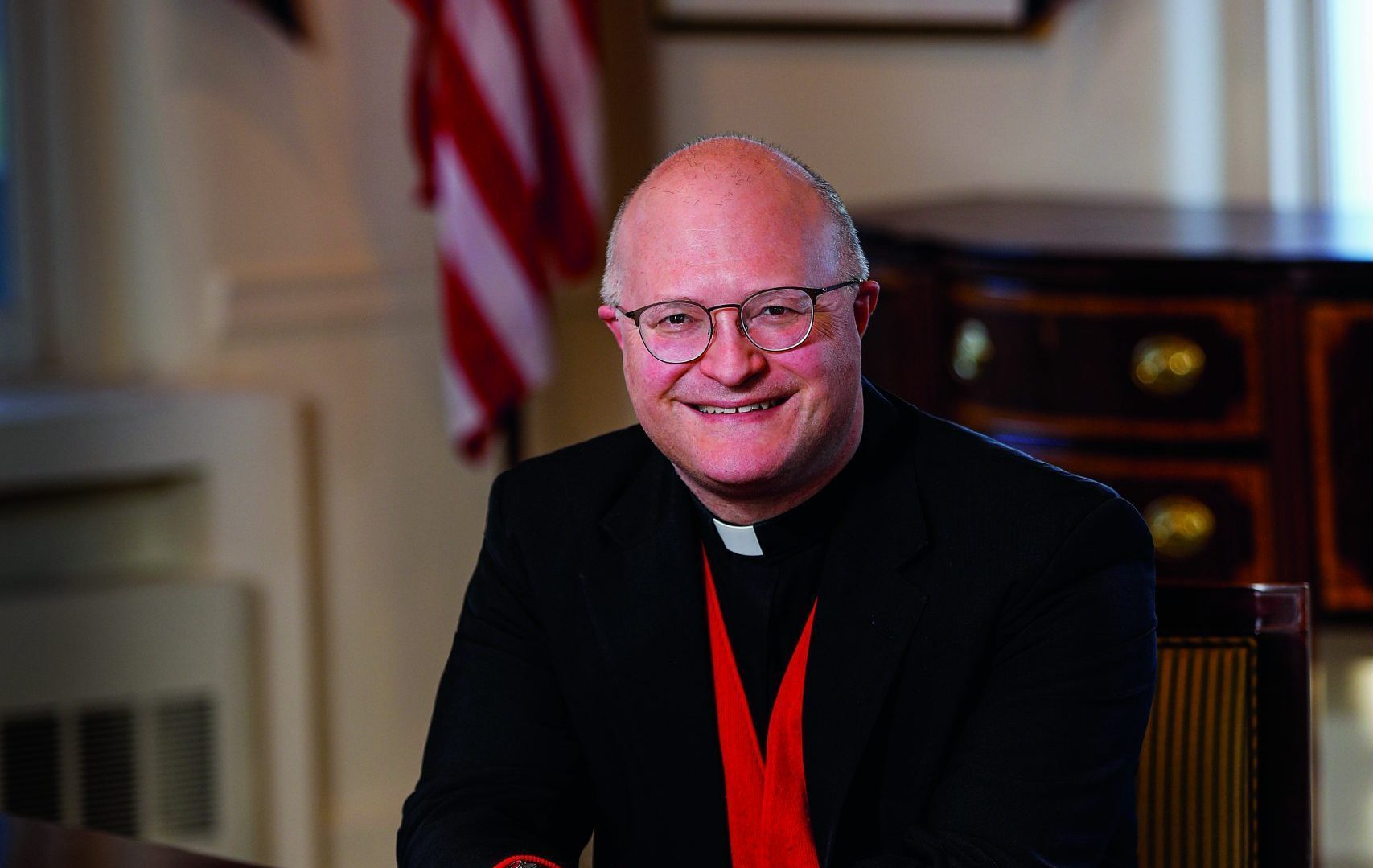 With a background steeped in science, religion and public policy, it might seem that Father Brian Muzás had been preparing all his adult life for the research project he’s undertaken during a yearlong fellowship with the Council on Foreign Relations.

After all, starting in 1996, Muzás earned bachelor’s and master’s degrees in engineering from Princeton and the California Institute of Technology, respectively, then a Master of Divinity degree in pastoral ministry and a second master’s in systematic theology from Seton Hall.

Ordained a Catholic priest in 2003, Muzás was assigned to serve a church in North Arlington, New Jersey, and became active in nongovernmental organizations at the United Nations. In 2008, Muzás began a doctoral program at the Lyndon Baines Johnson School of Public Policy at the University of Texas at Austin.

Five years later, Ph.D. in hand, he returned to Seton Hall, where today he’s an assistant professor in the School of Diplomacy and International Relations and the director of the Center for United Nations and Global Governance Studies.

Now, as a Stanton Nuclear Security Fellow at the Council on Foreign Relations, the New York–based think tank, Muzás is using his experience to conduct research he plans to develop into a book. The subject: four American presidents — Truman, Eisenhower, Carter and Reagan — and the impact of what Muzás calls “religious cultural heritage” on their nuclear arms policies.

The four commanders-in-chief held office at two critical junctures — at the beginning and end of the Cold War. Each pair is a Democrat and his Republican successor, enabling him to draw sometimes surprising comparisons. Underpinning his research is the role of religious cultural heritage, which combines one’s concept of right and wrong, one’s notion of government, and what Muzás calls one’s philosophical anthropology — “a fancy way of saying, ‘What is your theory of human nature?’”

“I call it religious cultural heritage to emphasize that you don’t have to necessarily be an adherent to the religion in order for its ideas — the moral and ethical framework, etc. — to have an influence on people,” Muzás says. “It’s about a spectrum of different nuclear decisions. How do I behave in a crisis? Or deal with a nuclear threat? What types of weapons should I develop or maintain?”

“I’m not saying that religious cultural heritage drives the decision,” he says. “But if we leave that factor out of the analysis, we have an incomplete understanding of the decision-making the presidents do.”

James M. Lindsay, a senior vice president at the Council on Foreign Relations, says the research topic Muzás chose was instrumental in his selection as a fellow. “What struck me is that Father Brian is asking the most interesting question and the toughest one to answer,” Lindsay says. “Understanding American foreign policy, and American nuclear policy, is a lot about understanding why presidents made the decisions they made. What I liked about Father Brian’s proposal is he’s trying to come to grips with that big question.”

Muzás, who spent three weeks at each of the four presidential libraries, recalls coming across drafts of Eisenhower’s famous “Atoms for Peace” speech, delivered to the U.N. General Assembly in December 1953. Eisenhower called for reducing worldwide stockpiles and committing to human aspiration rather than arms accumulation.

Poring through the files, Muzás came across the typed draft on which Eisenhower had written the speech’s substantive central passage — in pencil. Muzás was stunned.

“This is Eisenhower himself, in his own handwriting, writing the part of speech that everybody comes back to,” he recalls. “It’s amazing when you’re going through archives and you find a president expressing his own thoughts in his own handwriting — and so much the better when it helps the crux of your argument. That was a moment like, ‘Eisenhower, I’ve got you.’”