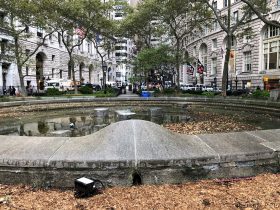 In 1733 Bowling Green was officially designated as a park by the City of New York. Its history goes back far longer though, as it is the oldest park in the City. The park’s patrons have varied greatly over the years, from the Native Americans, to the Dutch, to the British colonists. The park has remained historically relevant by being host to several key events in the City’s history, such as the selling of “Manhattan to Peter Minuit in 1626.” Dutch settlers used the Bowling Green as “a parade ground, meeting place, and cattle market.” The versatility of this historic park cemented its place in the creation of New York City and was witness to the nation’s critical development from its birth to the present. 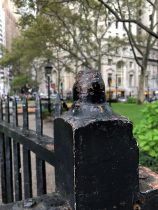 The Bowling Green was the home of the infamous statue of King George III for four years before the start of the American revolution. The statue, erected in 1771, became an emblem of the oppressive nature of the British government. As a result, citizens of New York tore down the statue in 1776 “after the first public reading in New York of the Declaration of Independence,” eventually melting the statue and transforming the metal into ammunition that was fired at the British forces. Currently, the Bowling Green is surrounded by the City’s oldest fence. The original piece featured crowns atop the pikes of the fence, but these were knocked and sawed off by citizens along with the removal of the King George III statue, which can be seen in the photo on the left.

Bowling Green later became the center of New York’s most popular residential area, where residents “could plant and tend the area in return for the exclusive use of the park,” which helped build the favorable reputation of the park and increased public use after a second transition from residential to commercial properties. The construction of the New York City subway impeded the growth and use of the park as a public space for “the first decade of the 20th century” until the rebuilding of the park around 1939. On April 6, 1939, the city held a “rededication ceremony,” which included a “demonstration of colonial-era lawn bowling,” after which the park was named. 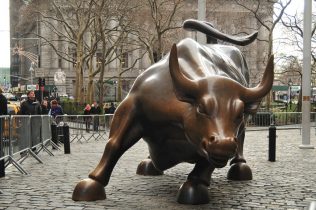 One of the most notable and famous features of the park is the life-size sculpture of a bull placed at the northern tip of the park, named the Charging Bull. Sculptor Arturo DiModica explains that the bronze statue “represents ‘the strength, power and hope of the American people for the future,’” while many people associate the bull with the wealth and prosperity of Wall Street. Previously featured and standing in opposition of the bull was a statue called “The Girl.” She, in response to the interpretation of the Bull as representative of Wall Street, faces off the power and domineering aspect of the upper class businessmen associated with Wall Street.

The Bowling Green of New York City, the oldest and one of the most visited parks of the city, played a significant role in the development of the city and the nation as a whole. Its existence proves the resilience of the American people and the fortitude of our nation.