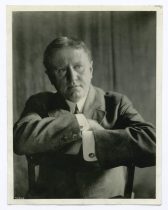 William Sydney Porter, better known by his pen name O. Henry, was born in 1862 in Greensboro, North Carolina. Growing up he liked to read authors such as Charles Dickens and Sir Walter Scott. Porter worked various jobs such as a clerk, bookkeeper, assistant draftsman, bank teller, and even cartoonist as a side job, along with writing sketches and stories. As he entered adulthood, he settled with a wife, Athol Estes, and their daughter Margaret in Austin, TX.

Porter took his first dive into the world of publishing and literature when he bought an Austin newspaper with his business partner James P. Crane and created the Rolling Stone. However, the paper did not gain as much success as hoped, due to ethnic insults and crude humor, and the financial stress that Porter suffered may have ultimately contributed to his embezzling money. The reasons surrounding his decision to commit a crime remain vague; however, even more intriguing is the ambiguity surrounding his decision to avoid his trial and flee to Honduras. He ultimately returned to the United States because of news that Athol was dying, and after her death he was tried and sent to the Ohio State Penitentiary for five years. Although many argue that his time in prison was the inspiration for his literary career, Porter himself stated, “I am not here as a reporter…The prison and its shame are nothing to me” (Luedtke and Lawrence). He sought to rid his reputation of his time in prison, and after his sentence he moved to Pittsburgh and worked on free-lance writing.

Porter finally came to settle in New York when Ainslee’s Magazine offered him money to move to New York due to the close proximity to the growing market for American literature and newspaper writing. Interestingly enough, Porter studied both the high-class areas of New York such as the parks and restaurants, as well as the lower-class, seedy areas of which he found a special interest (Luedtke and Lawrence). The New York that he depicted in his writing included men and women of all classes and places, not just the elite. When he was hired by Joseph Pulitzer to write for the New York Sunday World, Porter was able to move to Gramercy Park on Irving Place. He produced some classic short stories at this time, such as “The Gift of the Magi” and “The Ransom of Red Chief” and also became very interested in play writing. He began to plan a novel that incorporated his favorite themes of “irony, destiny, and fate,” however the project never came to fruition.

Though Porter briefly left New York, he returned and consequently died there of cirrhosis of the liver and diabetes at Polyclinic Hospital in 1909.

Fun Fact: O. Henry’s pen name is thought to originate from the name of his guard at the Ohio State Penitentiary, whose name was Orrin Henry.

Henry’s short story “The Duel” reveals a paradox in the response of the city-dweller to his city. Though it seems that some characters, like Jack, choose to respond to their city by rejecting or escaping it, this response is also a part of the city. Thus, the characters mimic the city even when it seems they are rejecting it, which renders the city as a place that rejects its own identity as a way of embracing. “The Duel” reveals an ironic New York identity, as even rejecting this identity is an inherent part of the New Yorker.

Henry affirms the identity of rejection as a part of the New Yorker’s mimicry. Though Jack, the artist, claims that William has been changed by the city in a way that he has not, his language reveals otherwise. In contrast to the narrator’s lack of any detail as he mentions the West, which may be “Nebraska, or possibly Missouri or Minnesota,” the artist is very concerned with the details of everything in the city (384). He describes the city as “a leech” that “drains the blood of the country…a juggernaut, a Moloch, a monster to which the innocence, the genius, and the beauty of the land must pay tribute” (385). The artist claims that he hates the “vastness and power” of the city, and yet the nature of his language describes nothing but the fullness and splendor of the city (385). He does not distance himself from the city, as his decision to stay affirms; rather, he suggests a new part of the New Yorker identity in which the person rejects in speech the very thing that they are a part of intimately.

Thus, “The Duel” contributes to an understanding of this irony that the deepest mimicry of the city in an individual’s identity is to promote a rejection of the city. Even in the present-day city experience, the phenomenon occurs in which a New Yorker constantly bashes the city while also mentioning the fact that he is from the city over and over. Even in a historic New York, O. Henry describes the innate mimicry that one experiences in the city, whether he realizes it or not.