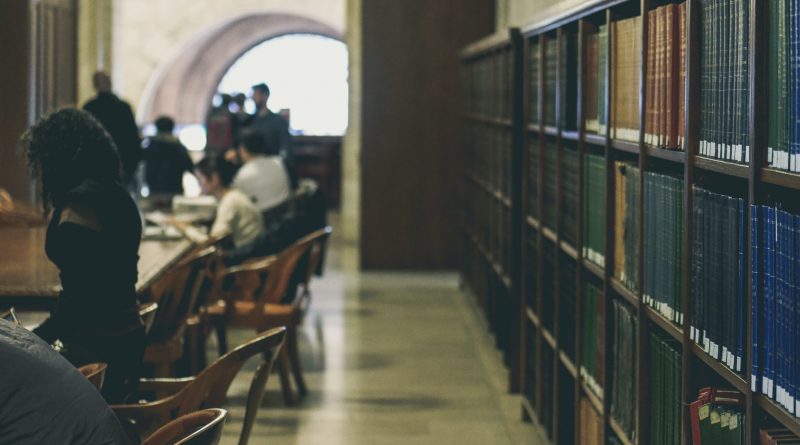 Unlike traditional military and economic sources of power that force countries to balance their international relations through carrots and sticks, soft power allows countries to shape the outcome of world events through attractive power. America’s colleges and universities have long been one of her most attractive assets. Home to eight of the world’s top ten universities, generations of the world’s best and brightest have come to the United States to study. However, the Institute of International Education (IIE) and the U.S. Department of State recently released data that suggests that the attractive power of the U.S. higher education system to international students is slipping. For international education to effectively serve as a source of soft power, foreign students must continue to study in the United States in large numbers.

When thinking of instruments of soft power, one most often looks to a country’s most visible cultural institutions. For the United States, Hollywood and the music industry come to mind. In today’s world, people can stream films and songs directly into their living rooms or phones in an instant; though attractive, the impact is superficial at best.

International education is widely seen as a form of soft power, both in the United States and abroad. While music and films serve as a convenient gateway to another country, the physical presence required by international study allows students to build a unique relationship with their host country. When studying in a foreign country, students are constantly exposed to the language and the culture. These students then return home, bringing that knowledge and their opinions of their host country to their community. 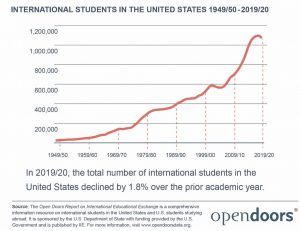 Due to COVID-19, it is expected that the international student numbers for the 2020/21 academic year will decrease catastrophically from the 2019/20 numbers. In 2020, student visa issuance declined to its lowest point in more than twenty years, and early evidence shows that new international student enrollment may have dropped by 43%.

NAFSA: Association of International Educators estimates that “international students studying at U.S. colleges and universities contributed $38.7 billion and supported 415,996 jobs to the U.S. economy during the 2019-2020 academic year.” Many schools have been able to recoup some of the financial value international students bring by allowing them to start their programs remotely. However, the lack of new international students on campuses will impact businesses in local communities. While the economic effect is acute, communities will feel the damage to U.S. soft power from this disruption many years down the road.

Guaranteeing the Future of U.S. Soft Power through International Education

The decline in international students prior to the pandemic should alarm all who value U.S. soft power in the long term. To reverse the current trend, one must understand why students are opting not to study in the United States. For the current academic year, COVID-19 is the most obvious cause, but it would be naïve to suggest that international student flows could be “pandemic-proofed.” The decline indicated in OpenDoors suggests a deeper cause, coinciding with the presidency of Donald Trump.

While it is impossible to solely blame President Trump for this decline, his administration has placed additional barriers on foreign students coming to the United States and created an environment that has caused many to study elsewhere. The travel ban issued just days after taking office directly impacted students from the seven proscribed countries and caused concern that the United States might ban travelers from other countries without warning. Under the Trump administration, student visas became more difficult to obtain and Chinese students and researchers were targeted due to the ongoing clash with China. The chaotic response to COVID-19 significantly impacted international students as well. New foreign students whose campuses had switched to remote learning were barred from entering the United States, and students continuing their programs faced a summer of confusion until the Department of Homeland Security withdrew a policy that would have forced students to leave the country or transfer to a school offering in-person instruction.

The incoming Biden administration faces numerous challenges, and it is unlikely that increasing the number of foreign students in the United States is anywhere near the top of their list. However, the current declining trend, accelerated by COVID-19, presents a threat to the future of U.S. soft power and requires immediate attention. In the short term, this means reversing the travel ban and other policies limiting the ability of students to receive visas for study in the United States. Stability in the visa process will be vital in welcoming students back post COVID-19 and can be done at little to no cost. The incoming administration can, and should, capitalize on formal, government-sponsored exchanges. First, the Fulbright program in China —terminated in July 2020— should be reinstated. Second, the Biden administration should expand existing programs to ensure that the next generation of the world’s scholars continue to come to the United States instead of its competitors. While neither of these options would be without cost, international education and government-supported exchanges have historically maintained strong bipartisan support and their long-term soft power value outweighs the financial cost. Foreign student numbers will rebound to some extent once the pandemic ends; however, policy changes are necessary to ensure the future of U.S. soft power.

Bradley Ryktarsyk is a second-year M.A. candidate in Diplomacy and International Relations at Seton Hall University specializing in Foreign Policy Analysis and Post-Conflict State Reconstruction and Sustainability. He is an associate editor for the Journal of Diplomacy and International Relations. Outside of the Journal, he serves as a graduate assistant in the School’s Office of Graduate Admissions and is participating in this year’s National Security Fellowship. Prior to joining the School of Diplomacy, Bradley spent six years as an international education professional.