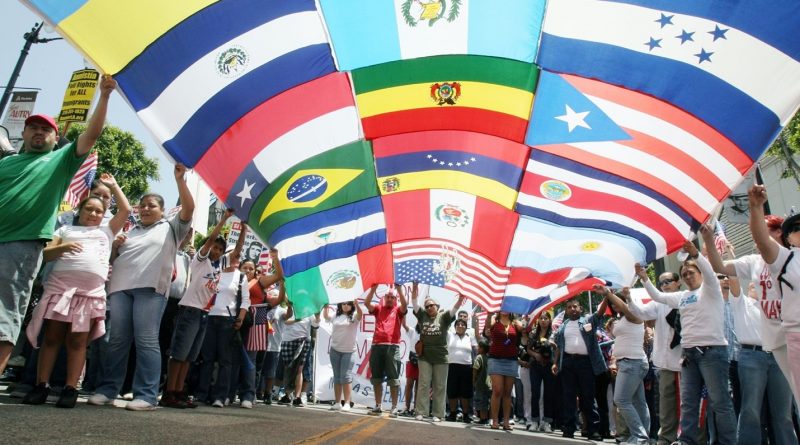 Latinos make up a large population in the United States and are a major contribution to the workforce. The US Census Bureau reports that Hispanics/Latinos make up about 18.1% of the population, and this number is projected to reach to 28.1% by 2060. The US Bureau of Labor Statistics states that Hispanics or Latinos make up 16.18% of the labor force. By contrast, the US Department of State reported in 2016 that 6.8% of its full-time employees are Hispanics.  While there was a surge in diversity among Foreign Service Officers (FSOs) from 2016 to 2017, that number has dropped with the current administration. Since 2017, 64% of President Trump’s ambassadorial nominees have been White non-Hispanic males. There has also been a decline in the diversity of ambassadorial nominees. Given the current crises in Latin America, such as the Venezuela crisis or the Central American migrant crisis,  it is more important than ever to increase Latinxs in leadership roles within US foreign policy.

Latinos in the US impact domestic as well as foreign policies. During El Salvador’s 2003-2004 presidential election, ads ran showing US Congressional representatives favoring the Nationalist Republican Alliance or Alianza Republicana Nacionalista (ARENA) party candidate Tony Saca. In addition, US officials threatened Salvadoran citizens stating that their relatives in the US would be deported and they would no longer receive remittances if they didn’t vote for Saca. US diplomats made blatant press statements about the severance of ties between the United States and El Salvador if Saca didn’t win the presidency. US officials wanted Saca to win the presidency because a win by the opposing candidate would negatively impact US interests  in El Salvador.  This demonstrates the influence that Latinxs in the US can have on the politics in their homelands. This also emphasizes how the politics of one’s homeland can influence their position of where they are now.

It’s very important that Hispanics/Latinos are involved in foreign policy because their experiences are an advantage to understanding international events and issues in their homelands. The diverse cultural background of Latinos can help provide new perspectives, promote inclusive policies, and enhance diplomatic negotiations. Two prominent Latinas in US Foreign Policy are Ambassador Mari-Lucri Jaramillo and Ambassador Mari Carmen Aponte. Ambassador Mari-Lucri Jaramillo was the first Hispanic-American female US ambassador when she served as the Ambassador to Honduras in 1977. Ambassador Jaramillo attributed her success to   growing up in New Mexico as the daughter of a Mexican-born shoemaker. Ambassador Mari Carmen Aponte was born in Puerto Rico and is the Acting Assistant Secretary in the Department of State’s Bureau of Western Hemisphere Affairs. In a 2016 interview, Ambassador Aponte said, “Without question I am taken seriously in the region because I understand the culture and I speak the language.” The cultural background that Latinos, like other races and ethnicities, bring promote US interests abroad in regions where U.S. foreign relations might otherwise be strained.

Although there are numerous organizations and associations that advance Latinos in public policy positions, the same cannot be said for diplomacy and foreign policy. The existence of fellowship programs that help advance minority groups into international relations, such as the Thomas R. Pickering Foreign Affairs Fellowship and the Charles B. Rangel International Affairs Program, demonstrate that minorities are marginalized within international relations. Data from 2017 shows that 13% of degrees awarded in international relations and affairs were earned by Hispanic or Latinxs compared to the 52.1% awarded to White students. It is critical that there is an increase in Latinx students entering the field, but it is important that other minorities are encouraged as well.

To ensure that Latinxs, and other minorities, enter the foreign policy field it is important to introduce the field to younger generations. For instance, starting school clubs or organizations, such as Model UN, at schools in marginalized communities. Additionally, changing school curriculums to include ethnic studies and introduce the history of US- Latin American relations. This will spark the interest of young Latinxs to contemplate on how they can shape future US foreign policy towards Latin America. In higher education, students can be supported by fellowship programs that solely focus on helping Latinx students entering the field by providing professional opportunities.

The issue of diversity within leadership roles at the State Department is more relevant than ever, and its work force needs to represent the current and constantly changing US population. As the Hispanic/Latino population increases, it needs to be represented in Foreign Policy and International Relations.  With U.S. presidential elections occurring in November, whoever the next president is it is critical that they do not go down the same path as President Trump. Given the strides made to increase diversity in the State Department from 2009-2016, it is more important than ever to not revert back to a majority White male dominated workforce in this agency and in this field. With the current pandemic and previous crises in Latin America, it is important to continue to increase Latinxs in leadership positions at the State Department.

Alondra Camargo is a second-year graduate student at the School of Diplomacy and International Relations, Seton Hall University. She is specializing in Foreign Policy Analysis with a regional concentration in Latin America and the Caribbean. This is her first semester working as a social media associate for the Journal of Diplomacy and International Relations. She graduated from the University of California Los Angeles with a degree in History. During her undergraduate career, she took Chicano/a/x Studies courses that helped develop her interests in U.S. foreign policy towards Latin America. After completing her graduate degree, Alondra hopes to work as a Foreign Service Officer for the U.S. State Department.