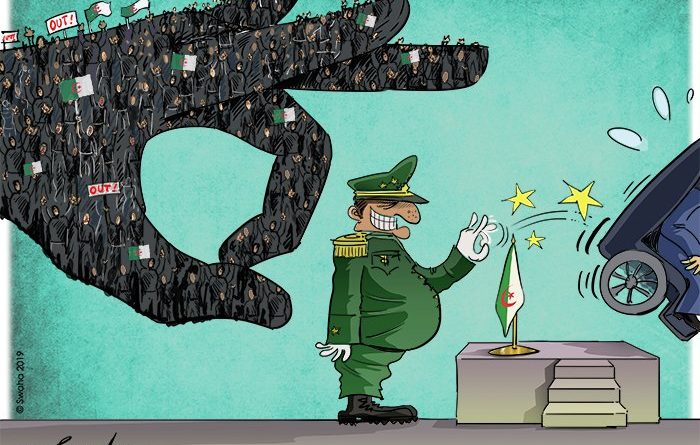 Newly elected President Abdelmadjid Tebboune recently took office in tumultuous times. His first major act as President was to declare a period of official mourning, following the December 23 death of his close friend and supporter, Army Lieutenant General and Deputy Minister of Defense Ahmed Gaid Saleh. Taking the reins during what has arguably been the most turbulent period in Algeria’s modern history, the new President is charged with setting the course for the ‘New Algerian Republic’ that he promised in his December inauguration speech. He faces a number of key challenges in the new year.

Tebboune was elected by only 20% of the Algerian electorate in a presidential election that garnered the lowest turnout in Algerian history – hardly a resounding mandate. Tebboune’s credentials as a regime stalwart since the 1990s and as the military’s pick for presidential candidate make it difficult to believe that he is the face of change demanded by millions of protestors across Algeria. Going strong for over ten months, the Hirak is a leaderless, unstructured movement that has unified diverse elements of Algerian society around shared grievances and a demand for profound change. Although as Prime Minister for a short spell in 2017 Tebboune was outspoken against corruption of certain regime insiders, he remained a staunch supporter of Bouteflika’s fifth term to the bitter end.

In his first public remarks, Tebboune said he wished to be President to all Algerians and expressed an interest in meeting with representatives of the Hirak, even as 300 protestors languished in prison following their detention in waves of arrests last November. Protestors on the streets challenging the very election which brought Tebboune to power were charged with “inciting an unarmed gathering,” “civil disobedience,” or “harming national security.” The January 2 release of 76 Hirak leaders could be seen as an olive branch; however, the uncertain fate of key leaders and hundreds of remaining prisoners begs the question of whether this is a divide and conquer tactic. Moreover, Tebboune’s initial picks for Cabinet Ministers are already being criticized as the “same old faces,” with zero representation of the political forces that have emerged in the past year. While it is still too early to tell, President Tebboune’s actions vis-à-vis these forces – who are likely to challenge him at every step of the way – will be critical to the success of his presidency.

2. The Algerian Military: A Double-Edged Sword

Feared and respected, the military continues to enjoy support from broad segments of the Algerian population, who welcomed its intervention to keep the peace amid mass demonstrations. Guiding the steps of the Algerian military through every phase of Algeria’s political crisis, General Gaid Saleh was an arbiter and security guarantor. Ultimately, he was a source of pressure on the ailing President Abdelaziz Bouteflika and his inner circle to be responsive to the demands of the Hirak protest movement and let go after twenty years in power. The Algerian military’s stated goal was to fill the political vacuum caused by President Bouteflika’s resignation in April 2019. Now that Tebboune is sworn in, will the army under the newly appointed Deputy Minister of Defense General Chengriha fade into the background and let Tebboune lead and deliver on his promises? Chengriha was rumored to be Gaid Saleh’s right hand and a main architect of the military’s strategy vis-à-vis the Hirak, making a continuity-based approach highly likely. One thing is certain: those who rise to the top in the post-Gaid Saleh military reshuffle (currently under way) will shape the Algerian security approach to the Hirak and any economic, political, or security reforms attempted by President Tebboune.

3. Algeria’s Economy: Between Hirak and a Hard Place

The prolonged political power vacuum throughout 2019, and the jailing of many of Algeria’s most prominent business figures on corruption charges, has created deep economic uncertainty. Foreign direct investments have dried up, as key stakeholders attempt to decipher the new rules of doing business in Algeria. In addition to changing the culture of corrupt business practices, the new President will need to make tough decisions on subsidies, import controls, and budget deficit management that have historically been unpopular with the public. Will Tebboune follow in the steps of all his predecessors in attempting to buy social peace with oil wealth instead of doubling down on much-needed reforms?

Besides the occasional statement by the U.S. or the European Union, the international community has mostly remained in observer mode as this crisis unfolds. Algerians in the government and on the streets prefer it this way. With the region witnessing an upsurge in protests demanding change, Tebboune will likely play on the international community’s preference for stability, casting himself as the leader who will bring the crisis to an end. Given the intensifying strife in neighboring Libya, this might seem comforting to those on the outside who would like to see things come to a resolution in Algeria.

The challenges outlined here are only the tip of the iceberg for what awaits Tebboune. While he is the legally uncontested President of Algeria, he has a difficult road ahead to establish himself as the legitimate leader of a newly mobilized and highly energized Algerian polity. Many Algerians worry that when the dust settles on all of this, those who put their life on the line to challenge the system will be discredited. Meanwhile, regime cronies and executives currently in jail will be released, and corruption will return to business as usual. In fact, it was only last week when prominent business magnate Isaad Rebrab was released, with merely a slap on the wrist.

Houssam Eddine Beggas is a 2018 Fulbright Scholar from Algeria.  He is pursuing a master’s degree in Diplomacy and International Relations at Seton Hall University, specializing in international security and Middle East and North Africa studies. Beggas works as a research assistant with the Center for Peace and Conflict Studies at Seton Hall and is an associate editor for the Journal of Diplomacy. He served as a communications consultant with the World Bank in Algeria, amplifying the Bank’s work and advising on projects with the Algerian government. A journalist by profession, he has worked as a daily news anchor, talk show host, and sportscaster. He has also contributed to online news outlets as a reporter and photographer. Beggas earned his bachelor’s degree in Interpretation and Translation from Constantine University in 2012, and holds a master’s degree in Journalism from the Higher National School of Journalism of Algiers from 2016.