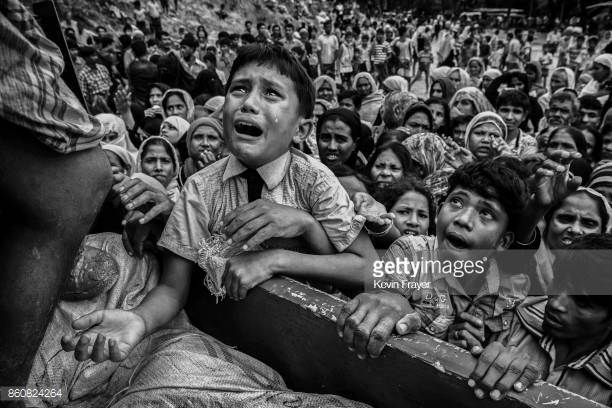 In no uncertain terms, the United Nations states the following: “All individuals, in particular, vulnerable people, are entitled to freedom from fear and freedom from want, with an equal opportunity to enjoy all their rights and fully develop their human potential.” The concept of human security was first included in the 1994 U.N. Human Development Report. The world body cites seven issues of human security: economic security, food security, health security, environmental security, personal security, community security, and political security.

The statement by the U.N. indicating that “…vulnerable people are entitled to freedom from fear and freedom from want…” would certainly apply to the plight of the stateless Rohingya in Myanmar. An argument can clearly be made that none of the seven dimensions of human security are being met regarding the Rohingya. The time is now upon us where more should be done for these people. There have been public condemnations to express outrage over the treatment of the Rohingya in western Rakhine State. Regrettably, there has been one voice missing: the de facto leader of the government of Myanmar, Aun San Suu Kyi who has been silent in condemning this violence. For her silence, Suu Kyi has been castigated by many public officials and; in the last few weeks, the U.S. Holocaust Museum revoked the Elie Wiesel human rights award presented to Suu Kyi in 2012.

Earlier this month, Senator John McCain penned an opinion piece in The New York Times with actress Angelina Jolie titled, “America Should Lead in Saving the Rohingya.” In it they wrote:

“Around the world, there is profound concern that America is giving up the mantle of global leadership. Our steady retreat over the past decade has contributed to a wide array of complex global challenges – a dangerous erosion of the rule of law, gross human rights violations and the decline of the rules-based international order that was designed in the aftermath of two world wars to prevent conflict and deter mass atrocities.” Moreover, they provided several steps the U.S. could take to assist in ameliorating the violence perpetrated upon the Rohingya.

First, we must “end impunity” and hold those who are committing these atrocities accountable for their actions. Further, they called for the passage of the Burma Human Rights and Freedom Act sponsored by Senator McCain, which authorizes imposing sanctions upon military leaders and security forces letting them know that there will be a steep price to pay for their actions.

Second, there must be a fair and independent investigation conducted regarding the violations of human rights within the country, with the U.S. taking the lead on such matters joined by like-minded democratic states. Third, America “must support increased medical assistance for the Rohingya,” especially women and girls who have been subjected to horrific acts of violence. Lastly, Senator McCain and Jolie call for the U.S. to lead the charge in settling the years of “ethnic strife” that has gripped Myanmar. One way to do so, they assert, would be to execute the “recommendations of Kofi Annan’s Advisory Commission on Rakhine State” which would extend citizenship – long since denied – to the Rohingya people.

The term genocide is generally not used in connection with this matter; it has been labelled as ethnic cleansing. Earlier this year, U.S. ambassador to the U.N., Nikki Haley, did draw attention to the plight of the Rohingya by saying the Myanmar government’s denial of ethnic cleansing was “preposterous.” Moreover, the U.N. High Commissioner for Human Rights, Zeid Ra’ad Al Hussein, said late last year that the atrocities waged against the Rohingya may be tantamount to the crime of genocide. He further stated that he would not be surprised if Prime Minister Aung San Suu Kyi had charges imposed against her for the crime of genocide.

The U.N. has indicated that the Rohingya are the world’s most persecuted minority. There are several challenges and obstacles to overcome before this crisis can be resolved. One of the hurdles is extracting information from the areas where the Rohingya are located as the government does not permit anyone access. For example, two Reuters journalists were arrested and charged with violating the Official Secrets Act a law passed in 1923 which prohibits the publication of any official material. The journalists were reporting on the crackdown by the military. The human rights NGO, Amnesty International, has called for their release.

The U.N.’s independent investigator, Yanghee Lee, has called upon China and Russia to oppose the Myanmar government’s violations of human rights. Lee would like to see a greater level of cooperation between the global community, China, and Russia to condemn these actions. Any measures taken against Myanmar requires China and Russia’s backing as they still hold veto power as two members of the U.N. Security Council.

American exceptionalism means upholding human rights and the rule of law for all peoples of the world and; when these norms are violated, assuming the mantle of global leadership and taking the necessary action to halt these atrocities. In his 1986 Nobel Peace Prize acceptance speech, Holocaust survivor Elie Wiesel said that he would never remain silent as the world did during his dark period of history. He further added, “We must always take sides. Neutrality helps the oppressor, never the victim. Silence encourages the tormentor, never the tormented Sometimes we must interfere.” It is my hope that U.S. policymakers would truly reflect upon these words.

Michael Curtin is the Deputy Editor-in-Chief of the Journal of Diplomacy and a second-year graduate student specializing in International Organizations and International Security.

One thought on “The Time Has Come: The U.S. and the Global Community to Stand Up for the Stateless Rohingya”