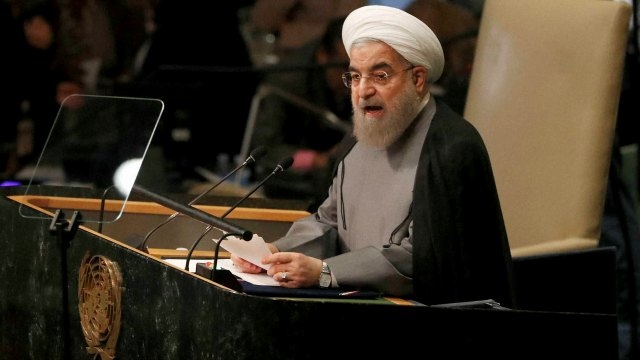 US President Donald Trump’s recent comments on Iran’s nuclear deal have left many confused about his intentions, including his secretary of state Rex Tillerson. Last week, following a meeting on the deal, where he met Iranian Foreign Minister Javad Zarif for the first time, Tillerson said he had no idea what President Trump plans to do.

The Joint Comprehensive Plan of Action (JPOC) also known as the Iran nuclear deal, significantly shrank the country’s program, imposing strict restrictions and supervisions on Tehran’s nuclear ambitions. According to a report by The Hill, it reduced “Iran’s enrichment to less than 5 percent, reducing Tehran’s installed centrifuges by two-thirds (from 19,000 to about 6,000), limiting research, and by reducing its uranium stockpile by 98 percent.”

Considering the situation in the Middle East, with ongoing wars in Syria, Iraq, and Yemen, instabilities with Saudi Arabia, Qatar and on top of that the Kurdish referendum, Trump’s rhetoric on Iran has ratcheted up regional tensions.

Since taking office in 2013, Iranian President Hassan Rouhani has been conducting his foreign policy under the flag of moderation, trying to take advantage of the opening provided by the deal to reduce tensions and build confidence with the West. His message of moderation at the UNGA last week was vastly welcomed by his supporters in Iran. Al-Monitor quoted Sadegh Zibakalam, a prominent political analyst as saying, “Mr. Rouhani’s speech was completely different from that of Trump. He not only was unwilling to adopt Trump’s same tone and language, as the hard-liners expected; on the contrary, he spoke very diplomatically, moderately and conciliatory.”

Barack Obama’s foreign policy toward Iran and the Middle East, followed by Rouhani’s win, created a momentum after more than 30 years since Iran’s 1979 revolution, to bring Iran — a key regional power —  to the international scene, bringing about more responsibilities and transparency for better economic gains for the country. Trump’s administration’s stance on Iran however, is giving more leverage to the hardliners inside Iran to adopt an aggressive path in dealing with the world and the United States. This path is obviously based on military independence, adventurism and maximizing power.

In this week’s Diplomacy Brief read more about Iran’s nuclear deal, as well as other major events of the week, including Germany’s election, Kurdish referendum and Myanmar’s history of violence. The Brief also includes a piece by Stephen Walt on great power politics, relevant to the recent developments in IR.

Is Trump about to repeat George W Bush’s worst mistake?

“If the United States and the world cannot convince Trump to support the Iran nuclear deal and instead focus on real problems, America may once again plunge into a violent disaster in the Middle East, and in the process damage efforts to deal with a country that already has nuclear weapons.”

Does Trump even know what he hates about the Iran nuclear deal?

“There’s no evidence that he does. ”

“It is right to worry about Iran’s growing influence, but the Trump administration may be about to make things worse.”

Trump’s Next Self-Inflicted Crisis Is a Nuclear Iran

The notion that there is a better deal to be had if only Mike Pence shows his “resolve face” is a partisan fable. That’s the logic of walking away from the Agreed Framework with North Korea, shutting down inspections and invading Iraq, and repealing and replacing Obamacare. Every time the people selling this snake oil get it wrong, they act like no one could see it coming. Everyone thought North Korea would collapse. Everyone thought there were weapons in Iraq. Nobody knew health care could be so complicated.

What we are Readin in IR:

Angela Merkel would get my vote. Mutti’s the leader all Europeans need

In the age of Brexit and Trump, when men shout to the cheering galleries about “taking our country back”, and “independence day”, we should all thank God that Europe’s strongest country has a leader who has lived the difference between messy western freedom and true unfreedom, and who grew up in a world where fake news was all you got.

The history of the persecution of Myanmar’s Rohingya

“The British also promised the Rohingya separate land – a “Muslim National Area” – in exchange for support. During the Second World War, for example, the Rohingya sided with the British while Myanmar’s nationalists supported the Japanese. Following the war, the British rewarded the Rohingya with prestigious government posts. However, they were not given an autonomous state. In 1948, when Myanmar achieved independence from the British, violent conflicts broke out among various segments of its more than one hundred ethnic and racial groups. After independence, the Rohingya asked for the promised autonomous state, but officials rejected their request. Calling them foreigners, they also denied them citizenship.”

“There are some Kurdish leaders who still uphold their prior claims and influences over the city, and consequently, there are fears among state and non-state elements in Mosul that Kurdish plans for the territorial annexation of eastern Mosul and areas of Ninewah could be revived and lead to ethno-sectarian clashes when they are least needed. ”

Great Powers Are Defined by Their Great Wars

“And here’s a kicker: The next profound shaping event may not even be a war. The danger of war is ever-present (even today), but perhaps some combination of nuclear deterrence, economic interdependence, good judgment, dumb luck, and careful diplomacy will prevent another great-power war for another 70 years or so. If that is the case — and I hope it is — and if the long shadow of World War II eventually dissipates, then it might be some other vast collective event that shapes our perceptions of danger and our definitions of heroism, sacrifice, and even identity”