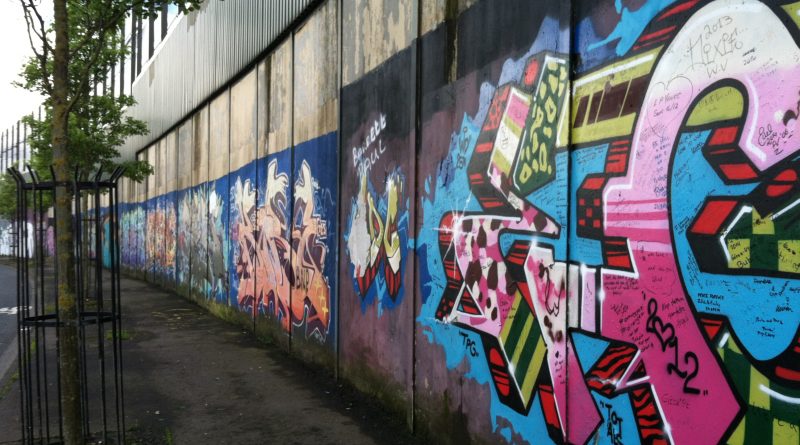 Since the signing of the Good Friday Agreement in 1998, Northern Ireland began its peace process to end decades of armed conflict between Irish nationalists and British unionists.  This treaty represented not only a multi-party agreement between the political parties of Northern Ireland, but also an international agreement between the governments of Britain and the Republic of Ireland. The Northern Ireland Assembly was established as part of the agreement, which would be a devolved parliamentary government body with a power-sharing executive cabinet. Unlike the executive cabinet in British parliament, which only contains members of the majority party, the Northern Ireland Executive is composed of members from both the majority unionist party and the majority nationalist party. The Democratic Unionist Party (DUP) and Sinn Féin comprise the current Executive as of May 2016.

A major obstacle for Northern Ireland throughout the recent years of its peace process is how to deal with its past. Throughout the period known as the ‘Troubles’, lasting from about 1969 to 1998, many people lost their lives to violence from paramilitary groups happening in their own backyards. Two of the most prominent and well-known of these groups are the Provisional Irish Republican Army (IRA) and the Ulster Defense Forces (UVF). Even in the present day, some families who have lost fathers and sons have not received any justice for what has happened to them, and there are also some who still do not know exactly what happened to their lost family members. This has led to the creation of the Fresh Start Agreement.

On November 2015, the Fresh Start Agreement was created and put into action as an agreement to consolidate the peace, secure stability, enable progress, and offer hope. Similar to the Good Friday Agreement, it is a multi-party and bi-national agreement. Even with the end of the conflict, there is still a presence of paramilitary violence, but this violence is limited to those that are predominantly former members of these groups. Northern Ireland Secretary James Brokenshire reported that six people have died in paramilitary attacks in 2016, and 103 people have been arrested for crimes connected with paramilitary activity. One of the main goals of this agreement is to increase efforts in combating organized and cross border crime, both of which often have some kind of link to paramilitary groups. As recently as July 2016, paramilitary-style murders continue to be carried out in Northern Ireland, particularly in the parts of Belfast where this activity was the most prominent during the Troubles.

The current Northern Ireland Minister for Justice Claire Sugden, the sole independent in the current Executive, has very recently set to launch a campaign to highlight the harm that can be caused by paramilitary activity, reports the Belfast Telegraph. She wants to raise awareness among the citizens of Northern Ireland and show how they can become involved in ending paramilitarism. Her department has also been working with the Police Service of Northern Ireland (PSNI) and the Northern Ireland Office in researching the paramilitary style of attacks and how to best increase awareness among the public. Public opinion can be used as an important tool in finding ways to effectively deal with the past, and raising awareness is always a pivotal first step. Many members of the public still have a very strong historical memory of the Troubles, particularly those that grew up surrounded by violence

While these plans look nice on paper, there is still a lot of work that needs to be done. Not only must Northern Ireland must combat paramilitarism and organized crime, but how to deal with the scars of its past. Only recently are murder cases from the Troubles being brought to court, and many families are still searching for answers for what happened to their loved ones. The Fresh Start Agreement has been criticized for lacking urgency. However, perhaps no one in the Executive has figured out what exactly is the best way for addressing historical memory. Arlene Foster and Martin McGuinness, current First Minister and Deputy First Minister respectively, each had their own experiences during the Troubles, thus adding to the difficulty of putting together a plan that will make the most amount of people content. This is a major challenge for Northern Ireland’s current government, especially if paramilitary style murders continue to occur while the government is still trying to figure out exactly how to deal with the country’s violent history.

Erin Dobbs is a second year graduate student at Seton Hall University. She is pursuing her master’s degree in diplomacy and international relations with specializations in foreign policy analysis and global negotiation and conflict management. She received her undergraduate degree in political science and history from Villanova University. Erin is an Social Media Associate with the Journal of Diplomacy.