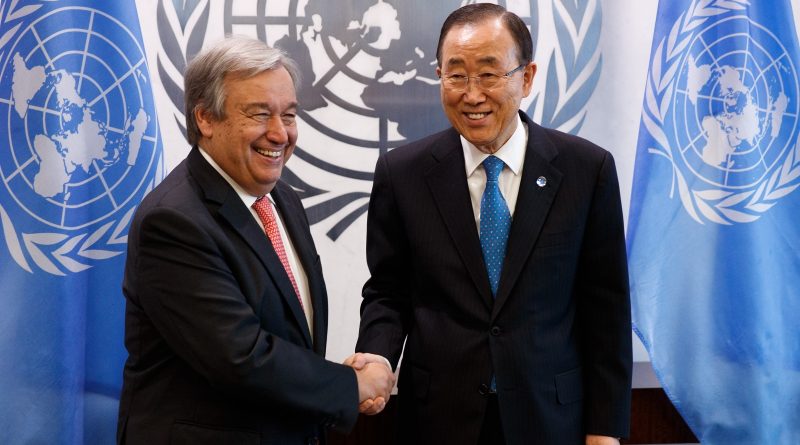 The United Nations appeared in international headlines in the past weeks with the appointment of António Guterres as the organization’s ninth Secretary-General. The Security Council unanimously recommended him to succeed Ban Ki-moon, and the General Assembly formally accepted the nomination last Thursday. Although much has been said about how Guterres beat the odds and led the process to become the first former Prime Minister to assume the top Diplomatic post, now it is time to discuss how to make an effective transition of power and, mainly, of profiles.

Representatives of each regional group welcomed Guterres and commented on the selection process, praising its transparency and openness. The most straightforward statement, however, was made by Ambassador Samantha Power, speaking on behalf of the host country. After congratulating Guterres, she touched on two important points that must be kept in mind. While addressing broken expectations of a first woman Secretary-General, she described Guterres’ capacities and background that made him the best candidate for the post. Although being a woman, as she joked, was not one of them, his vast experience as former Prime Minister and High Commissioner for Refugees allow him to bring to the job both his “head and heart.” Ambassador Power, one of the few women to occupy the role of Permanent Representative of the U.S. to the U.N., praised Guterres’ pledges of gender equality in the working place. Guterres has demonstrated that he is fully aware of the expectations to select a woman for Deputy Secretary-General and other U.N. senior posts and seems truly committed to the cause. Gender equality and empowerment of women were one of the main points discussed in his Vision Statement submitted to the General Assembly at the beginning of the selection process.

This leads us to Power’s second point: how can the U.N. go back to serve its purposes? The General Debate of the 71st Session, last September, underscored shy and general statements on relevant issues such as gender equality. The most prominent speeches to address the issue linked women empowerment with the perspective of achieving other aims, like the Sustainable Development Goals. On the other hand, robust opinions were heard on calls for U.N. reform, especially in regards to both membership and working methods of the Security Council. More than just discussing the veto power of its five Permanent Members (the United States, the People’s Republic of China, France, the United Kingdom and the Russian Federation), member states debated over the effectiveness of the United Nations on Global Governance.

The General Debate usually marks the debut of the new session and a unique opportunity that Heads of State and Governments have to address the General Assembly and, by extension, the world. No matter the country’s size or the State’s degree of power in the international system, each of the 193 member states has the chance to disclose the causes of their struggles and what they are doing about it. In short, the General Debate reflects the world’s major concerns. As recently seen, some countries prefer to play on the safe side and restrict themselves to only mentioning imperative issues. For the U.N. to keep up with the world’s expectations and prevent drift to irrelevance, this is not enough. Haiti’s critical situation in the wake of Hurricane Matthew reflects that. The U.N. has been struggling to address the humanitarian crisis that desolated the country, fostered by cholera infection introduced by U.N. peacekeepers in 2010 and slow response by the international community to the organization’s emergency appeal.

In addressing the General Assembly last Thursday, Guterres did not deny the challenges and limitations of the job and of the organization in general. As a former head of government and U.N. commissioner, he knows how to play on both sides. The wider selection process has much to say about the suitability of the candidate elected and it is a strong response to controversy and claims of ineffectiveness. As Samantha Power argued at Guterres’ appointment, “for the U.N. to succeed, we are asking you to act as a peacemaker, act as a reformer and to serve as an advocate, rallying the world to respond to humanitarian and man-made catastrophes and defending the human rights of all people.” As the world urges for results, Guterres arrives with the expectation to restore faith in the United Nations. Whether it is going to be a smooth transition, it is hard to say. Smooth, however, should not be the word of the day. A little friction might shake things up at the UN Headquarters.