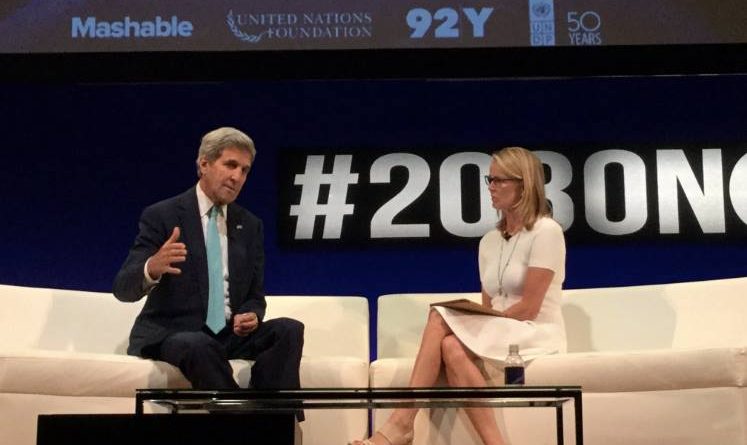 The 2016 Social Good Summit, held in New York and sponsored by the United Nations Foundation, allowed celebrities, members of the private and public sector, activists, and NGO representatives to come together to dialogue on the issues most important to them. Secretary of State John Kerry, Ambassador to the United Nations Samantha Power, and Vice President Joe Biden were among those who took the stage at the summit.

Secretary Kerry, in an interview with Katty Kay of the BBC, focused on the evolution of American leadership abroad. Despite the tension of the Cold War, the détente created by US-Russian bipolarity created a relatively stable international system. The world has struggled to address the complexities of the non-traditional security threats that emerged in the wake of the Soviet Union’s collapse, and each US administration has relied on a different theory of grand strategy to guide America through uncharted waters.

The Obama administration’s more opaquely defined grand strategy has differed greatly from those of his predecessors and has garnered both curiosity and criticism from opponents. Varying responses to crises and the lack of a clear doctrinal statement has caused some to question whether the administration has a grand strategy at all.

In his remarks to the Social Good Summit, Kerry addressed the issue of strategy head on.“I keep hearing people say well, maybe America is retrenching or the Obama Administration isn’t tackling this,” said Kerry. “I want you to know unequivocally, and I’ll argue this anywhere in the world, the United States of America is more engaged, more actively, more positively and constructively, in more places at the same time than at any time in American history.”

For Kerry, engagement is not just measured in military terms. Worldwide humanitarian relief, global treaties, and negotiation are just as much part of the administration’s strategy as coercive diplomacy. The administration has chosen to address humanitarian and social issues head on, and, in doing so, hopes to prevent conflicts before they arise.

When asked what he could do, as a diplomat, to help address worldwide inequality, Kerry did not hesitate to call for further humanitarian engagements.

“I think what we need, frankly, is a larger commitment by the United States to help lead other countries,” said Kerry, likening his vision to a modern-day Marshall plan, where the developed countries of the world could come together in support of the Global Fund which helps to combat epidemics.

Though such a plan may seem overly ambitious, Kerry remained optimistic, citing the recent success of the Paris Agreement on Climate Change.

2016 has been a trying year for diplomats and policymakers. In addition to dealing with seemingly daily crises emanating from international instability and terrorism, the US has become party to the Sustainable Development Goals, which seek to address such broad issues as inequality, hunger, education, and climate change. According to Kerry, to be able to navigate the world’s complex problems, the State Department must be great at multitasking. Kerry expressed pride at the work the department has been able to accomplish given the year’s events and a limited budget.

Throughout the conversation, Kerry emphasized the necessity of multilateralism and engagement. In a world that is becoming ever more connected, it is impossible for a state to withdraw without sacrificing its economy and interests. By helping those around the world, Kerry hopes that the US will benefit too.

”There is no way just to take care of yourself in today’s world.”

Emily Fox is the Editor-in-Chief of the Journal of Diplomacy. She covered the 2016 Social Good Summit as a Blogger Fellow for UNA-USA.