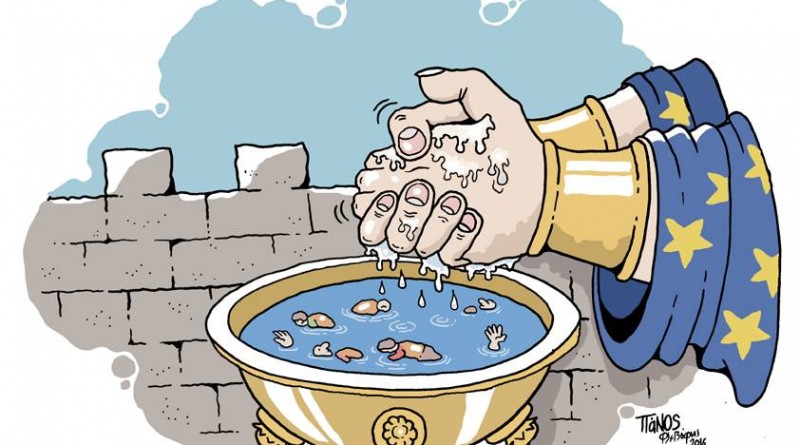 The migration crisis has Europe in a state of emergency, and the European Union’s actions are rapidly diminishing its footing as an important player in the international arena. To ensure its own survival, the EU needs a fast-track emergency approach to tackle the refugee crisis. To effectively control migration flows, European leaders must address the root causes of migration. The EU must act as a unit and help to broker an end to Syria’s civil war, restore stability in Libya, and provide aid in sub-Saharan African states. However, what the EU eventually did, was to bend the knee to Turkish demands.

Under the final agreement, Ankara will take back Syrian migrants who reach Greece illegally in return for the relocation in Europe of Syrian refugees now in Turkey in hopes that forcing refugees back to Turkey will dissuade them from crossing the Aegean, while also upending the human-smuggling trade. In return, the EU will grant visa-free travel to Turkish citizens, as soon as this summer, accelerate Ankara’s EU membership application and increase financial aid to help Turkey manage the refugee crisis by €3 billion to €6 billion. How exactly this deal is in accordance with EU and international law and a viable solution is baffling to many concerned voices.

Unlike the United States, Europe has historically taken an ethnic approach to in developing national identity, which is part of the reason immigration is proving so difficult to handle. So far, all policies to tackle the refugee crisis have failed. The Dublin Regulation has proved to be unsustainable, the agreed relocation mechanism is not applied by the member-states, the initial deal with Turkey has not shown any significant results.  Along with the abysmal quality of life in many refugees camps , there has been no consensus on a joint European migration plan.

The only solutions European Union (EU) member-states seem to agree on are closing borders, adopting deterrent tactics to discourage the refugees and installing national refugee quotas. Most countries along the Balkan route have been uncooperative in letting migrants pass through their territory. Given the recent rise of nationalistic tendencies in European countries, there has been  pushback at the national level with regards to migration flows. With some countries imposing increased restrictions on the number of people they take in, on the basis of socio-economic conditions, marital status, country of origin or religion. As a result, the European Commission’s proposal for handling  migration, especially the quota provision for controlled relocation of migrants within the EU was not well received by member-states. Since the Paris attacks, the situation has only worsened.

As long as the EU refuses to discuss a political solution to migration the lack of a coordinated and proportional response will continue to feed sentiments that will make unilateral practices such as closed borders, barbed-wire fences and maritime pushbacks the policy norm rather than the exception. These are practices that not only endanger migrants and refugees, but also the very ideals upon which the EU was founded.