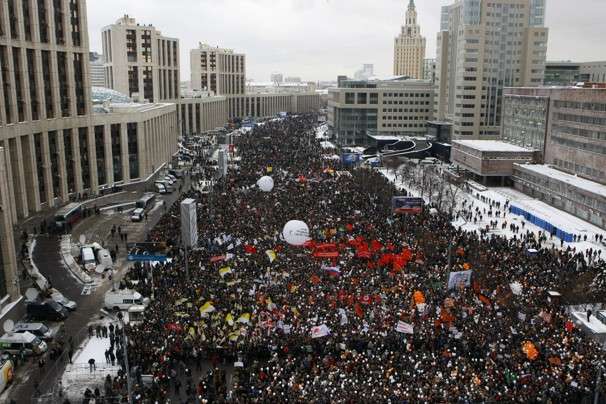 Starting in January 2014, Kazakhstan has seen a wave of protests in the streets of Almaty, the country’s largest city and its main commercial and cultural center. These protests have ranged from concern about currency devaluation to the enforcement of legislation regarding women’s undergarments. While the protests, which are rare in Kazakhstan, are telling of the current political and economic climate, the rapid and powerful nature of the government suppression speaks volumes of how little the Kazakh landscape has changed since the end of Soviet rule twenty-three years ago.

A common theme among the protests appears to be an ingrained desire for a change in governance. Before his incredibly long tenure as Kazakhstan’s president, Nursultan Abishevich Nazarbayev spent over a decade serving the communist party under Soviet rule. He was named the President of Kazakhstan by the Supreme Soviet (a name for the legislative bodies that ran the Soviet Republics under the USSR), and has now won four elections as President of Kazakhstan, averaging 91.28% of the electoral margin. When Kazakhstan gained independence and created its current Constitution, the people created a system of a two-body legislature, a president with a three-term limit, a justice system, social security, and a number of military bodies. In 2007, President Nazarbayev got rid of constitutional limitations on his career as President, allowing him to run indefinitely, although allegedly his successors would not be able to exercise the executive freedoms Nazarbayev has enjoyed. What does ’democracy’ mean when the president consistently enjoys not only complete discretion on the rules of the game, but also a 90% electoral base of support? We should expect similar electoral results in April, where President Nazarbayev himself has called for elections to be held a year early, in the very city so wrought with political agitation.

The protests themselves were originally sparked in response to an overnight 19% devaluation of the tenge (Kazakhstan’s currency), which for the people of Kazakhstan means markedly more expensive imports coupled with one-fifth less purchasing power of their current salaries and savings. According to the government, the devaluation was an attempt to anticipate changes in the exchange rate with the Russian Ruble. This puts into question the previously strong and stable monetary policy that has been propping up Kazakhstan in light of few property, labor, and small business rights.  Not only that, but protestors have expressed concern about rapid inflation should the cost of imports rise dramatically. Kazakhstan imports a lot of what its population relies on to maintain their standard of living, from furniture and linens to medical supplies, computers, and refrigerators, while it exports mainly crude petroleum, copper, and wheat. Kazakhstan relies on Russia’s economy to support a lot of its own economic activity, and when sanctions are placed on Russia, the Kazakh populous feels it. There seems to be very little suggesting concrete independence from Russia, and its corrupt government appears to the people to be more invested in placating Russian interests than its own. Kazakhstan appears to also be struggling in finding investors to help solidify more economic independence, despite large reserves of both uranium and oil. According to a recent article in The Diplomat,

“There are many disadvantages to investing in Kazakhstan: a landlocked geographic location, “lack of experience and financial capabilities among representatives of the Kazakh business community” with a non-democratic government, corruption, lack of transparency, lack of civil rights/liberties, and an uneducated workforce. Kazakhstan’s political and diplomatic dealings could also have implications for investment. Foreign companies are reluctant to invest in state-owned enterprises or joint-stock companies given complications with government and state regulations, the possibility of re-nationalization, and disagreements with governments over the equal distribution of funds or the notion that a government might feel like it is being cheated (as seen in Kyrgyzstan’s Kumtor gold mine).”

The government crackdown came in hard and fast. Dozens of protestors were arrested on the 15th of February, as the mass of hundreds of people moved towards City Hall. Police enclosed them, chasing after those who fled, and warned via microphone of the ramifications of unlawful assembly. The Kazakh government allegedly requires 10 days notice with government approval before any public demonstration, and given the “hail of bullets” that protestors experienced in Zhanaozen in 2011, government suppression of media and political activity looks to be getting only more severe. According to several analysts, President Nazerbayev has played a significant role in trying to bring peace to the Ukraine, and is clamping down on the Kazakh people’s freedoms because he fears similar turmoil within his own country. He sees himself as a potential President Viktor Yanukovich, ousted by protests, fleeing the country, and helplessly watching Russia invade and clampdown on pro-Western movements and boosting the ethnically Russian portion of the population.

To the average citizen in Kazakhstan, however, Putin’s rule and Nazerbayev’s rule may already not be all that different.