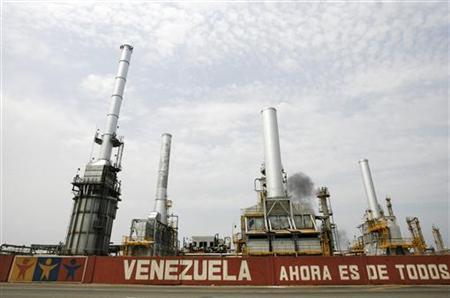 While drivers across the globe celebrate the rapid decline in gas prices, the repercussions for exporting nations are worrisome. Saudi billionaire  Prince Alwaleed bin Talal recently remarked that the world would never see $100 a barrel for oil again, describing the price point as “artificial” and “not correct.” Yet the high supply and weak demand from a world economy still trying to regain confidence has not deterred producers from continuing current levels of exporting oil products. As the Prince noted, doing so would cause a loss in market share for the competitors which choose to do so. Thus, OPEC members have continued oversupplying the international market in face of slowing demand.

This snowball effect is developing a dangerous trend particularly for nations which depend heavily on oil and face potential tenuous political environments at home. In Venezuela, which experienced massive protests and riots against its abusive government only months ago, oil exports remain a key part of its economy. Ranking as the world’s 12th largest producer and 5th in the Americas according to the U.S. Energy Information Administration (EIA), Venezuela’s prospect for economic downturn is increasingly tangible.

As Tim Worstall at Forbes highlights, a major reason behind Venezuela’s turmoil is in its decision to set prices through its government. In doing so, government policy has determined the price of a variety of products causing shortages and unnecessary surpluses on everyday goods. Now, the oil market’s nosedive is worsening the undermining of the economy at a time when its future already looks bleak.

Currently, Venezuela exports approximately 1.7 million barrels of oil per day. Having seen a 50% decrease in the international market in barrel prices in the last six months, without a significant change in production costs and delivery systems, one of Venezuela’s major revenue sources has been crippled. Put bluntly, potentially $30 billion in oil revenue has disappeared in less than six months, which would represent 6% of its GDP. Such a loss is similar to the numbers the U.S. experienced at the onset of the recession in 2008.

But Venezuela is not the U.S. Nor does it have the economic capabilities, as well as institutional security to bounce back in the face of the international market’s radical shift. In 2008 the U.S. voted for change, today Venezuelans may well force it, with their feet and arms rather than ballots. With a less diverse economy, Venezuela needs a stable and growing oil market in order to maintain order among its increasingly disgruntled populace. Without such stability, the political upheavals that are brewing seem only to be expedited to the forefront.

The political situation is tense. Nicolas Maduro has been vocal in opposition to the United States in wake of their support for more open political discussion. His actions and demeanor resembling what The Guardian described as “rhetoric reminiscent of his mentor Chavez’s 14 year rule.” Simultaneously, overcrowded prisons have experienced riots and bloodshed in the past months, seeing hundreds killed while those outside the walls struggle to eat and survive. The government has done little to answer the inmates’ questions, while simultaneously blaming political rivals for the protests stirring in the streets.  Jailed political activist Leopoldo Lopez continues to fight for his freedom in the courtroom, despite the accusations that such a trial is merely for show as the government moves to squash movements that oppose their policies. International diplomacy has seen various results as Venezuela vies to adapt to the changing market.

Attempts to cooperate with other OPEC members have been met with mixed reaction. While Venezuela has gained assurances from Iran to help adjust the market back to its optimal output and demand, Saudi Arabia denied their request, due in part to their desire to maintain a large portion of the market.  The driving forces of competition in the international market have separated the OPEC coalition of old that administered gas shortages in the U.S. in the 1970s. Today, these countries seem to be fighting one another to maintain their position in the international oil market.  If this trend continues, Venezuela may be facing issues both in oil exports as well as at home. Without being able to handle calls for greater liberties from its citizens, as well as keeping a stable economy where opportunity is available for them, the current regime could be experiencing greater levels of unrest than it saw last year in the streets of Caracas.

Patrick Balbierz is currently a master’s candidate at Seton Hall’s School of Diplomacy and International Relations. His current research is on educational institutions and their relation with religious terrorism. His past writings involve human rights, U.S. security policy, and religious ideological developments in the Middle East.​