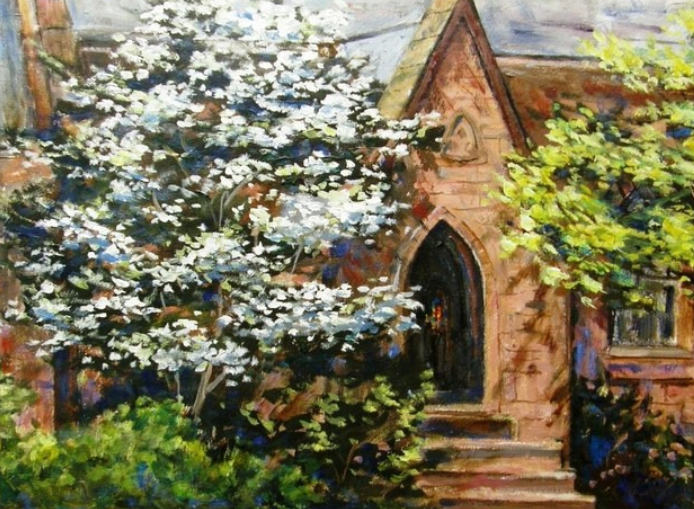 On February 6, Seton Hall’s community celebrates the 150th anniversary of the dedication of the chapel. The dedication of a church is when the church, by the authority of the bishop, officially recognizes and blesses a building and names it an official place of worship within the Catholic Church.

In 1860, Bishop James Roosevelt Bayley moved the newly formed Seton Hall College from Convent station (on the Madison-Morristown border, where The College of St. Elizabeth is now situated) to a tract of land in South Orange, NJ. This small cluster of buildings, including what is now known as President’s Hall, became the new Seton Hall.

Construction of The Chapel of the Immaculate Conception at Seton Hall began in early 1863, with Mass being celebrated merely six months later. Seven years later, the building was consecrated by Archbishop Michael Corrigan, sitting bishop of the Archdiocese of New York.

Ever since our chapel was first built, it has been the true heart and cornerstone of Seton Hall and its whole community. Even today, Seton Hall’s community returns to the same place every day to fulfill the same purpose as it was created to do: provide a place for the people of Seton Hall to receive the sacraments and to build Christian virtue.

In the past 150 years, countless students, faculty, administrators, seminarians, and priests have turned to this building to find Christ. St. John Henry Newman often spoke of how the point of the Catholic university is to make holy and well-formed students and to form them into productive members of society. The chapel is the natural place for people to allow themselves to be formed in this way.

Sarah Hollcraft (’21) noted that as a student from far away, “The chapel is important to me because it was the first place I felt at home in New Jersey and is still the only place I can go that cures my homesickness.”

This paints a perfect image of what the chapel has always been to the students of Seton Hall: a second home. For many students, it is also a place to encounter Jesus Christ in the sacrament.

Victoria Newman (’21) says, “Through His presence in the Immaculate Conception Chapel, God continues to to reveal Himself in many ways. When I recall many times that I have been filled with thanksgiving for the Eucharist, I see the bigger picture of God’s powerful work in my life.” Today, students still come to the chapel to find a brief respite from the rush and pressures of collegiate life.

In this spirit, the chapel hosts dozens of weddings each year (over 4000 since 1969). My own parents, Joseph and Catherine McGlone, alumni of 1985 and 1989, were in this very situation and chose to begin their lives together in the building they have come to love.  Alumni from all over come home to the center of their most formative years to start new lives, many times with people whom they met at Seton Hall.

Beyond being a place for students to come to know and love Jesus, the Chapel has been a home for hundreds of young men to begin to discern a call to Holy Orders. Originally it was intended to be used as a seminary chapel. Indeed, with the chapel being used as the predominant place of worship for close to six decades, the chapel has served as a place for instruction and formation for the priesthood for hundreds of seminarians and priest.

Fr. Gino de la Rama, Director of Vocations for the Archdiocese of Newark and member of the Seton Hall Priest Community said “The chapel was important to me during my time at the Immaculate Conception Seminary because it was there that I was able to see the beautiful intersection between God God and the people He was seeking to love, which only confirmed my vocation to the priesthood.” He called the chapel the “pumping heart of grace, without which our whole campus would lose its soul.”

For many priests the chapel is a place to see this love of God and how He desires them to live, in pursuit of His grace and the opportunity to serve Him. The Chapel still fulfills the original purpose for which it was built, to train the next generation of men to become good priests of Jesus Christ.

The chapel has undergone several complete renovations in the past 150 years. In fact, only three things remain from the original decorations of the chapel, parts of the pews, the altar rail, and the hanging sanctuary lamp. Despite the fact that so little is the same from 150 years ago, the purpose of the chapel has always been the same: to bring the people of Seton Hall to grow in their love for Christ.

Most recently, the chapel was restored to make small repairs to the decorations and to repaint and restore the artwork on the walls. Further, the high altar and tabernacle behind the altar were completely renovated. In many ways the chapel has very few cosmetic similarities to the original decorations in 1870, but the purpose and the function of the chapel is entirely the same, to serve the students and the people of Seton Hall to come to grow closer to the person Jesus.

It may seem to some that the chapel is just a stagnant place where little changes and nothing of substance occurs. But quite the the opposite is true. With more than 15 Masses celebrated every week, it is one of the most well-used places on campus. In addition to its being a place for Holy Mass, the chapel serves the students in many other ways. Confessions are offered every weekday before the noon Mass, and every Wednesday night for an hour.

Nate Valyo (’21) spoke to me about how having confession so readily available at Seton Hall has influenced his experience in college. He said, “Confession being available each and every day gives me a tremendous amount of peace because it reminds me that at any moment, I can have a fresh start.” Three times a week, the Blessed Sacrament is exposed in the Sacrament to give the university community the opportunity to spend time before the Eucharist Lord. Other events in the chapel include weekly public recitations of the Rosary, a monthly Holy Hour called “Pack the Chapel”, and special Masses, such as the occasional Traditional Latin Mass.

However, beyond the specific events that occur there, perhaps the most normal event for many students in regard to the chapel is to just stop in for a minute between classes or after a difficult exam. The building is a place for students to rest and rejuvenate during a long day. Graduate student Nicole Oppenheimer (’21) says that “the quiet of the chapel is a place that I can always go to to find peace.” Having a place like the chapel to encounter Christ in silence and serenity is something that cannot be discounted.

150 years after the dedication of the Chapel, it is clear that it is still a place for people to come to grow in the virtues espoused by the Gospels. The chapel has been a home for students to come to know Christ and to prepare themselves to be good stewards in the future. It has become a favorite place for alumni and faculty to join in the sacrament of matrimony. It still is a place for people to discern Jesus’ call for their lives, and to join in the paschal mystery and the holy sacraments of Baptism, Eucharist, and Confession.

If any student has never had the opportunity to spend time in the chapel, I encourage you to go inside. Sit down and admire the beauty of the place. Allow the serenity and silence to encourage you and prepare you for the rest of the day. For both those who have loved the chapel since their first visit and for those who simply walk past it every day on their way to class, over the past century and a half, the Chapel of the Immaculate Conception has truly become the heart of Seton Hall University.