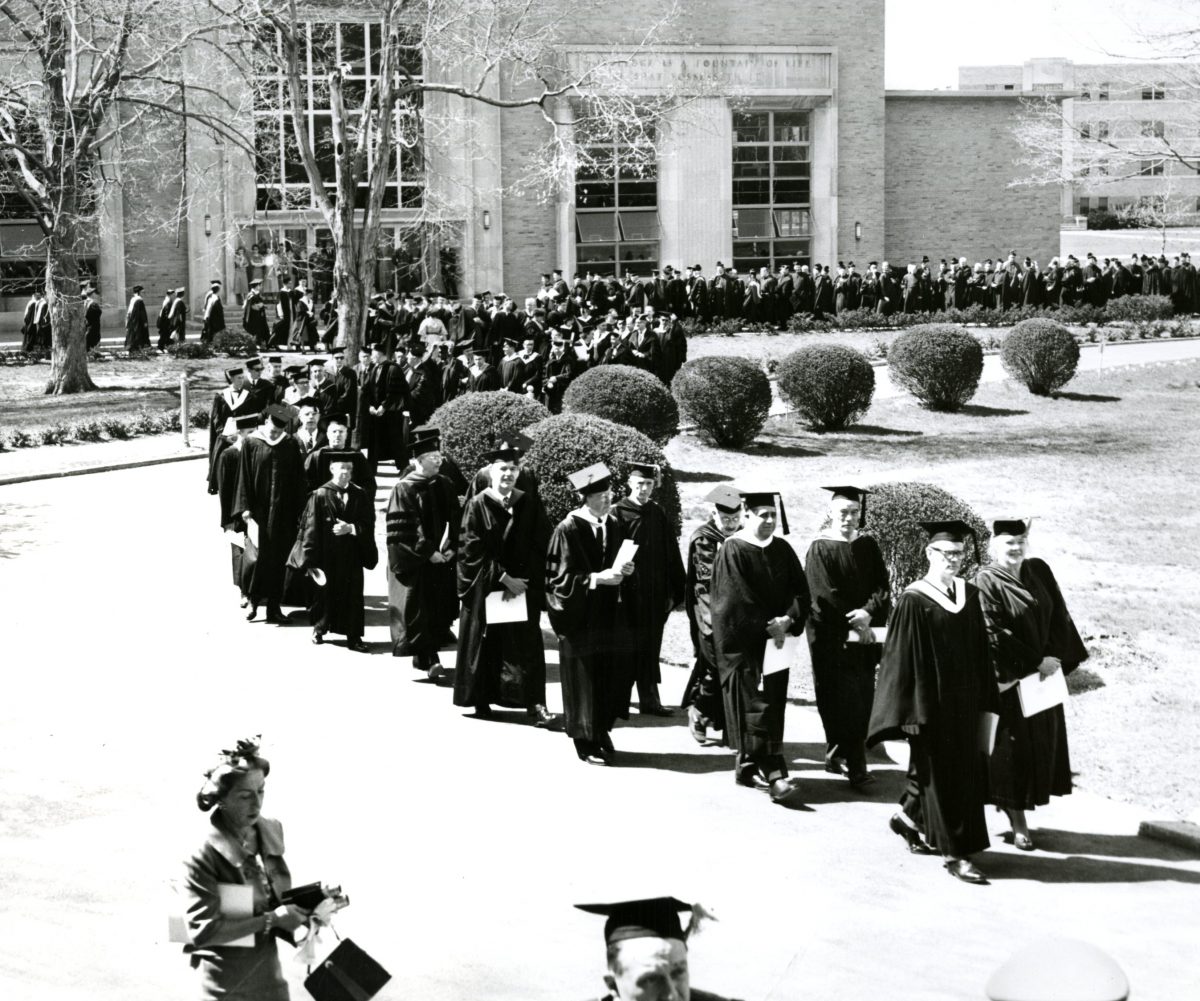 Graduation Day is a rite of passage for any senior who has fulfilled all coursework requirements necessary to earn a diploma, but this milestone is further seen as both recognition and reward for their dedication to educational achievement.  Traditionally, the annual commencement ceremony is one that is seen as a high point and celebratory event as a capstone for any academic year at Seton Hall.

There is a primary graduation exercise that typically takes place during the month of May, but the experience for each graduate is typically enhanced through related ceremonies sponsored by each individual School and College on campus.  The name of each graduate, their major and degree along with information about the rituals that are observed at each event.  These details are memorialized through the pages of commemorative program booklets are often complimented with invitation cards, event tickets, and other documentation that have made for valuable archival resources that outline these multiple observances for future generations to reference.

Between the founding date of Setonia in 1856 to the present day, the planning and pageantry of all commencement exercises has a noteworthy history.  Official ceremonies were held during the first few years that the campus was located in Madison through its move to South Orange.  However, it was not until 1862 when the first graduate Mr. Louis Firth started a trend for thousands of other future alumni who would ultimately earn a diploma from Seton Hall.  Printed programs of that era outlined the ceremonial aspects of each annual observance and these records show that musical and dramatic programming was a traditional feature along with the parade of those donning the gown, hood, and mortar boards which further enhanced the occasion for attendees through most of the nineteenth and early twentieth centuries.

When it came to the choice of commencement venues over the years, the first ceremonies often took place off-campus at local Music Halls in and around nearby Newark.  With the construction of Walsh Gymnasium (re-christened the Regan Recreation Center) by 1939 this central campus locale became the new home to ceremonies over the next several years for the few hundred students (on average) who earned their Latin-inscribed diplomas each year.  Degree parchments would change over time, but most contain variations on the following wording . . .

(English Translation): THE REGENTS OF SETON HALL UNIVERSITY – TO ALL WHO READ THIS DOCUMENT – GREETINGS IN THE LORD – We testify that, with the power given to us by the supreme authority of the State of New Jersey, we have promoted to the degree of <insert> with all the honors, rights and privileges appertaining to this degree.  Wherefore, so that its authenticity may be greater and the attestation the fuller, we have undertaken to reinforce this document with our common seal and our hand.”

The number of degrees minted for each class would change with the large influx of students that enrolled at Seton Hall who took advantage of the GI Bill of Rights and tuition support after World War II. This resulted in a several-fold increase in the number of graduates that would increase in number from the late 1940s to the present day.

From the 1940s-50s and the succeeding decades, commencement-centered events were held on campus.  The ceremonies were usually held in the shadow of the “Atom Wall” (or other historical campus building depending upon the year and number of guests) which hosted the graduates, families, administrators, clergy, faculty, special guests, and friends who set upon the University Green.  During the mid-twentieth century with an increased number of graduates to account for and honor, multiple ceremonies were often scheduled usually a morning and afternoon session on the same day for example.  This helped with logistics such as parking and making sure that ample space on campus was available for all in attendance on particular graduation day.

Counted among the most memorable and highly publicized of individual commencement exercises came in 1983 when U.S. President Ronald Regan received an honorary degree along with artist Ms. Pearl Bailey and television executive Mr. Gary Nardino which resulted in a memorable event in Seton Hall History.

The popularity of Seton Hall commencements throughout the early-mid 1980s led to the search for a larger venue by the end of this decade.  This led the administration to book an off-campus venue which resulted in a long-term relationship with the Brendan Byrne-Meadowlands Arena (now known as the IZOD Center) in East Rutherford.  This lasted until the 2010s when the Prudential Center in Newark became the primary choice and central place for graduation exercises to this day.  Due to restrictions brought on by the Global Pandemic, the 2020 ceremony was cancelled, but has returned this year as a hybrid and multi-session event with both live and video elements alike.

Regardless of the year, the commemorative program booklets produced for each graduation ceremony show their own distinctive artwork, content, and uniqueness for those representing Seton Hall by a particular academic year.  Within the Monsignor William Noe’ Field Archives & Special Collections Center, the University Archives proper contain copies of many annual Commencement Programs dating back to the nineteenth century.  Within the pages of these guides, the names of each graduate and degree they received along with the commencement committee, marshals, order of events and individuals involved with the event including professors.  In addition, honorary degree recipients have been recorded over the years and usually give the keynote speech along with the valedictorian(s) who represent the student body.  Overall this is a day for the graduate and their families and the printed materials generated in their honor is an important part of our collection. 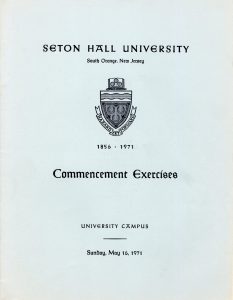 In addition to programs, various literature including invitation cards, press clippings, photographs, diplomas, and other materials of note that have memorialized one of the most special days within any academic year.  From the earliest graduation paraphernalia to the inclusion of present-day resources (including multiple ceremonies due to COVID-19 precautions) through the most recent editions during May of 2021 have been documented in various ways.  For example, the following links below provide additional specific information and context in regard to various graduation events in different forms and formats including catalog links and video presentations alike . . .

For more information on Graduation Ceremonies, Seton Hall History, and related subjects please feel free to reach out to us.  We can be contacted via e-mail at: Archives@shu.edu or by phone at: (973) 275-2378.  Thank you in advance and congratulations to all members of the Class of 2021!