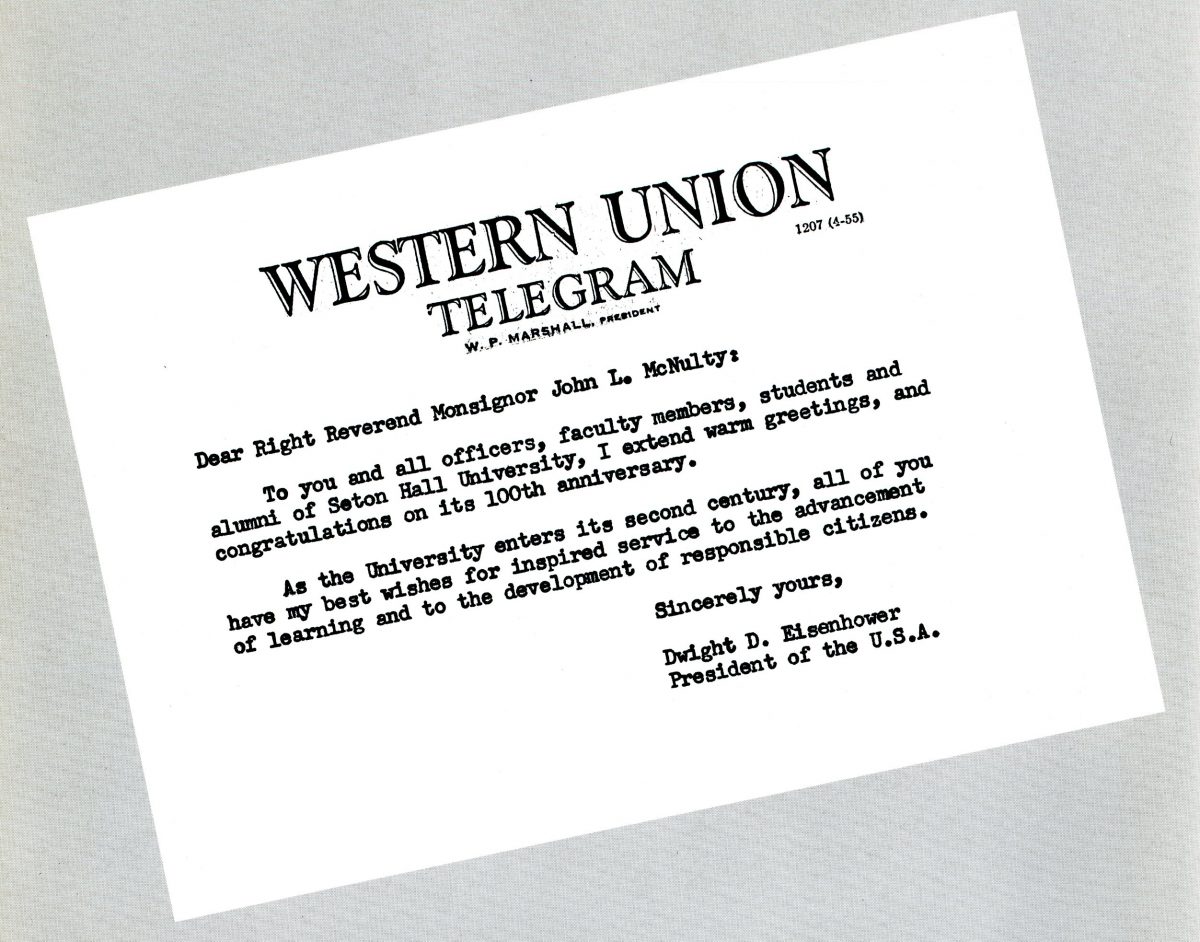 During the Centennial Year of Seton Hall University in 1956, this milestone date in school history led to the planning of a number of public programs that commemorated not only the evolution of the academic-based legacy of Setonia found in the classroom, but also the contributions of her students, faculty, and alumni to American society at large.  The presentations and specially-themed events scheduled throughout the 1956 Academic Year not only touched upon the ties Seton Hall nurtured in relation to religious life and educational enlightenment, but also linked to industry, commerce, medical support, science, publishing, and a number of other disciplines that touched upon community support.  Additionally, the most visible area of community public service in which Setonia had a long history of connections was that of political science and governmental affairs. 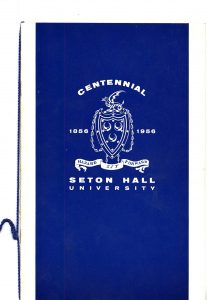 Event program cover from the Centennial of Seton Hall University (1956)Beyond having a long and productive relationship with a number of local and national politicians alike, the school and its cognizance of the United States Presidency is one that has been one that has been studied via courses campus-wide over the last several semesters and the campus has hosted various candidates for the highest office in the land over the last several decades.  When it comes to sitting Chief Executives and their appearances within the Seton Hall story, the most famous example was the visit of President Ronald Reagan at the Commencement Exercises held on the University Green in 1983.  However, another chapter that is notable was the invitation extended to President Dwight David Eisenhower by University President Monsignor John McNulty to be a part of the Centennial Convocation in 1956. 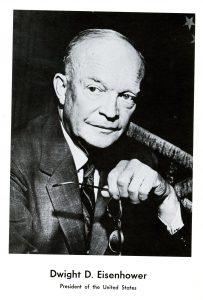 The invitation to “Ike” was a logical idea since it was a major anniversary celebration for the institution, but the Deputy White House Chief of Staff and Appointments Secretary to President Eisenhower was noted lawyer, Mr. Bernard Shanley, a native of Newark who served in this capacity from 1955-57 and had established ties to Seton Hall and the Archdiocese.  Ike was also connected to the values of higher education as the former President of Columbia University (1948-53) along with his prestige as a war hero and leader of the country  all made for the hope that he would be a part of this anniversary pageant.  However, President Eisenhower would ultimately send his regrets via telegram that he could not attend ceremonies in South Orange that year. 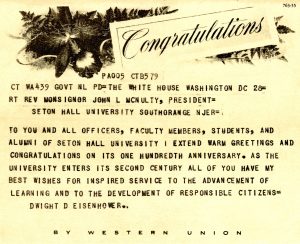 When retrospectively looking behind the reasons why Ike would not grace center stage at the podium, or the strains of “Hail to the Chief” were not heard, were various and understandable.  In conducting research through the diaries of Bernard Shanley held within the Monsignor William Noé Field Archives & Special Collections Center and various Seton Hall-centered resources a picture of the inner-workings of scheduling during late-February through early March emerges.  Ike was a popular president, but he was facing the unknown when it came to re-election and the Democratic primaries going on at that time which included candidates Estes Kefauver (TN), W. Averell Harriman (NY) and eventual nominee Adlai Stevenson (IL).  This took on greater significance as rumors as to the ill health of President Eisenhower were reported nationwide through the early months of 1956.  On February 29th, Ike made a public pronouncement that he would seek re-election that November.  Otherwise, during that first week of March, Ike was in conference regarding a letter written by FBI Chief J. Edgar Hoover on the topic of Civil Rights (3/1), preparation for a Summit Meeting with leaders from Canada and Mexico later that month with input from former President Herbert Hoover (3/3), a speech to the Fourth Annual Republican Women’s National Conference (3/6), taking time to send a birthday greeting to Pope Pius XII, and other duties along with sending the telegram of regrets to Monsignor McNulty and the Seton Hall community.

Although he did not physically visit our campus, this gesture of recognition by President Eisenhower was well-received by the Seton Hall community at the time and his place although directly fleeting in terms of personal contact with the school would be helpful through various initiatives such as the first White House Commission on Education (1955), various Higher Education initiatives (1950s-1960), and the Federal Aid Highway Act (1956) for commuters, among other imprints made by Ike and other Chief Executives over the years as we remember them on as part of this President’s Day observance.

For more information about our Manuscript Collections including the Bernard Shanley Papers, and other aspects of U.S. Political and Seton Hall University history we can be reached via e-mail at: Archives@shu.edu or by phone at: (973) 275-2378.