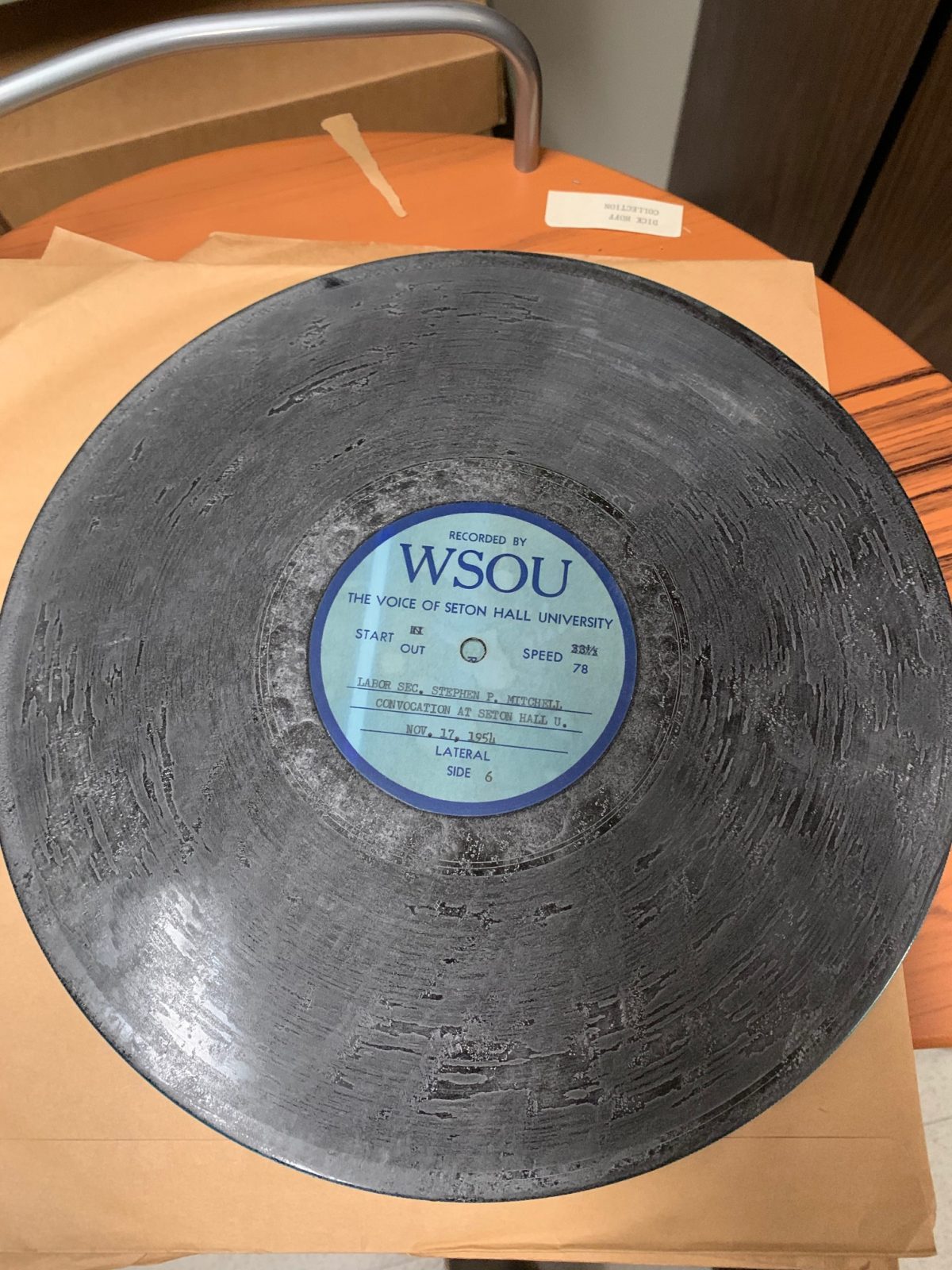 by Kyle Brinster, MS-MLIS candidate at

During the Winter-Spring 2020 semester I served as an intern at Seton Hall where I worked in the Archives and Special Collections Center under Walsh Library. They house a number of collection areas including institutional records, New Jersey history, Irish and Irish-American history, and additionally serve as the repository for records regarding the Archdiocese of Newark. But over the next few months my work was focused on SHU A, or the university’s audio-visual records.

One thing I have learned during my fledgling archival career is that the real world is very different from coursework. Although this may seem obvious the differences manifest in surprising ways. Often archivists are not part of an organization’s record keeping plan from the outset; they enter the scene well after one or several people have compiled records deemed important. In the past the same has been true of Seton Hall. Books and records were dutifully kept but without full consideration as to whether they fell under the archives’ purview. Similarly, the decision was made to separate out certain record types from their original collection. This is the case with SHU’s photograph collection, and before this semester was true of SHU A. When Technical Archivist Sheridan Sayles pointed out the 3 shelves full of boxes my first day in late January, I thought perhaps I was in over my head. There were boxes full of VHS and cassette tapes, many of which were blank or confusingly labeled. On the shelves beside the boxes were rows of record albums. These came in their commercial boxes and homemade sleeves, with a books of multi-disc albums rounding out the row of records.

I took part in several different AV projects during my semester at SHU. Initially, I consolidated and organized the array of VHS tapes. This consisted of surveying what was in the collection, weeding out commonly produced or off-focus tapes, and rehoming objects with their original existent collection. Separating taped episodes of The Sopranos from the collection was easy, but categorizing the wide range of news clips, Seton Hall TV spots, filmed lectures, and other miscellaneous tapes was something of a challenge. Many were also lacking much or any descriptive information, so they were viewed in order to try and find context so they could be better sorted.

I then set to work capturing the existing collections where the tapes belonged. These areas included the Athletics, College of Business, Poetry in the Round, and WSOU, just to name a few. I created spreadsheets outlining the new additions to the collections, including metadata information like the title, date, and format for easier search and organization in the future.

The process was then repeated with record albums: they were surveyed, weeded, rehoused, and reassigned to their original collections. In this way over the course of a few weeks we transformed SHU A from over a dozen linear feet of shelving into 3 neat boxes.