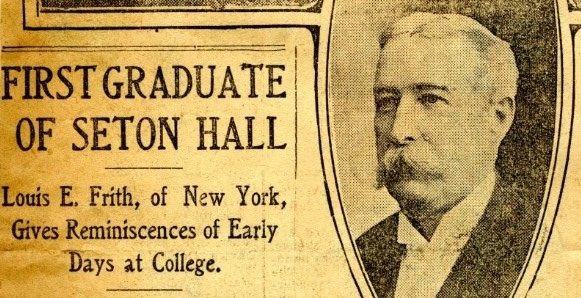 We are currently poised to celebrate the latest Seton Hall commencement in creative ways during this time of COVID-19, but even without a formal communal ceremony we are proud to honor the graduates of the Class of 2020 nonetheless.  We offer them congratulations, but also pause to remember several thousand others who received degrees from Seton Hall over the last few centuries.  In looking back at the history of school commencement exercises and alumni rolls, a common question often arises.  Have you ever wondered who was the first individual to receive a diploma from the Seton Hall?  The answer takes us back to 1862 when a young man by the name of Louis Firth earned a Bachelor of Arts degree and became the first to set a trend that lasts to the present day.

When Louis Firth crossed the Hudson River to New Jersey from his New York City home to attend Seton Hall College as a freshman in 1857 he knew that a seven-year academic journey (Prep and College divisions were combined at this time) that a unique intellectual awakening awaited him.  What he experienced followed a set of prescribed and orderly goals that he and his fellow Setonians took to heart: “The object of the Institution is to 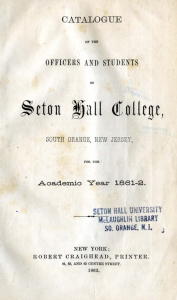 impart a good education in the highest sense of the word – to train the moral, intellectual, and physical being.  The health, manners, and morals of the pupils, are an object of constant attention.  The system of government is mild and paternal, yet firm in enforcing the observance of established discipline.  No pupil will be received from another College without unexceptional testimonials, and none will be retained, whose manners and morals are not satisfactory.”

After graduation, Firth moved back to New York City and lived most of his life at West 37th Street in Manhattan as one of a growing number of alumni who remained in the metropolitan area. In an interview conducted during the early 20th century, Firth opened up to the local press about his days at Seton Hall and some of the memorable figures he encountered during his halcyon days on campus.

Early in the article the reporter noted that: “Mr. Firth who is hale and hearty and as active as a man twenty years his junior, paid a tribute to the work of the first president (Father Bernard McQuaid) when the college was at Madison, where he first saw him in 1857, and at South Orange when the college was established there.”  Of Reverend McQuaid, Firth marveled at his “vigor” and went on to recount that: “. . . this remarkable man had a wonderful influence over the boys at college . . . the holy and learned men with which he surrounded himself and taught us imparted the qualities which fit a man to live.  Character was formed at Seton Hall, because of the environment.”

When it came to recollecting his graduation day, Firth colorfully illustrated the scene and his creativity in marking this historical day . . .

“The first commencement exercises were held on an improvised stage built under the trees just east of the present college buildings.  There were but a small number present, as South Orange was but a hamlet, and there were no cars to Newark.  Through a prank played by the boys a few nights before commencement day, I came very near not being the first graduate of the college.  It happened in this way: The college bell rang every morning at 4 o’clock, and the farmers for miles around roe by it.  One night we planned to ring it at 2 o’ clock instead, and after setting the college clock two hours fast, I was selected to pull the rope.  I did it, and hustled back to bed.  The college prefect, whose duty it was to ring the bell, appeared just then, looked at the clock and went about his early morning work, wondering all the while how the bell rung.  The farmers were awakened and started in to do a day’s work.  Needless to say, when the sun did not rise at the appointed time, watches were compared, and the faculty decided that a prank had been played.”   Needless to say that despite the “time change” Firth managed to make it to the ceremony and receive his honor due.  A full overview of the ceremony can be viewed below . . . 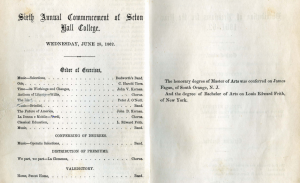 For more information on the 1862 academic year  and other early 19th century details featuring studies at Seton Hall please consult our Undergraduate Catalog(ue) links found via the Archives & Special Collections – eRepository site at – https://scholarship.shu.edu/archives/    We are also available to assist with information on commencement ceremonies along with other research questions concerning Seton Hall and we can be reached via e-mail at:  Archives@shu.edu