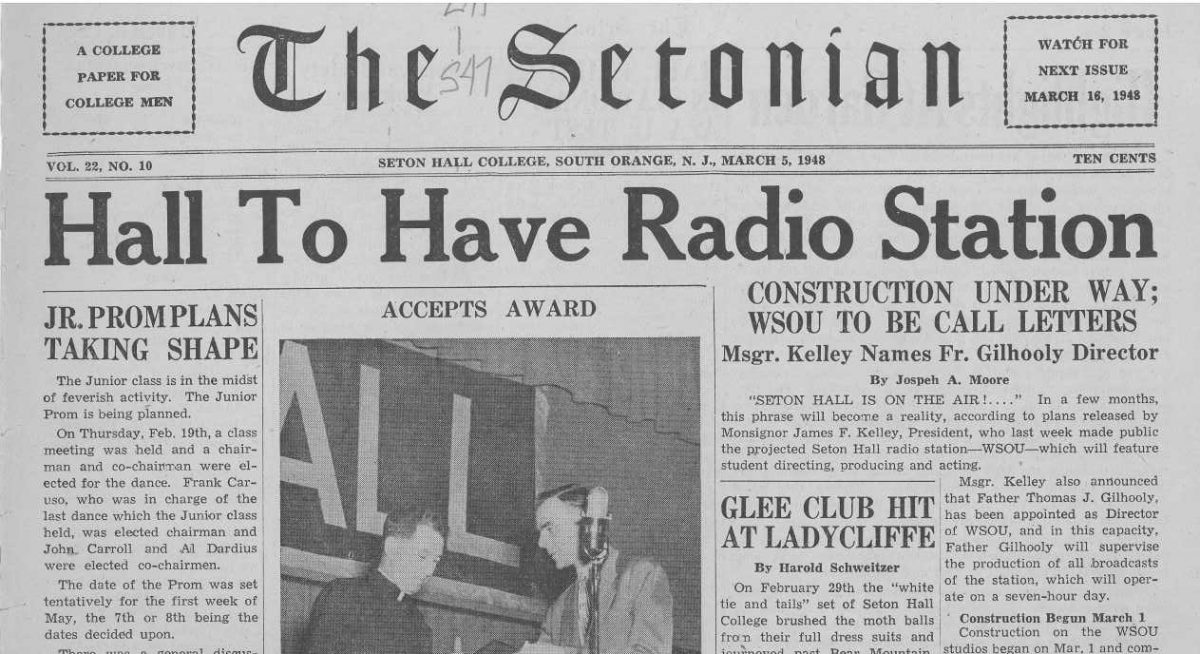 Anyone writing about Seton Hall student organizations history can access significant material in the Archives & Special Collections Center.  This is especially true with regard to the founding and first airing of radio station WSOU-FM, the first College operated FM station in New Jersey.  On April 14, WSOU celebrated its 72nd Anniversary.

Among the archival items which provided the background and ensuing explanation of the WSOU founding were the Memoirs of Msgr. James F. Kelley ’24, the President of Seton Hall College.  The Memoirs have a section devoted to WSOU as a student run activity and can be coupled with important description of the events which took place from the inception and thought to the actual on-air event on April 14th, 1948.

As a new of enterprise, Seton Hall needed approval of the Board of Trustees and the then Archbishop of Newark, Thomas J.  Walsh for whom the Walsh gymnasium is named and the home of WSOU for its 72 year history. Msgr. Kelley described an exchange with U.S. President Harry Truman and his daughter Margaret, at which time a possible allocation of a station might be accomplished.  He merely had to educate and persuade the Board of Trustees.  In addition, the actual cost of the building of the station would be a significant amount of money, Msgr. Kelley finessed this by persuading several donors to finance the acquisition of the needed equipment, and through his many contacts, he even acquired a radio tower, which still stands today at the rear of the Walsh Gymnasium and Regan Athletic Center complex.

Construction of the Seton Hall radio station actually began in January 1948, as reported in the Setonian, under the tutelage of Fr. (later Msgr.) Thomas J. Gillhooly ‘33 whom he had appointed the Director, in the previous December with a mission of actually getting station built.  Fr. Gillhooly organized the original staff of the station and with the help of several students, notably Thomas N. Parnham ‘50, who would remain the Chief Engineer until his death in 1994 and Victor J. Kemper ’50, later to become a noted cinema-photographer in Hollywood, the actual physical installation of the WSOU was accomplished in time to go on air as needed on April 14, even if the radio tower was not yet erected and a lower power output had to be used.

The big day arrived on a Wednesday, and at 8:00 PM the first words were spoken by Fr. Gillhooly to start the event, with the Archbishop in attendance along with the Master of Ceremonies for the evening, Ted Husing, a noted sports announcer of the time, and for whom the Press box in Walsh Gymnasium was subsequently dedicated.  Soon afterward the initial launch,  the “Voice of Seton Hall” would be on the air seven days a week, providing a variety of programs, including live performances, recorded music, the first nationality oriented programs and eventually remote broadcast of events such as Baseball and Basketball as well as community topics of interest in the New York Metropolitan area.

Additional information about the history of WSOU-FM radio are welcome along with questions about existing resources can be found by contacting us via e-mail site at:  Archives@shu.edu