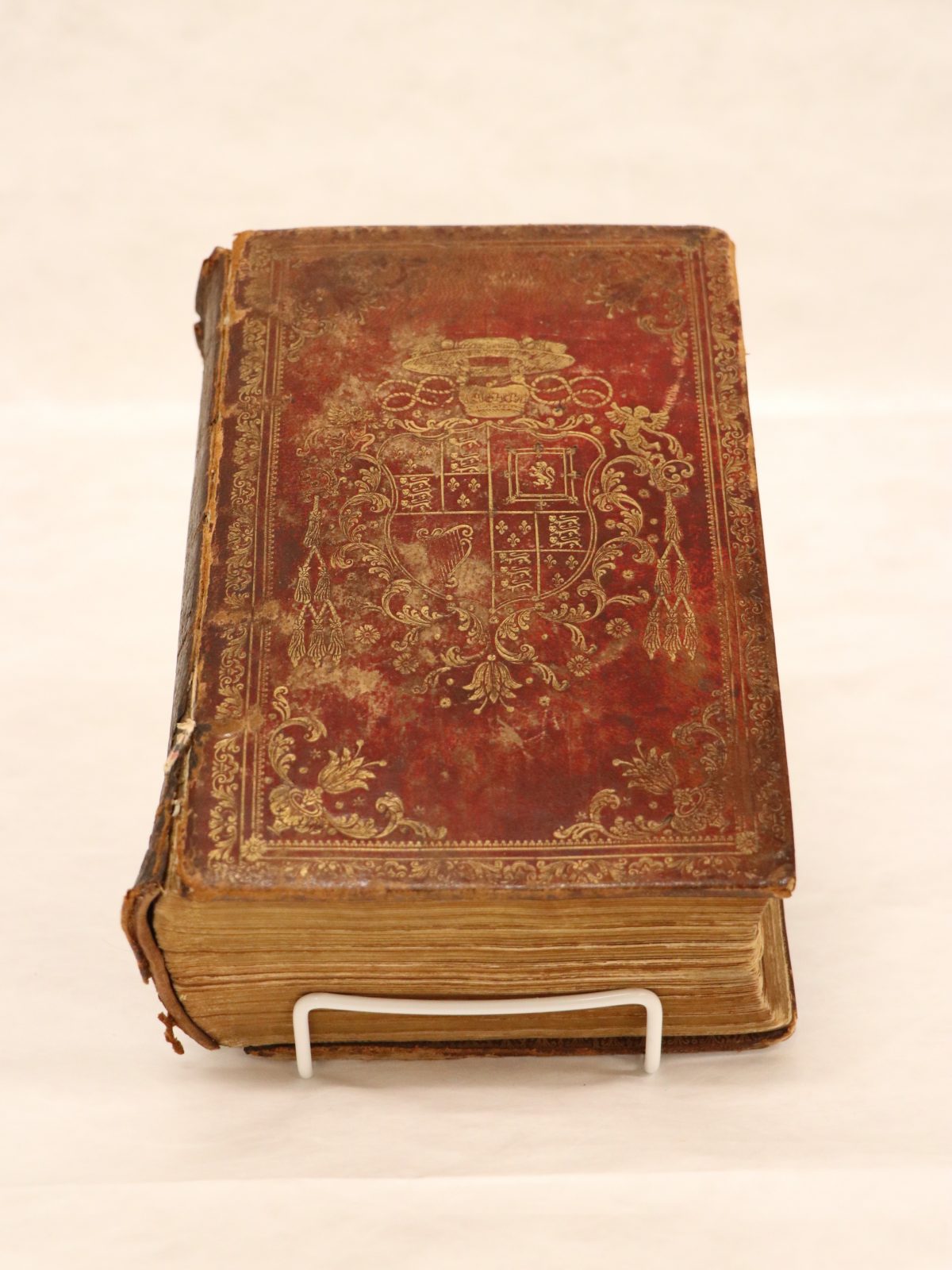 The Roman Breviary (Latin: Breviarium Romanum) is the book containing the public or canonical prayers, hymns, psalms, and readings for everyday use, especially by bishops, priests, and deacons of the Catholic Church. Currently, it is known as the Divine Office or The Liturgy of the Hours.

After the Council of Trent (1545-1563), the popes tried to impose a single standard version of the Breviary throughout the Church. They had some success, but many dioceses and religious orders retained their local customs.

Seton Hall’s Breviary is an unusual one. As its title indicates Breviarium Romanum ad usum Cleri Basilicae Vaticanae, it is the Breviary for the Basilica of Saint Peter, the Vatican Basilica. Many cathedral churches and great basilicas especially in Europe, have a “Chapter of Canons.” This group of priests have the responsibility to daily pray the Divine Office. This Breviary contains the ritual they would use, including prayers and hymns unique to the Basilica.

As indicated by the inscription “Joan. Nolin sculp.” at the base of the column on the left of the title page, the title page was engraved by Jean-Baptiste Nolin (c. 1657–1708), who was a French cartographer and engraver. The page pictures Saint Peter’s Basilica and Square, framed by large statues of Saints Peter (left) and Saint Paul (right). Above in the center is the coat of arms of Pope Clement X (1670-1676).

Among his many offices, Cardinal Stuart was Archpriest of Saint Peter’s Basilica from 1751 to 1807. This post included the responsibility to pray with the canons on specific occasions. Its well-worn condition attests to the Cardinal’s fidelity to these responsibilities.

As noted on the second title page, our Breviary was printed in Paris by Sebastian Mabre-Cramoisy (1637? -1687), Printer to the King, in 1674. In the introduction, the editor notes that it contains certain prayers and scripture readings that are particular to the clergy of Saint Peter’s Basilica. And that the last printing was more than eighty years before and few copies remain. Therefore, it is surprising that Cardinal Stuart would be using a book that is more than a century old since there is record of a 1740 printing. Of course, this version was printed by the renowned Mabre-Cramoisy and the cardinal had it rebound in magnificent red leather and adorned with his coat of arms.

At the bottom of the page, in very small cursive script is the following:

This short note by Father Bayley, later Bishop Bayley, the founder of Seton Hall University, gives an insight into the manner in which fledgling colleges in the United States would stock their libraries. In later letters and diary entries after he became bishop of Newark, Bayley refers to purchasing large lots of books in Europe, often from shuttered colleges, convents, and monasteries. These volumes formed the core of the libraries of new American colleges. There are numerous examples of centuries-old books with the stamp Collegium Setoniense in the Walsh Library collections.

See the Stuart Breviary itself and learn more about the Cardinal Duke of York who owned it at the exhibit in the Monsignor William Noe Field Special Collections Center on the first floor of Walsh Library, through March 31. 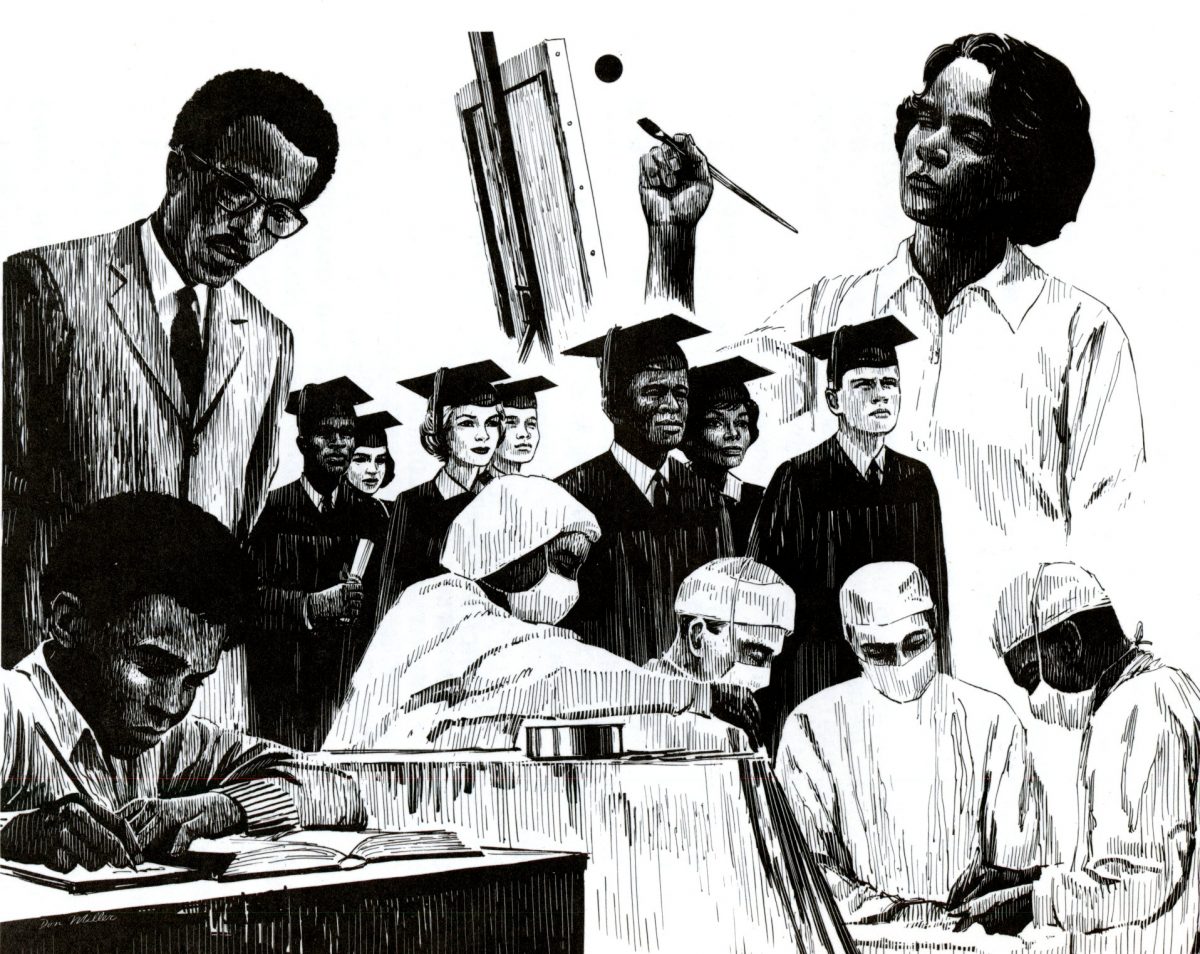 The legacy and importance of formal African American Studies curricular development on campus goes back five decades.  Originally known as the Center for Black Studies, its founding date of August 1, 1970 heralded the start of a unique and valuable learning opportunity for the Seton Hall University academic community which continues to this day.

From its adoption, the early vision of Dr. George Jackson who was appointed the first Director of Black Studies combined with strong administrative support from Msgr. Thomas Fahy, University President and Bishop John Dougherty, President Emeritus, the program had a successful launch and solid foundation from which to build further recognition.  The Center for Black Studies offered students the choice of a certificate, or degree-bearing option of study which included a Bachelor of Arts in Black Culture or Black Community Studies upon successful completion of coursework.  This program has continued to evolve over time and from the 1980s forward changed its operating title and is now focused on offering diplomas centered on both African American and Africana Studies in particular. 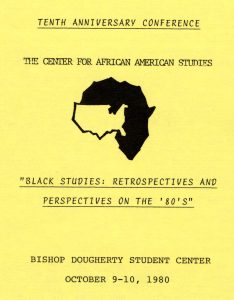 The ongoing mission of the Center for African American Studies has been well-documented throughout its history via the existence of various writings produced by the institute from its planning days during the late 1960s forward.  The following passage captures the philosophical approach created by the founders and developed upon over time: “The Black Studies Center seeks to encourage Black scholars to develop vital skills in the interest of the Black community . . . It also recognizes that part of its mission must be to operate in a manner which will promote humane application of contemporary knowledge and skills to the Black community and to society in general.  If scholarship is to be one of the tools by which total freedom is to be obtained then the Black scholar and those who guide his development must accept no compromise for excellence.”  This all tied into the prime objective of training individuals who would continue to promote research and create publications related to African American themes for present and future generations to explore in more depth.

The archival records that correspond to the Center for African American Studies contain materials documenting the operation of the institute from 1970 until the late 1980s.  Included within our holdings connected to this area are examples of budget data, office memoranda, course offering overviews, meeting minutes, newsletters, notices, and various operational files that show the inner-workings of the Center.  More details about this collection can be found by consulting the following finding aid:  https://archivesspace-library.shu.edu/repositories/2/resources/316

In addition to the Center for African American Studies proper, the Monsignor William Noé Field Archives & Special Collections Center holds a number of other resources related to the African American experience.  More details on specific collections and relevant holdings can be found via the following site:  https://library.shu.edu/collections-guide/african-american-studies 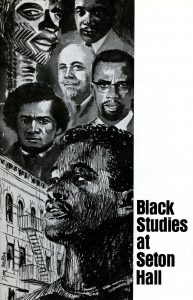 For more information on any aspect of African-American or University History you can contact us by phone: (973) 275-2378, or via e-mail at: <Alan.Delozier@shu.edu>