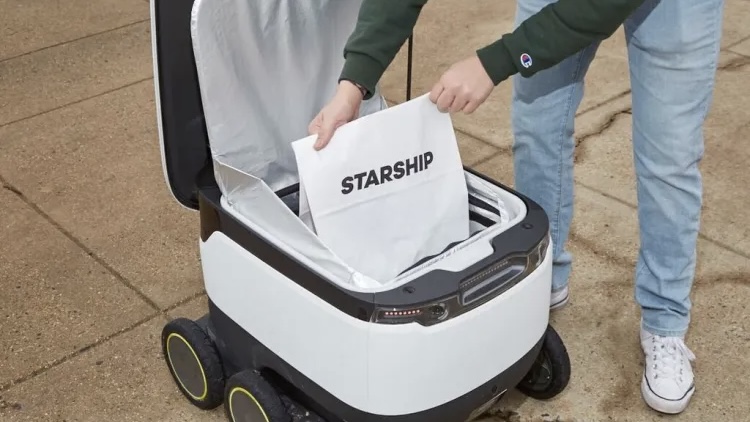 In the recent years of the exploding tech market, the movement of commodities has been the target of some of the most exciting advancements. From the revolutionary supply chain processes of Amazon to the killing of the taxi business by Uber and Lyft, the logistics of transportation has become a breeding ground for top-of-the-line innovation. The next target subsector of this industry is food delivery.

When one looks at state of the food delivery industry today it seems that businesses who rely solely on in-house hired delivery drivers are operating in the stone age. Almost every food spot has been forced to adopt some sort of third-party mobile delivering option. The efficiency of these decentralized, shared drivers via companies like Uber Eats, Slice, or GrubHub has been undeniable since their widespread implementation in the past decade or so. Needless to say, the concept of a third-party entity handling the delivery for a number of establishments has been proven.

But there are still some limitations to this process. Human drivers have always been prone to mistakes and liabilities. Whether this is a mistake while following directions, mishandling product, or simply being rude in their communications with the customer. That is why some think delivery via robots is the next step in the innovation of the food industry.

That’s where the Estonian company Starship Technologies comes in. Founded by two Skype co-founders, the company has developed a fleet of 1,700 fully autonomous robotic delivery scooters. Their goal is to automate food delivery. The tech startup has extensive operations throughout Europe delivering over 10,000 orders per day. Participating countries include the UK, Germany, Denmark, Finland, and the companies home country, Estonia.

Their smart, secure, and power efficient robots are all less than 100 pounds and cost just over $5,000. The units use a multitude of sensors and motion detectors to avoid traffic and pedestrians. They also include perpetual satellite locating and a consistent camera surveillance so the unit can be monitored and tracked at all times. They also include a safe-like magnetic lock for their temperature-controlled insides and emit a high-pitched screeching noise when a unit is taken off its planned path for any reason. This, paired with a sophisticated software infrastructure has allowed the company to ensure their customers of consistent deliveries. They boast that in their 8 years of operation, they have never had a unit lost or stolen, despite many attempts.

Since 2021, the company has been pushing to expand to the United States. However, the wider spread out, car centric, and more dangerous American cities might be harder to expand to at their current state. That’s why Starship has decided to sneak their way into the market with a slightly different American setting. They began pitching the idea to America’s controlled, cleaner and walker-friendly college campuses.

Currently, Starship is operating on 21 university campuses. Some of these are large state schools that have tens of thousands of students like Purdue, James Madison University, and University of Tennessee. But others are small, private institutions like Embry-Riddle Aeronautical University in Daytona Beach, Florida that educates only about 6,000 undergrads.

Despite the state-of-the-art technologies in each unit, the integration has not been completely seamless. There have been a few reports of the units malfunctioning or getting stuck in an unforeseen obstacle. In one instance early on in the implementation in Harrisonburg, Virginia, home of the Dukes of James Madison, a unit got stuck while crossing the industrial train tracks that run through JMU’s campus. According to Madeline Bochis, a junior studying nursing at JMU, “The tires just weren’t big enough to get over the large crack. Then, when the normal afternoon train went through that day the unit got crushed. There was video that got circulated of it and we all had a good laugh at the expense of [Starship]”. Since that incident, the robots have garnered a better reputation and are considered a legitimate option when ordering on-campus food. “The only person who probably won’t order from them again is the guy who got their lunch turned into a panini that day,” joked Bochis.

Despite these challenges, there are bright signs that the company will continue its sustained growth. If they can further perfect their delivery systems, they very well might be the first to automated delivery in thousands of cities across the globe in the years to come. Look out for Starship, and perhaps similar companies, to further revolutionize this red-hot industry.