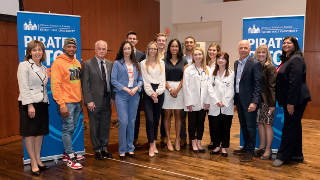 Students were awarded varying amounts of venture capital seed funding by the investor judges to reflect the entrepreneurial fund-raising process.

First Place: David Webster—Divvi, an idea for a cross-platform social messaging app to enhance coordination of groups and teams.

First Place: Ryan Skolnick for his business idea Aveho, a video game format for students in K-12 to learn Chinese and other foreign languages.

Second Place: The team of Mike Gavela, Brian Wreckler and Johnil Quezada for their business idea Cthroo, a discovery engine based on the ethical collection of personal data.

First Place (Tie): Mary Beliveau and David Kelly, seniors in the School of Diplomacy and International Relations, were recognized for their plan for Mazava Solar, a solar-powered mobile phone charger specifically designed for use in developing countries.  Stillman freshman Qingyu (Vito) Lu was selected for his plan to open a Video Game Console Café in his hometown in Nanjing, China.  Both teams will receive a monetary award of $4,750 and business services to assist in launching their companies.

Second Place: Taseen Peterson, a junior in the Stillman School of Business, won the second prize for TapFactory, LLC, an actual business he started with his brother and another associate, that creates and sells apps through the App Store, including StickyNotes, a reminder app that has over 4 million downloads.

Second Place:  Margaret Reilly, a senior in the Stillman School of Business who entered the contest solo, won the  second place award for Complementary Connections, an innovative marketing agency that fosters partnerships among products to raise brand recognition with consumers.

First Place: Luciana Contuzzi, a freshman in the Stillman School of Business who entered the contest solo, won the $3,500 first place award for The See-Stick, an inexpensive device that would allow hospitals to more efficiently evaluate and treat patient wounds.

Third Place: $100 “Honorable Mention” award went to the team of Allen Ratz, a senior in the Stillman School, and Caitlin Papa, a senior in the College of Education and Human Services, for A.C.E. Efforts, a proposal to create a hydroponic farm that would employ autistic young adults in partnership with the Alpine Learning Group, a private non-profit school for autistic students in Paramus, N.J.