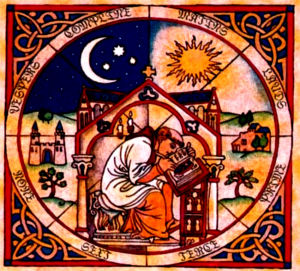 Seven times a day I praise you because your edicts are just (Psalm 119:164)

In the Biblical tradition the number seven symbolizes completeness. Each day sacrifice of a year-old lamb (plus flour, oil and wine) was offered in morning and late afternoon for the forgiveness of sins. Christians followed the Jewish practice of praying at the time of these sacrifices in the Jerusalem Temple. In Egypt and the Holy Land hermits and monks prayed the Psalms and Canticles throughout the day. In Italy St. Benedict (480?-550) organized those texts into a weekly cycle. This Divine Office, called Opus Dei (the work of God) was spread over the entire day, in seven “Hours” for the community to gather in worship. This begins in the very early morning (Matins), followed by Lauds (Praise), then Prime (6 a.m.) followed by the “Little Hours” (Terce, Sext and None) at 9 a.m., noon and 3 p.m. Vespers came in the late afternoon and Compline was the night prayer. The Gospel texts for Lauds (Luke 1:68-79 by Zechariah), Vespers (1:46-55 by Mary) and Compline (2:29-32 by Simeon) are the Lucan hymns, with the Canticle of the Angels (2:14 expanded) on Sunday and feast days.

After the Second Vatican Council, there came a major change in the Divine Office of the Roman Rite. The Psalms are recited on a four week cycle and people may choose one of the “Little Hours” rather than all three. This is an acknowledgement that the diocesan clergy need not be held to the ideals of the monastic community.

Christian piety began early to develop a deep sense of devotion to the suffering and death of Jesus (see Galatians 2:19-21; 6:14; 1 Peter 2:21-25). Thus, Friday was a day of fast and abstinence from meat (see Mark 2:20). Every Sunday was “the Lord’s Day (Dies Dominica),” celebrating Jesus’ resurrection on the first day of the week.

The hymns for the “Little Hours” commemorate the descent of the Holy Spirit at the third hour (9 a.m.; see Acts 2:15) and the time Jesus spent on the cross, when darkness covered the land from the sixth to the ninth hour (Mark 15:33 and parallels). Tradition-ally the special Liturgy on Good Friday begins at 3 p.m. In many places from noon to 3 p.m. the Seven Words of Jesus on the Cross are the subject of a communal meditation, with homilies and sacred music, the latter composed by renowned European musicians.

In addition to the Liturgy, Christians developed many practices to cultivate their devotion to the work of salvation accomplished by Jesus. Pilgrimage to the Holy Land began in the second century, with a focus on Bethlehem and Jerusalem. Repentance for sins led to forgiveness as God’s gift through the sacrifice of Jesus. The Way of the Cross and the Sorrowful Mysteries of the Rosary were prayers of the laity to meditate on the events of Jesus’ life.

The Benedictine Pope St. Gregory I (Pope from 590-604) is credited with prayers that link the Seven Hours of the Divine Office with the stages of the Passion (see below).  Note the last line of verse one: The reference to Jews should be limited to the Priestly leaders and those who followed them, not to all Jews then alive, nor to Jews of later times (Vatican Council II, Declaration on the Church’s Relation to Non-Christian Religions (Nostra aetate of October 28, 1965). Another prayer from the same manuscript addresses Jesus through the five wounds of the crucifixion. Thus, did Christian unite the passing hours of each day with the “Hour” of Jesus in the Paschal Mystery of his death-and-resurrection.