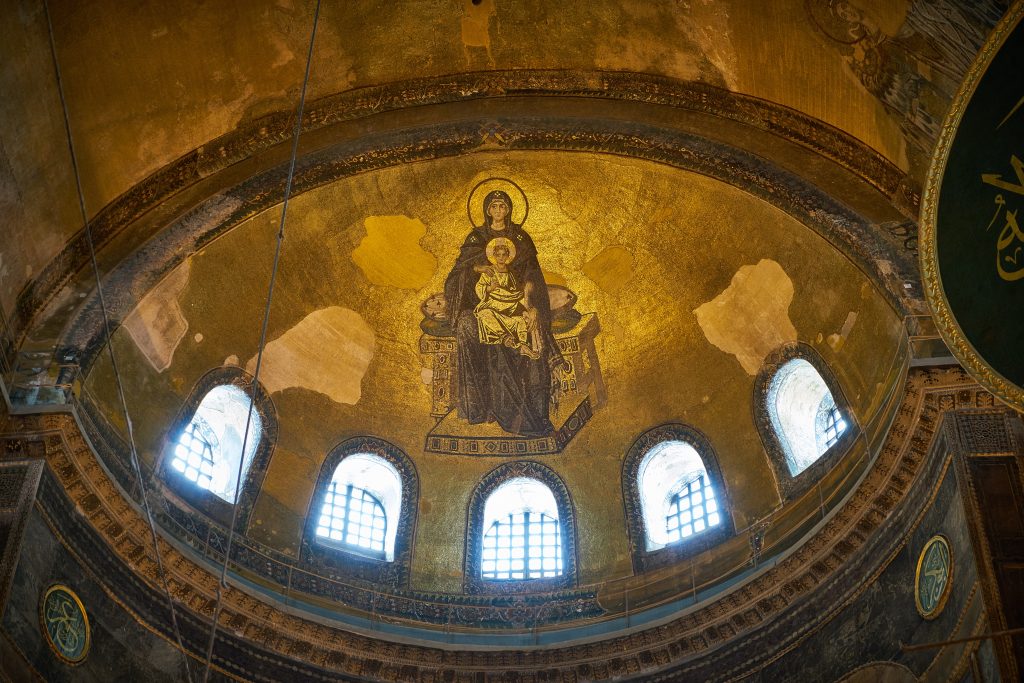 Mosaic of the Virgin and Child, which is located on the half dome of the apse in the Hagia Sophia.

The magnificent cathedral of Constantinople, completed during the reign of the Emperor Justinian I (483-565) and consecrated in 537 or 538, was dedicated to Jesus as “Holy Wisdom” (see 1 Corinthians 1:30; 2:6-9). The Muslim encroachment upon the Byzantine Empire culminated with the conquest of Constantinople in 1453. The church was recognized as an architectural wonder and became a mosque until 1934. We recall that the Ottoman Empire disintegrated after World War I and under Mustafa Kemal Atatürk’s leadership, Turkey became a secular state. The Cathedral became a museum and later UNESCO declared it to be a World Heritage site.

Although one might applaud the restoration of a place of worship to its purpose, the complications in this case are numerous! The Wall Street Journal of July 23, 2020 dedicated its weekly “Houses of Worship” column to this event, under the title “Turkey Retreats from Modernity.” On Friday, July 24th, the Journal’s report by David Gauthier-Villars includes the comments:

“Turning the site into a mosque again wouldn’t compromise its complex cultural and religious identity, Mr. Erdogan has said. Orthodox Christians are unconvinced, including those in Russia and Greece, who revere the site… ‘From our point of view, this decision violates the fragile interreligious and interconfessional balance that has been achieved in today’s world,’ said Metropolitan Hilarion, a spokesman for the Russian Orthodox Church.”

The New York Times of July 24th presented a report by Carlotta Gall, “Erdogan Fulfills Cherished Goal, Opening Hagia Sophia to Prayers.”  This follows the editorial, “The Hagia Sophia Was a Cathedral, a Mosque and a Museum. It’s Converting Again” on July 22nd.

One might think that the return of a building to its purpose as place of worship would be greeted positively in the modern context of interfaith dialogue. However, in this case, Christians in Turkey and the world at large recall the tragic attacks on their lives and well-being from the 1800s until the end of World War I. Atrocities committed against the Armenian and Greek Christians by the Ottomans have not been acknowledged in Turkey, even as the crime of a past regime. The tiny Christian minority there today deserves the support of their brothers and sisters in faith. This expresses a principle enunciated by St. Paul: “As we have the opportunity, let us do good to all people, and especially to those who are of the household of the faith” (Galatians 6:10). We hope that the present decade and beyond will become a time when minority Christian communities will experience a deep sense of peace in their homeland.

It was reported recently that the desecration of a Montreal-area synagogue was “one of the worst such incidents to take place in Canada in years.” Next to the direct attack on human beings, the destruction of what they hold sacred is reprehensible to the greatest degree!

At the biennial meeting in May 2001 of the Holy See’s Commission for Religious Relations with the Jews and The International Jewish Committee on Interreligious Consultations, the joint statement on sacred sites issued at that time should be circulated again.

Already in the 1950s, Montreal was the place were positive Catholic-Jewish relations were initiated by Sister Marie Noelle de Baillehache of the Sisters of Sion. In the spirit of collaboration and learning over the decades, we are assured that efforts to defend the synagogues of Montreal and other cities will be complemented by a renewed concern for the education of the younger generation.  May the blessings of peace be shared by all people of good will there and everywhere!

On April 15, 2019 all were dismayed to see flames soaring above the cathedral Notre Dame de Paris! This work of faith that began 850 years ago was threatened in a way that went beyond the depredations of past wars and the French “Enlightenment.” This was an accident, perhaps due to human negligence but not the result of malice or wickedness. We are grateful that no lives were lost and thank the firefighters for their brave efforts to save great parts of the building and its precious contents!

On Easter Sunday vicious attacks on Catholic churches and luxury hotels in Sri Lanka evoke another depth of sadness among decent people everywhere. The communities gathered to celebrate their faith were overwhelmed by the horrific destruction of human life by people willing to die along with their innocent victims. Again we listen for clear denunciation of such atrocities by leaders of the larger groups from which these crimes have come.

More recently in the United States, this time in Poway, southern California, we are shocked to learn of another invasion of a Jewish house of worship with murderous intent, this time by a youth who has absorbed anti-Jewish bigotry from his surroundings.

We offer sympathy to the survivors and families of those whose lives were cut short. May people of good will everywhere be alert to those in our midst who manifest that they harbor malice in their hearts. May the latter be touched by a person who persuades them to seek help in dealing with their unwholesome attitude and other needs.  In the pulpit and classroom may educators provide avenues to share the gift of peace!

We join the Bishops of the Unites States in praying for the victims of the attack on ChaBaD House in Poway. See the President of U.S. Bishops’ Statement on Synagogue Shooting in Poway, California and the statement by San Diego Catholic Bishop Robert W. McElroy.

As we recall other situations of persecution of Jews in the United States, the continuing attacks on Catholics in parts of Nigeria over the past decade should be in our prayers as well. See “Archbishop Says Christians Slaughtered ‘Like Chickens’ in Nigeria” by Thomas D. Williams, Ph.D.

Over the generations ethnic communities in New York City have shifted in location, so now the impressive K’hal Adath Jeshurun synagogue built in 1888, is in Manhattan’s Chinatown. It has been restored and began displaying its history yesterday in a permanent exhibition near the study hall and the sanctuary, which are still in use. See David W. Dunlap’s recent article, “In Chinatown, Remembering the Origins of a 126-Year-Old Synagogue,” in The New York Times for a wonderful, brief overview of the synagogue’s rich history. By Alexisrael (Own work) [CC-BY-SA-3.0], via Wikimedia Commons