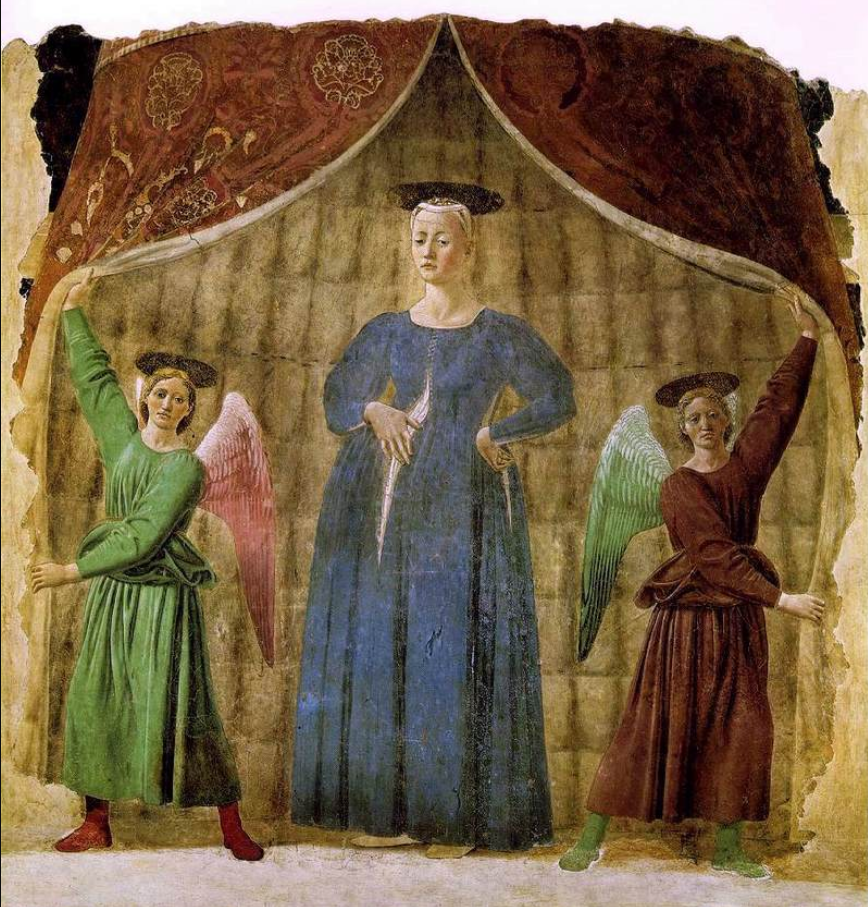 Piero della Francesca (about 1415 – 1492) produced a number of significant paintings on the life of Jesus. His fresco Madonna del Parto (the Virgin shortly before she gave birth) was located in a chapel at Monterchi near Arrezo in Tuscany but in 1992 was moved to the Musco della Madonna del Parto nearby. The scene posits two angels who open curtains to a tent reminiscent of the Tabernacle in ancient Israel, to reveal Mary pointing to her womb. In his WSJ article, “On the Brink of the Saviors Arrival,” Willard Spiegelman describes the scene: “The curtain is going up on a world changing performance.” The Museum’s website gives a description in English with photographs of the town and the painting: www.madonnadelparto.it/la-madonna-del-parto-uk-2/ .

The 450th anniversary of Pieter Bruegel’s death is commemorated in the Vienna Kunsthistorisches Museum’s extraordinary exhibit, through January 13, 2018. Pieter Bruegel the Elder (1525/30-1569) was a prolific painter of scenes from the biblical and classical Greek world, along with detailed and whimsical scenes of urban life in his own time. In his WSJ article, “‘Bruegel’ Review: Enduring Fascination,” A.J. Goldmann points to “the newly unveiled online portal www.insidebruegel.net, [where] you can inspect 11 of the Vienna paintings—as well as infrared and X-ray images—in exceptionally crisp detail.” The museum’s Picture Gallery offers a great selection of Bruegel’s works, including a number of altarpieces, under “Netherlands 15th – 16th centuries” in the “Selected masterpieces” section. 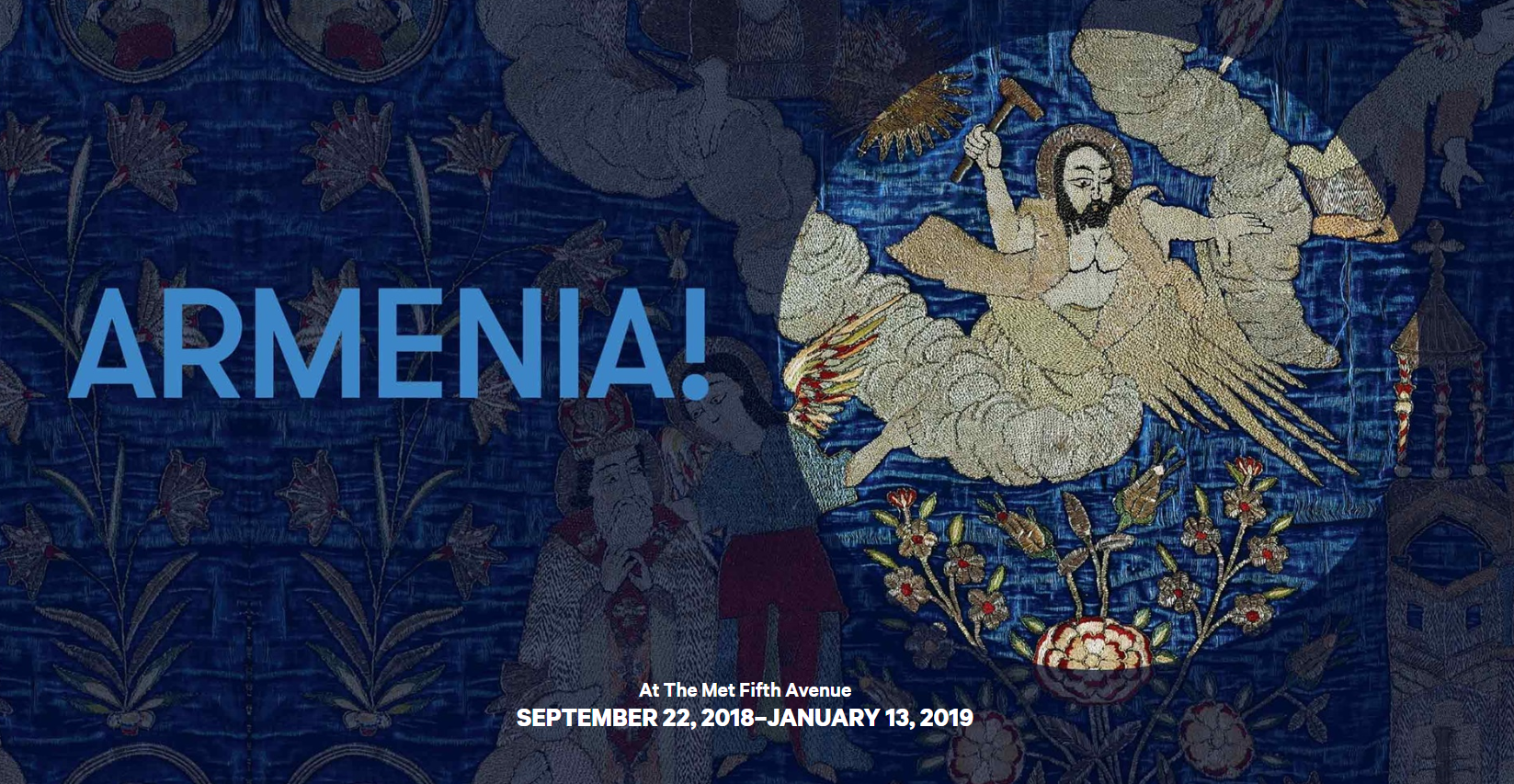 Armenia was the first nation to become Christian officially, when Armenia’s king was baptized by St. Gregory the Illuminator (240-332). Their territory covered the area later absorbed into Turkey, Russia and Iran, with Mt. Ararat as its spiritual high point. After the fall of the Soviet Union, Armenia north of Turkey became an independent nation.  Over the centuries the shadow of suffering has fallen heavily upon the Armenian people, culminating in genocide during War I.

In an essay, “Exploring the First Christian Nation,” in The Wall Street Journal, Edward Rothstein observed:

It is remarkable how deeply rooted our greatest art museums are in the religious realm. Artifacts reflecting profound faith- even those once used in the most sacred rituals- are at the foundation of these institutions. Removed from their origins in worship, these relics, illuminations, reliquaries and statues settled into an afterlife in our secular aesthetic temples, making it clear that for their creators (as for many viewers) the celebration of beauty is also a religious act.

The New York Times also has a report on this exhibit by Jason Farago with the title “Reverent Beauty: The Met’s Armenia Show Is One for the Ages.”

The exhibit at the Metropolitan Museum will continue until January 13, 2019.  See www.metmuseum.org/exhibitions/listings/2018/armenia. 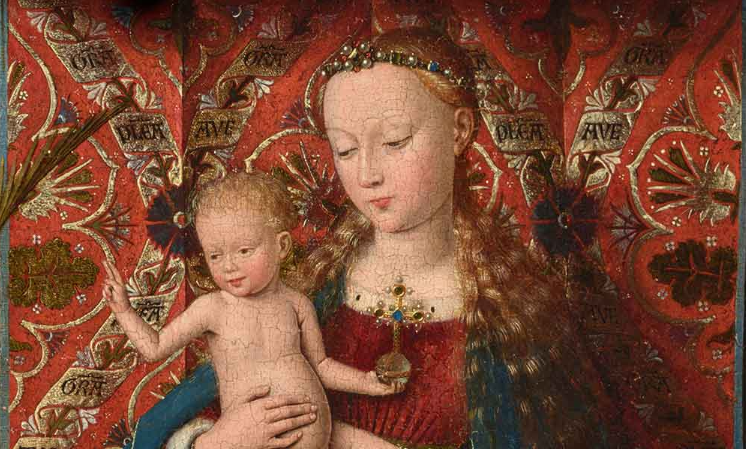 The Frick Collection in Manhattan has a small but exquisite exhibit, “The Charterhouse of Bruges,” until January 13, 2019. The focus is on two paintings of Mary and the Child Jesus with Saints Elizabeth and Barbara, one by Jan van Eyck (c 1390 – 1441) and the other by Petrus Christus (1410 – 1475).

The Frick website offers a short introductory lecture (five minutes) and a lecture of 58 minutes at www.frick.org/exhibitions/charterhouse_bruges.

Also of interest is the exhibit at the Morgan Library & Museum, which celebrates one of the first Mannerist painters, Jacopo Pontoromo (1494 – 1557), with a powerful Visitation of Mary to Elizabeth (Luke 1:39-56). This exhibit will end on January 6, 2019. Visit the Morgan website at www.themorgan.org/exhibitions/pontormo and read Cammy Brother’s WSJ article, “He Was More Than a Mannerist” to learn more about the exhibit and the artist. 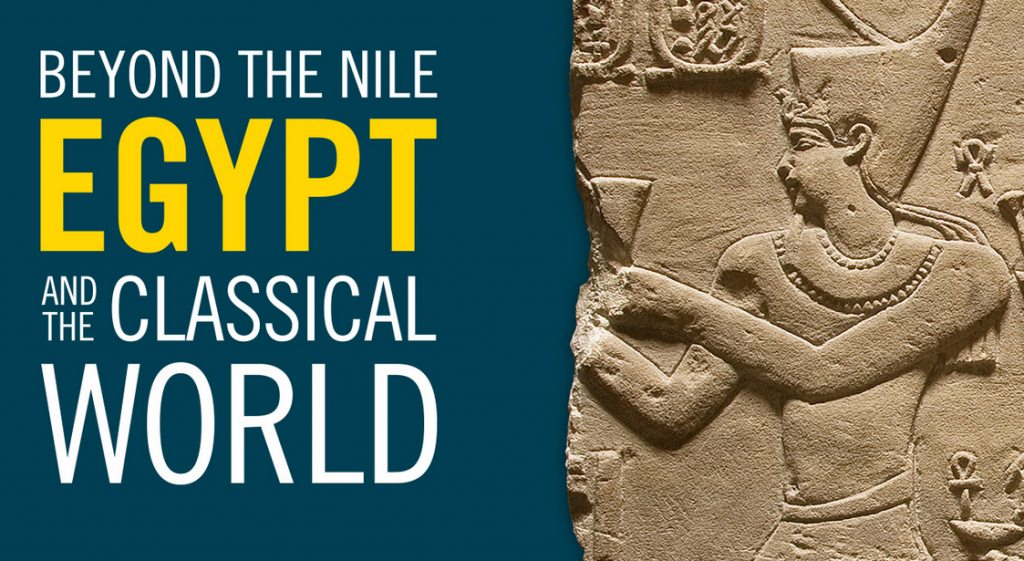 The J. Paul Getty Museum at the Getty Center in Los Angeles is hosting an exhibit, “Beyond the Nile: Egypt and the Classical World,” until September 9, 2018. To learn more, visit www.getty.edu/art/exhibitions/egypt/index.html.

Also, the St. Louis Art Museum offers an exhibit on “Sunken Cities: Egypt’s Lost Worlds” with centuries of artifacts from ancient Egypt, including numerous objects found on the sea floor near the Egyptian harbors of Alexandria and Aboukir Bay. See the Museum’s website for details: www.slam.org/exhibitions/sunkencities.php. The exhibit is described, including the words above, as “Treasures Beneath the Waves” in Edward Rothstein’s recent article in the WSJ, which you can read here.

Gian Lorenzo Bernini (1598-1680) was born in Naples, but Rome benefited the most from his long and rich career with the presentation of masterpieces in many forms of Baroque art and architecture.

The exhibit at Fairfield University Art Museum in Connecticut focuses on the Gesù, one of Rome’s many magnificent churches. The University’s website presents several examples of the art associated with this church and a brief video by Philippe de Montebello, formerly Director of the Metropolitan Museum of Art. To learn more and take a 360 virtual tour of the church of the Gesù, visit www.fairfield.edu/museum/gesu/. 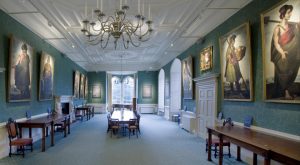 The Frick Museum in New York City has an exhibit of life-size portraits of “Jacob and His Twelve Sons: Paintings from Auckland Castle,” which features the work of Spanish painter Francisco de Zurbarán (1598-1664). This exhibit will end next month on April 22, 2018. You can learn more by visiting the Frick website at www.frick.org/exhibitions/zurbaran.

You may also be interested in reading the art review Jacob and His Twelve Sons’: Zurbaran’s Biblical All-Stars by Jason Farago in The New York Times. 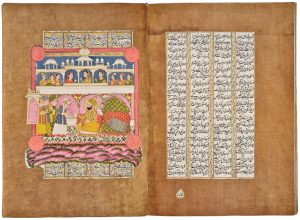 Edward Rothstein’s recent review, Make Alexander Great Again, tells of collaboration between the Institute for the Study of the Ancient World (15 East 84th St., New York, NY 10028) and the National Library of Israel to present “nearly 70 Persian, Arabic and Turkish manuscripts that outline the profound influence of Alexander and his culture on the Islamic world…”

Visit the Institute for the Study of the Ancient World’s website to learn more about the display of illuminated Islamic manuscripts. 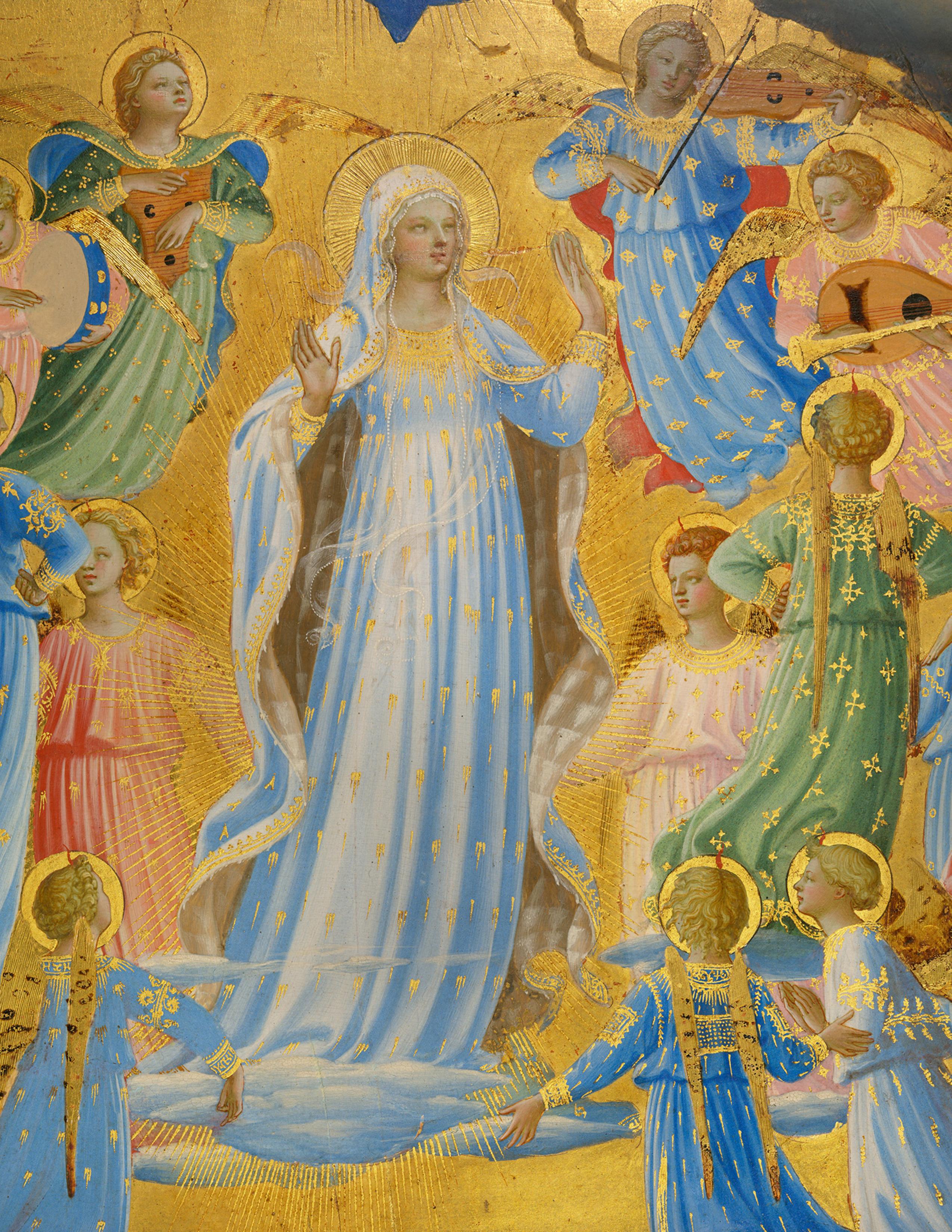 The Isabella Stewart Gardner Museum in Boston has an exhibit of 13 exquisite works of Fra Angelico (Giovanni da Fiesole, c. 1395-1455) described by Cammy Brothers, Ph.D., visiting professor at Harvard University, in this review in The Wall Street Journal.

The Museum’s website has photographs of the paintings and a video of the Fisherman’s Feast celebrated by the Italian Catholic Community in the Boston area in August each year. This contemporary celebration of the feast of Mary’s Assumption into heaven is linked by the Museum director to Fra Angelico’s magnificent two-tiered painting of the Dormintion of the Blessed Virgin.

Thanks to modern ingenuity these gems of the past can be enjoyed by anyone with access to the internet! 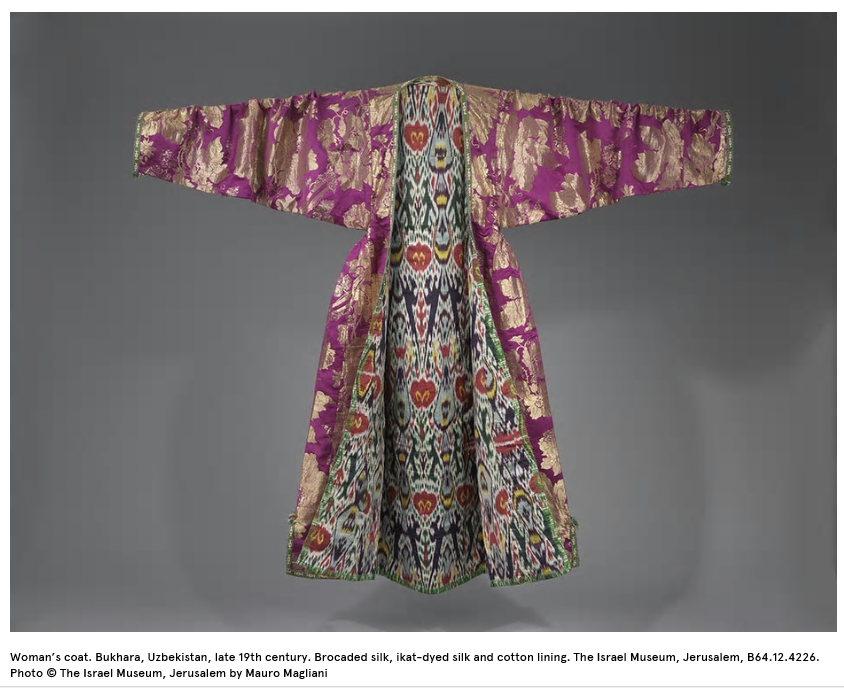 Throughout the ages, the way people dress has been linked to their faith and its practice. An exhibit, “Veiled Meanings: Fashion of Jewish Dress,” at the Jewish Museum in New York until March 18, 2018 received attention in The Jewish Week of November 24, 2017.  See jewishweek.timesofisrael.com/fashion-as-revealing-and-concealing/.

Beginning on May 10, 2018 the Metropolitan Museum (in New York City) will consider Catholic influences on fashion under the title “Heavenly Bodies: Fashion and the Catholic Imagination.”  See The New York Times of November 9, 2017 (p D1)  at www.nytimes.com/2017/11/08/style/met-museum-costume-institute-catholicism.html.