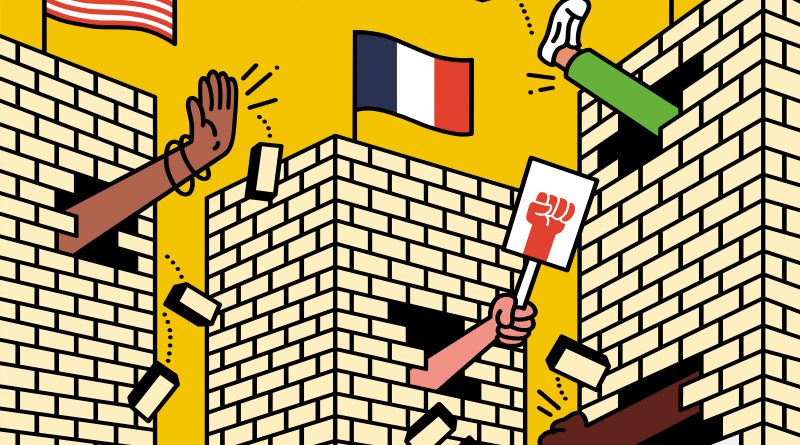 Behind the nativism, sexism, and incoherent twitter rants, the rise of Trumpism has brought a wave of populism that has reinforced a basic principle of the post-war neoliberal order: popular rule.  While the state as a unit has traditionally been the focus of international politics, the nation—the people(s) which states govern—is becoming increasingly salient.

This salience is largely due to the dramatic and significant effects that populist and reformist movements have had on the international landscape. In 2011, the Arab Spring toppled autocratic regimes in Tunisia, Egypt, Libya, and Yemen. Recent protests in Iran demonstrate that, despite the very real threat of death, the Iranian people refuse to allow the oppressive and brutal Iranian regime impunity. In Hong Kong, protesters continue to defy an equally pernicious Chinese police state.

The election of Donald Trump was also a demonstration of the popular will, giving voice to those who feel economically disadvantaged and left behind by a rapidly changing world.  In Europe and the U.S., the rapid acceleration of economic, cultural, and social interconnectedness has left large swaths of democratic constituencies economically disadvantaged. At the same time, a rapidly liberalizing social landscape has created conflict for many who espouse traditional or conservative social values. These economic and social crises have made the espousal of a separative and isolationist national identity attractive.

Nationalism is a term often used imprecisely. Trump, a self-declared “nationalist,” uses the word to essentially mean “America First;” in doing so he defines it in the negative—in opposition to a liberal order which he sees as putting the interests of the globe before that of the nation. Defining nationalism as the opposite of globalism is fundamentally flawed, since the two are not mutually exclusive.

While nationalism has historically implied placing one’s nation above others, this is an artifact of the us vs. them paradigm which has been gradually replaced by international integration and strategies of collective gains. Today, nationalism is more aptly defined as a sense of national consciousness—the nation as it exists in the minds of the populace. The nation, existing foremost as an idea, gives organization, voice, and meaning to a people; nationalism is the sense of their collective identity.

Kim Holmes emphasizes the distinctive nature of nationalism, arguing that there is no such thing as a universal nationalism (with overarching ideals or philosophy). Holmes writes that nationalism is a set of ideals or creed distinctive to a certain state and that true nationalism must reinforce the unique identity of a particular unit, rather than a pan-global identity. This is fundamentally where those who espouse values of international unification have failed. They believed that nationalism was inherently part of the us vs. them paradigm, that it was of the past. They therefore took little or no interest in constructing a nationalism of the future.

Consequently, this has left nationalism wide open for cooptation by those who espouse separateness, competition, and selfishness, and thus seek to resurrect the past. This retrogressive nationalism, however, is being recreated not only as nation vs. nation, but also as the nation vs. the so-called elitist and undemocratic forces of the “globalist liberal order.”

The division and separateness to which Trump has given voice, can be rectified by creating a new nationalism that integrates the values of cooperation and unity into the national persona—a new sense of the nation as a unique and important player in a community of nations.

Tomorrow’s nationalism must bridge to a future where the individual nation is seen as not only an inherent part of the whole, but an integral part of it. Instead of the “liberal elite” denouncing today’s so-called “populists” as ignorant, racist, and nativist, they should instead become populists and ‘new nationalists’ themselves.  Populists, of course, don’t just manipulate public opinion; they also shape it. This is true leadership, and it requires being sensitive to the moral disposition of conservative and liberal voters alike.

This type of moral empathy does not require compromise. It does, however, require humility. It requires being willing, to meet everyone at eye level without prejudice and with understanding. It also requires seeing the old nationalism, in all its divisive nature, not as evil, but as “the good that should have been left behind.”

This new nationalism must strengthen the sense of the nation in the minds and hearts of the people, but also integrate purpose and direction to that “individuality.”  This requires leaders to love their countries totally and unapologetically and to demonstrate a new national pride that elevates love of country above the hatred of someone else’s.

Without a new, truly liberal nationalism, Trump’s nationalism will outlast him, and it will bring a dystopian world order, one that glorifies division and lies about the future. It will be a world of greed and selfishness, dominated by private monopolists, corrupt government, and large disparities of wealth.

Today, economic disadvantage, caused simply by greed and the misuse of power, is the foremost cause of the division and hatred in communities around the world. Especially in America, unregulated capitalism and legalized bribery in Congress are rapidly transforming American democracy into a plutocracy.

The new nationalism establishes a right relationship between the particular and the universal, between the individual nation and the community of nations. It is free from selfishness and greed and will give birth to a true national unity—true because it is both unified within itself and unified with that which is outside itself.

This new nationalism would give form to the universal principle E Pluribus Unum which American liberal democracy has for more than two centuries stood as a shining symbol.  This principle sees no conflict between the exaltation of the individual and the greater good of the group.

This vision is closer than it may seem, but to get there we must cultivate a national individuality embedded within the whole.

Michael Galloway is the Executive Editor of the Journal of Diplomacy and an MA candidate in International Relations and Diplomacy at Seton Hall University.