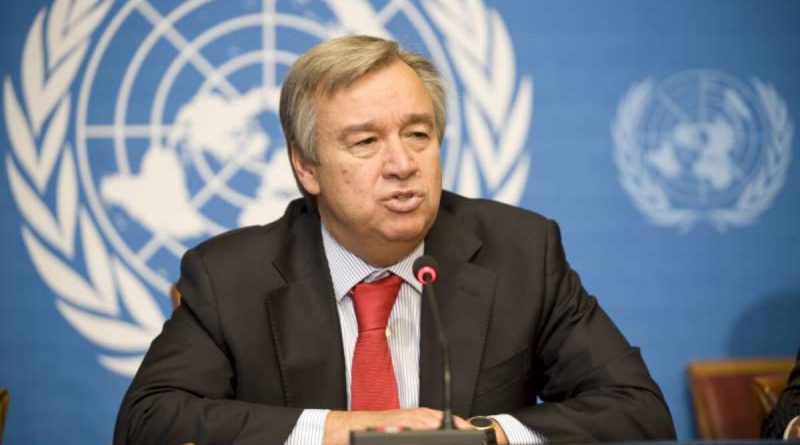 Last week at the United Nations, Secretary-General Antonio Guterres presented his priorities for 2019 before the General Assembly in an informal plenary meeting. I was interested in listening to his remarks because it was just a short four months ago that the General Assembly began its annual session in September with all of its pomp and circumstance and an agenda that rivals no other international organization trying to tackle some of the world’s biggest issues. Still, I was very interested in what he deemed a priority and to see how the Secretary General’s previous priorities shifted in the new year.

With full disclosure, I am and have always been an advocate of the work of the United Nations. I recognize its value just as many others do and acknowledge the situations that have indeed shown a negative light on the organization. However, Guterres’ presentation of his priorities for 2019 was enough to make me pause and actually research to determine how good he is at keeping up with his annual agendas. Afterall, if I am going to continue to support the efforts of the organization, I needed to ensure that he is a ‘doer of his words’ not just espousing the normal rhetoric that we can sometimes hear from political bodies.

One of Guterres’ priorities for 2019 is to foster multilateralism. In this highly polarized political environment, I believe that multilateralism is absolutely needed particularly since it is being threatened. Just like Secretary General Guterres, I think that multilaterism is needed to help hold together the fabric of humanity and that it is being tested in ways that we as global citizens could not have imagined.

The list of the Secretary-General’s 2018 priorities was helpful as I conducted a side-by-side comparison with his 2018 agenda. Before beginning his list of Priorities of 2019, Guterres mentioned the usual global challenges: obtaining and sustaining peace in the Middle East, denuclearization on the Korean peninsula, strengthening the relationship between the UN and the African Union, increasing counter-terrorism efforts, and last but not least, continued strengthening of UN peace operations.

I must admit, that in my fanaticism for the UN, I have watched my fair share of Secretary-General speeches. However, as I watched this particular live broadcast, I honestly heard and saw something different – almost an angst. He emphasized several times that we cannot be complacent and that we must accelerate our efforts. Out of the priorities that he mentioned, three resonated with me and caused me to acknowledge the sincerity and concern in his words. First, the Secretary-General stated that for the first time in the last three years, carbon dioxide (CO2) emissions increased and that the past five years have been the warmest on the planet in recorded history. Guterres stated that he is “stepping up climate action” and announced that he will host a climate summit in September 2019 to increase the momentum of addressing climate change in alignment with the 2030 Agenda of the Sustainable Development Goals (SDGs). He intentionally acknowledged and stressed that there are 102 members states that have opted to conduct Voluntary National Reviews (an SDG follow-up mechanism), with another 51 signing on this year in the effort to promote sustainability.

He also committed to take advantage of the advances of technology, while still preserving basic societal protections. He is ramping up this effort by increasing the engagement between the private sector and member states. He will pursue this end by having the UN serve as the platform for member states and the private sector to come together and foster better partnerships both internally and externally. He added that these particular efforts have to be ‘turbo-charged.’

Additionally, Secretary-General Guterres stated that he will push back on the dangerous tide of nationalism in Europe and revitalize mediation initiatives to include the Normandy format and the Organization for Security and Co-Operation in Europe (OSCE). On the top of his agenda again is revitalizing the effort to reverse the large-scale exodus of the Myanmar’s Rohingya Muslims with the full implementation of the Rakhine Advising Commission, which is vital for the well-being of both the Buddhist and Rohingya communities.

In 2018, the essential priority was ensuring diplomacy for peace with honorable mentions being the UN-brokered ceasefire in Yemen along with several peace agreements across Africa; the UN Global Compact on migration which is still helping to put an end to today’s atrocities; and that $15 billion reached over 100 million people in need humanitarian efforts around the globe. All in all, while identifying specific events and issues, the overarching theme of his priorities seem to remain the same. I find it reassuring that Secretary-General Guterres is cognizant that currently, when globalization is advancing at a rapid pace, he is in lock step with the many NGOs and civil society organizations in making the world a safer and better place and that his priorities are the also the priorities of the people. Ultimately, his priorities appear to reorient themselves to better protect the public against potentially detrimental international trends.