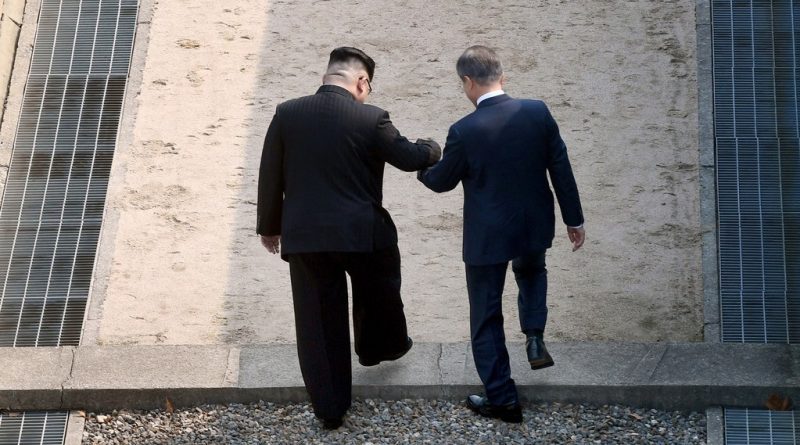 End to the Korean War?

On Friday, April 27th, North Korea’s Kim Jung Un and South Korea’s Moon Jae-in met in a historic summit at Panmunjom, a village in the heavily fortified Demilitarized Zone (DMZ). This meeting marked the first time a North Korean leader visited south of the demarcation line between the two Koreas. The recent developments between the Democratic People’s Republic of Korea and the Republic of Korea represent historic breakthroughs in the relationship between the two countries. In the wake of their summit meeting, North Korea’s Kim Jung-Un and South Korea’s President Moon Jae-in announced their ambitious goals of complete denuclearization and negotiating an official end to the Korean War (1950-1953) with the United States. This summit is the latest in a series of meetings between North and South Korea, however it is only the third time since the end of the Korean War that the leaders of the two countries have hosted direct talks. The summit was a theater-filled event that truly embraced public diplomacy, quite different from the usual private setting of such high-level summits. It involved smiles, handshakes, and embraces between the two Korean leaders, and there was even a joke about the South Korean president waking up early due to North Korean missile tests. Part of the summit was broad-casted live and the two leaders shared many memorable moments, such as each leader stepping in the other’s country as they embraced at the demarcation line, planting a tree together in the DMZ, and posing for pictures together.

One of the lofty goals announced following the inter-Korean Summit was ending the Korean War. The recent talks between Kim and Moon indicate that the Korean War (1950-1953) might finally officially end with a formal peace treaty. The Korean War technically ended in 1953 with the signing of an armistice agreement between the Democratic People’s Republic of Korea (North Korea) and the Republic of Korea (South Korea). The joint statement from the two Korean leaders stated that they would pursue a trilateral conference with the U.S., or a four-party one that included China as well, within a year in order to finally end the conflict, which has divided the Korean peninsula for over six decades. The other ambitious goal that the two Korean leaders announced was the complete denuclearization of the Korean peninsula. In unambiguous language, the two leaders stated, “South and North Korea confirmed the common goal of realizing, through complete denuclearization, a nuclear-free Korean Peninsula.”

Both leaders affirmed their commitment to peace, declaring that, “there will be no more war on the Korean peninsula and a new age of peace has begun.” Despite the bold goals outlined in the joint statement following the summit, there are still a lot of details to work out, as the two leaders did not provide clarification on specific commitments, pathways, or timelines for denuclearization and peace. It remains unclear if Pyongyang is truly committed to nuclear disarmament and thus some are skeptical of the sincerity of the North’s engagement and the possibility of actually achieving the lofty goals produced by the inter-Korean summit. Leading up to the proposed U.S.-DPRK summit scheduled for the end of May/start of June, President Trump seems to be encouraged by the results of the summit, tweeting on Friday, “KOREAN WAR TO END! The United States, and all of its GREAT people, should be very proud of what is now taking place in Korea!”

Important Opinions on the Inter-Korean Summit

In an article for Foreign Policy titled, “Pyongyang Is Playing Washington and Seoul,” Michael J. Green, senior vice president for Asia at the Center for Strategic and International Studies, argues that the summit served as an opportunity for North Korea to reiterate its status as a nuclear weapons state and to generate support for sanctions relief. While the summit was filled with public diplomacy and pageantry “aimed at South Koreans fearful of a U.S. attack on North Korea,” it lacked any meaningful commitment to denuclearization from North Korea.

Writing for Time magazine, Tom Plant, Director of Proliferation and Nuclear Policy at the Royal United Services Institute, contends that the “Panmunjom Declaration for Peace, Prosperity and Unification of the Korean Peninsula” provides a way forward for President Trump to make history. He proposes that President Trump and Kim Jong Un could negotiate the Korean Nuclear Initiatives, modeled on the U.S.-Soviet Presidential Nuclear Initiatives of the early 1990s, which would essentially encompass “a series of reciprocal, unilateral commitments to address the concerns of the other on a range of nuclear and broader security issues.”

In an email to the New York Times, David Albright, president of the Washington-based Institute for Science and International Security, expresses skepticism over the bold goals of the inter-Korean summit, asking “But how to achieve all the goals laid out in the document, given the current situation?” Albright contends that unless there is more specificity on North Korea’s nuclear disarmament, the other commitments in the agreement are “merely wishes.”

An article in The Economist discusses the prospects of a new NAFTA and what this new trade deal might look like under the influence of Robert Lighthizer, the president’s chosen trade negotiator. Lighthizer has signaled his willingness to withdraw from NAFTA and thus any trade agreement reached “would bear the scars of hard negotiations.”

The Washington Post’s Editorial Board argues that French President Emmanuel Macron and German Chancellor Angela Merkel have provided President Trump with a roadmap “for avoiding a string of potentially disastrous mistakes,” through their offers on transatlantic relations, trade and the Middle East. Their efforts to reach out to President Trump regarding Syria, the Iran nuclear deal, and tariffs shows that they both value and depend on their American alliance and that they want to save “the values-based international system which the U.S. helped to create.”

Writing in The New York Times, Ernesto Londoño sheds light on the growing humanitarian crisis in Venezuela and its impact on Brazil, which receives hundreds of Venezuelans who are fleeing the economic crisis in their home country. Londoño explores the impact that this exodus will have on the region, highlighting that it will be a test for the region’s tolerance for immigrants as the number of Venezuelans migrants swells and countries’ capacity to provide for them diminishes.