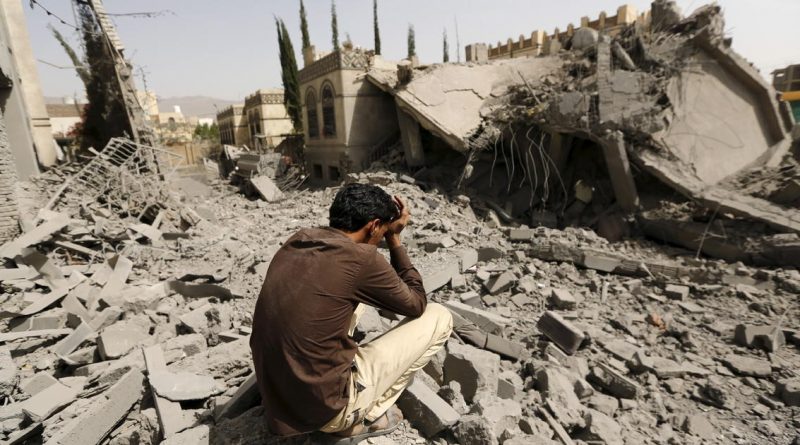 The Case Against the Yemen Intervention

The case for US Support of the Saudi intervention in Yemen rests on two assumptions, that the US is a moderating force in the campaign, preventing further death and destruction, and that the war is a regional proxy struggle against a revisionist Iran. Both assumptions are erroneous, the war is anything but ‘moderated’ and before the intervention, the link between the Houthi rebels and  Iran was tenuous at best. Moreover, I argue that to give Iran the sole title of destabilizing power obscures more than it reveals.

In 2012, the president of Yemen, Ali Abdullah Saleh, resigned, handing over the power to his Deputy Abdrabbuh Mansur Hadi. This was not a smooth transition, and this failure led to the current unrest in Yemen. Moreover, the involvement of Saudi Arabia has created further instability in the country.

While Saudi Arabia accused Iran of providing arms to Houthi rebels and called on the UN Security Council for the imposition of an arms embargo on Iran, it has spent billions in weaponry mostly made by the U.S. and the U.K. to use against Yemen. No one can deny the Saudi government’s atrocities against innocent Yemeni people. According to the UN, out of over 29 million population, approximately one-third are on the verge of famine which has been described as “the biggest famine in the world.”  Some 17 million people (60% of the population) are suffering from severe food and water shortages. The Saudis purposefully installed a blockade aimed at stopping the Houthi rebels, preventing the delivery of humanitarian aid to millions of Yemeni people, based on a UN report.

The Saudi- led coalition is comprised seven countries: Egypt, United Arab Emirate, Bahrain, Jordan, Pakistan, Sudan and Kuwait, is supported by the United States, Britain, and Australia. In March of 2015, the coalition launched a bombing campaign against Houthi militias with the objective of restoring Hadi’s presidency. Overall, tens of thousands of people have been killed, suffered from starvation or cholera, including hundreds of children’s deaths, according to the UN.

While Saudi Arabia accused Iran of controlling Houthis militias in Yemen to justify its war, there is very little evidence to support its claim. Iranian authorities deny supporting the rebels and have even discouraged them from capturing Sanaa, the capital of Yemen. In response to the Saudi’s claim, Bernadette Meehan, a spokeswomen for the National Security Council said that “It remains our assessment that Iran does not exert command and control over the Houthis in Yemen.” Moreover, a U.S. intelligence official said, “It is wrong to think of the Houthis as a proxy force for Iran… Yemen’s chaos is a civil war, not a battleground for regional conflict between Iran and the Sunni-ruled Gulf states,” The Huffington Post has reported. Conversely, Saudi Arabia, with its radical Islam ideology supports Sunni extremists has emerged as “the Middle East’s Biggest Danger.”

In the 72nd session of the Third Committee of the  UN General Assembly, the Saudi delegate expressed his appreciation to Canada for the sponsorship of a draft resolution tabled against five member states, including Iran and Syria, for violation of human rights, underscoring his support of the draft. In response, the Syrian delegate referred to Saudi Wahhabism as “a weapon of mass destruction.” Despite some reforms, such as ending the ban on women driving and allowing them to join the army or anti-corruption measures, Saudi Arabia still remains an autocratic and repressive regime. Yet, Saudi Arabia’s horrific record on human rights abuses, including beheading, is barely covered.  Within the kingdom, there is no gender equality and women do not enjoy the same rights as men do. There is no freedom of the press and numerous human rights activists and bloggers that have run afoul of the regime are in prison.

How could Canada sponsor draft resolutions against some Member States, yet overlook Saudi violation of human rights nationwide and worldwide, their destabilizing role in the Middle East, and their involvement in supporting and funding global terrorism including extremist Wahhabism, the origin of several Jihadist groups?  How can the United States turn a blind eye to the Saudi government’s inhumane and illegal practices? According to Senator Bob Graham, the former Chair of the Senate Intelligence Committee, 28 classified pages of the 2002 Congressional Joint Inquiry suggest, “a strong linkage between [the Sep 11] terrorists and the Kingdom of Saudi Arabia, Saudi charities, and other Saudi stakeholders.” Yet, notwithstanding the crimes committed by Saudi Arabia, the Saudis maintain good relations with the two major powers, the U.S. and the U.K.  Surprisingly, neither has censured the Saudi government, but rather have signed arms deal with Saudi Arabia.  The UK’s BAE Systems has sold 48 typhoon fighters to Saudi Arabia worth € 43 billion, adding to 72 jet fighters.

There was “nothing new” in CBS’ 60 minutes regarding Mohammad Bin Salman, the Saudi Crown Prince, viewed as the de facto leader. Bin Salman’s remarks were too insignificant to resolve any current crisis; rather, his belligerent language and incendiary rhetoric against Iran and Lebanon signify his antagonistic attitude, contributing to “playing an increasingly destabilizing role” in the region. Houthis’ connection with Iran is exaggerated “without providing solid evidence,” giving Saudi Arabia more justification to intervene in Yemen. The U.S, the U.K, France, and other major powers should halt its support of Saudi Arabian campaign in Yemen. By providing arms support to the Saudis, the powerful states, in fact, are contributing to the deaths of thousands of civilians including children in Yemen. What is Saudi Arabia’s motivation? It is not humanitarian aid, but a political machination to exert its influence and dominance in the region.

Maliheh Bitaraf is a graduate student at the Seton Hall School of Diplomacy and International Relations.  Her specializations are International Organizations and Foreign Policy Analysis. Maliheh is an associate editor at the Journal of Diplomacy. Maliheh received her first Master’s degree in Mass Communication from the Middle Tennessee State University.