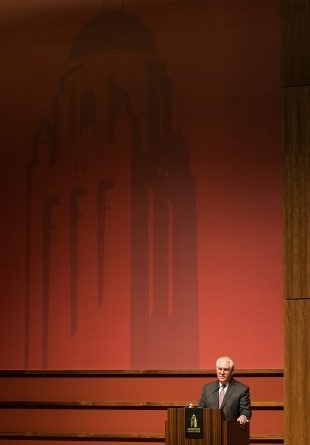 The current Syrian conflict ignited following the Arab Spring in 2011.  As pro-democracy demonstrations swept the Middle East and North Africa, protesters similarly mobilized in Syria against President Bashar Assad’s authoritarian regime.  Within sixty days of the protests beginning, President Assad greeted the protestors with not with reforms but with tanks.  Violence in the country quickly exploded, uncovering sectarian faults in the country’s social and political tapestry as the conflict devolved into a war. The ensuing violence enlisted key players such as ISIS on one side, Russia and Iran on the other,  as well the UN, and a loose umbrella of other assorted rebel groups.  Since 2012, the US has attempted largely to provide optimistic impartial intervention.

On January 17, 2018, Secretary of State Tillerson delivered a speech in California to outline the US’s plan going forward for peace in Syria. He laid out several points.  First, that the US must conduct “stabilization initiatives in liberated areas” to restore civil services and opportunities for normal patterns of life for remaining/returning citizens. Second, that the US is working in support of UN Security Council Resolution 2254 to achieve a political solution to Syria’s conflict.  Afterward, he reiterated the US’s dedication to counterterrorism in Syria, then finished by proposing fair and open elections in Syria, asserting that the only safe Syria is a democratic one.

This plan appears to be a politically safe one: taking care of civilians, and working through a diplomatic peace process with the UN in order to create circumstances for a free and fair election in 18 months, whereby the international community can announce “mission complete.”  It assures American voters that the US is definitely taking concrete steps to reduce the violence overseas and continue to combat the remnants of ISIS, this statement also makes clear the US is a team-player with the international community and supports legitimate UN decisions rather than forging ahead alone.  Many smart people have already responded to concerns that “stabilization efforts” is “nation-building” by another name, so rather than exploring the wisdom of that line of effort, I will instead focus on my own concerns about the political peace process aimed at creating a post-Assad Syrian government.

First, the negotiation process will fail because negations regularly fail when one or both parties are not ready to share nor relinquish power.  In order to have an honest, successful negotiation, both sides must recognize they are at a stalemate and victory as they wish is well and truly out of their grasp.  Last year, President Assad agreed to negotiations but only after recent victories by his forces, indicating a likely disinterest in compromise as he enters negotiations from a position of power.  Currently, those negotiations have stalled, and I argue this is because the Assad Regime has no real incentive to negotiate.  His forces have been largely, militarily successful, and now control roughly half the country.  He can thank military, aid from Russia for this, as Russia continues to lend technology and firepower to the fight, particularly important air power, and appears uninterested in supporting Syrian ceasefires.

Assuming Assad could be persuaded to consider relinquishing power, there is no clear and acceptable plan for what happens to the dictator personally should he leave office.  Firm evidence already demonstrates his regime is responsible for multiple chemical weapons attacks among other atrocities.  In order to coax him out of power, negotiations need to include reasonable assurances that those deeds will, in fact, go unpunished.  Understandably, this pre-emptive pardon is distasteful to the US and allies. At this time, Assad surely expects war crimes charges will greet him the moment he steps down from power, and so he is unlikely to put himself in that position, especially on the heels of his own military’s successes.

Second, there is currently no clear, legitimate, and stable political alternative to the Assad regime. The UN’s own press release following the adoption of Resolution 2254 refers only to the “opposition” when discussing armed forces other than Syrian government or terrorists operating in the country and repeatedly acknowledges how many different entities that terminology encompasses.  In 2012, President Obama officially recognized the Syrian Opposition Coalition as “legitimate representative” with whom the US could work, promising non-lethal military assistance in 2014.  However, rather than a single, united team opposition groups have few goals in common beyond a new regime without Assad and are not remotely organized enough to provide a government strong enough to take control of the civil services (schools, utilities, etc.) and other “stability initiative” the US recognizes are vital to lasting peace and encouraging return home for thousands of refugees. Multiple opposition groups around the negotiating table will also dramatically complicate the peace-making process, something I wager Assad knows and is counting on.

These two points alone demonstrate this peace plan has no clothes, and we have so far avoided opening the can of worms that is analyzing Iran or Russia’s incentives to continue support for the Assad regime. The UN-led peace process as referenced by Secretary Tillerson is doomed because on one side of the table is a fairly successful dictator with few reasons to reduce his power, and the other side of the table hosts multiple, loosely-coordinated opposition forces with different goals and limited resources.  Unless Syrian opposition forces can unite behind a single policy and leader, or Assad’s position deteriorates to a point where he becomes desperate to avoid a final, decisive military defeat, this peace process is doomed.

Eleanor Baldenweck is a graduate student at the School of Diplomacy and International Relations at Seton Hall after ten years of active-duty military service.  She is particularly interested in international security and conflict management, and spends roughly an hour a day reading the news.