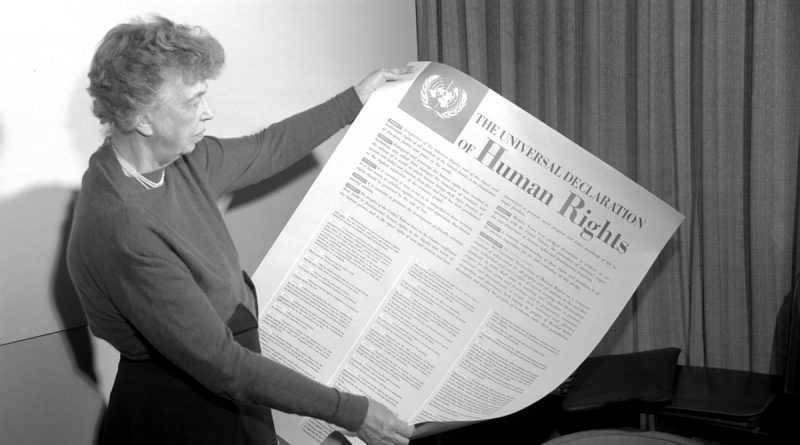 Seventy years ago, on December 10, 1948, the United Nations adopted the Universal Declaration of Human Rights (UDHR). Eleanor Roosevelt, a first lady of the United States of America, led a Commission on Human Rights to draft a bill of the fundamental rights and freedoms proclaimed in the UN Charter. Human rights are the rights of all human beings, which include the right to life and freedom, the right to work, and education. The UDHR became very popular since its creation. According to the Guinness World Record, the UDHR is the second most translated document and has been translated into 370 languages only surpassed by the Bible, which is translated into more than 500 languages. However, it does not necessarily mean that people are guaranteed their human rights. In spite of its popularity, the universality of the UDHR is far from perfect, and certainly, there are issues regarding the enforcement of such rights. Due to a lack of enforcement mechanisms, there are still authoritarian regimes and governments that violate human rights. Hence, the UDHR’s main role is to create a normative basis and common ground of the existence of human rights. If Eleanor Roosevelt knew what the UDHR would become, not a strong treaty which created accountability and precision, would she have written it differently?

The last report from the World Health Organization (WHO) shows hunger is on the rise again, affecting more than 800 million people in 2016. In addition, 11% of the global population does not have enough food to lead a healthy and active life, a violation of UDHR Article 25. The World Food Programme assists 80 million people across 80 countries each year. If people are starving, being displaced, and not healthy enough to work, who is to blame? If human rights are universal, isn’t everyone accountable? Why do governments abuse their citizens, why do they reframe from correcting injustices, why do they prevent International Organizations for upholding these universal human rights?

On top of the human rights violations mentioned above, it is important to note that some of the 150 UN members that signed the Convention on the Prevention and Punishment of the Crime of Genocide are involved in the very mass crimes against humanity they have ostensibly declared to prevent. According to the Global Conflict Tracker, there are many ongoing conflicts that have resulted in large numbers of casualties and human rights abuses: Arab-Israeli Conflict (1920 – ongoing), North Korea (mid 1990s – ongoing), Democratic Republic of the Congo (1997 – ongoing), Afghanistan (2012 – ongoing), Darfur (2003 – ongoing), Yemen (2011 – ongoing), Syria (2011 – ongoing), South Sudan (2013 – ongoing), and Myanmar (2016 – ongoing). The United Nations and its members have not been able to halt or to prevent these mass crimes against humanity. There are old conflicts that still need resolution, and there are new conflicts erupting from all corners of the world.

The international human rights regime also lacks a machinery to enforce it. Governments, through sovereignty, are the primary actors that have the means and the ends to guarantee and safeguard the rights of their societies. They create and control institutions that can promote human rights and have the responsibility to care for their people. Governments are capable of punishing those who violate human rights. As we have seen in many cases, it is not in the governments’ best interests to comply with the UDHR. Besides, the UDHR also lacks the specificity of who carries the responsibility and duties of complying with human rights law. Therefore, governments rely upon and share their responsibilities with nonprofit organizations and civil society to accomplish their duties. One way in which to incentivize governments to conform with the international human right regime is to partner up with International Monetary Fund (IMF) and the World Bank. By providing International financial institutions with reports on human rights abuses, the IMF and the World Bank could withhold assistance to countries that violate human rights. Governments may finally have incentives to comply with human rights.

Non-governmental organizations (NGOs) have been playing a pivotal role in furthering the goals of the UDHR, suggesting where governments can play a more productive role in protecting the rights of individuals through knowledge diffusion. These NGOs are filling the gap that have long been neglected by governments by promoting, ensuring, and protecting human rights. There are many NGOs focusing on human rights, two of whom are extremely competent in gathering data and diffusing human rights abuses: Human Rights Watch and Amnesty International.

Amnesty International was created in the 1960’s, Human Rights Watch in the late 1970’s both focusing on investigating and exposing human rights abuses. These organizations have been very competent in investigating, collecting, and exchanging data on human rights violations around the world. By virtue of their work, NGOs have leverage on human rights issues and they can pressure the governments to act when there are violations of human rights, the so-called “name and shame” principle. Unfortunately, these organizations have limited resources and often face hostile environments in the countries they operate in. regardless, NGOs are a key pillar in the quasi-enforcement mechanism of the international human rights regime.

In the world we live in, human rights are a matter of life and death. NGOs, civil society, and the global community consider the UDHR, despite its limitations as the main pillar of human rights norms that has the potential bring respect and dignity to the world, peace, and security and prevent conflicts from occurring. We must fight the disillusion that comes with its repeated violations by its signatories, and recognize the UDHR as our starting point, for an overarching international system that is the path to a more just and peaceful world.

4 thoughts on “The Universal Declaration of Human Rights at 70”