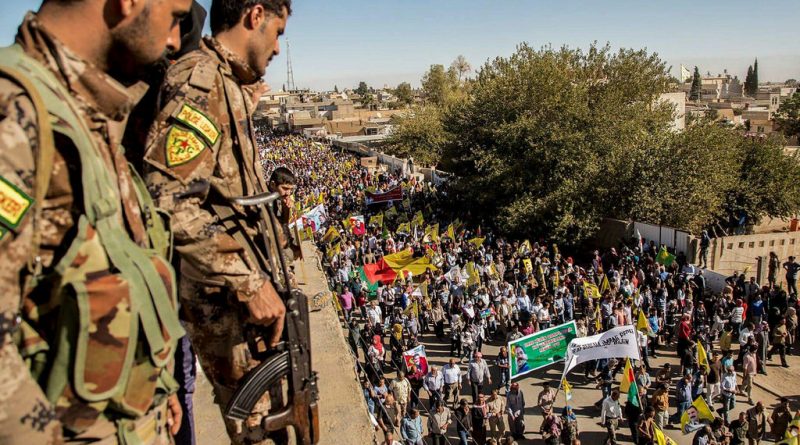 A New Phase in Syria

On February 7th near the Syrian City of Deir al-Zour, US Airpower struck a group of Russian mercenaries, killing several. Thankfully tensions between the two nuclear-armed countries were quickly diffused, with Russia stressing that the operators in question were mercenaries in the employ of the Syrian government, not the Russian state. This and a series of other escalations are indicative of the new phase of the 7-year Syrian civil war that is unfolding in the post ISIS era, where world and regional powers are trying to maximize their battlefield gains as the prospect of political settlement looms on the horizon.

With the Fall of Raqqa, the capital of the self-styled Islamic State, ISIS has mostly ceased to be a territorial entity and will now most likely shift its focus elsewhere in the world and/or transition into a transnational terror group.  The city was liberated by the Syrian Democratic Forces (SDF) an umbrella group of Arabs that works in conjunction with the Kurdish Peoples Protection Units (YPG) and the US military, just one of the alliances that make up the panoply of factions in the war. It was an attack on the SDF near Deir al-Zour that prompted the air strike that could have brought the two global powers to blows. The Russian contractors were supporting Assad government forces, most likely sparring with the SDF in an attempt to snatch up the territory in western Syria open from the collapse of IS.

It is not only Western Syria where conflict flashpoints are heating up. In the north, Turkey has launched the oddly named operation Olive Branch, a military push to carve out a sphere of influence on Turkey’s southern border. The Turkish operation has clashed with Kurdish forces around the town of Afrin, occupied by the YPG and SDF. The Turks argue of the necessity of the operation as an attempt to secure its border from the Kurds, which they claim to have links to the Kurdish Workers Party (PKK) a group which had fought a long insurgency inside Turkey proper. This operation also shows the complex web of shifting allegiances in the conflict as Turkey has tacitly allied itself with the Assad government, its nominal enemy, in an attempt to roll back Kurdish gains.

In the country’s south, another old conflict once again sees new life. Lebanon’s Hezbollah has dedicated a significant amount of men and material to aid the Assad regime and has carved out an important position in the Syrian landscape. This perhaps makes its old enemy, Israel, actions in the area all the more alarming. On February 10th Israel shot down an Iranian drone, a continuation of a sporadic air campaign over Syria. Some commenters worry that as the Syrian war winds down Hezbollah, their Iranian backers, and Israel are due for another reckoning.

In the country’s capital, the full brutality of the conflict is on display. Again, in an attempt to maximize gains, the Assad Regime and its Russian backers are pummeling the neighborhood of Ghouta, one of the last rebel strongholds near the capital of Damascus. In response to the brutality of the bombing on civilians, UNICEF released a blank statement claiming, “No words will do justice to the children killed, their mothers, their fathers and their loved ones.” As this stage of the conflict grows ever more bloody and fraught with escalation, we have provided some analysis by essential analysts on the multiple flashpoints of the war.

Writing in Project Syndicate, Analyst Dominique Moisi argues that there are no winners, Turkey and Kurds, both US allies, clash in northern Syria.

Mara Karlin, writing for Foreign Affairs, argues that as the Syrian conflict draws down a recurrence of war between Israel and Hezbollah grows more likely.

The Washington Post’s David Ignatius, argues that the spat between Washington and Ankara over the Kurds is an impediment to any political settlement to end the Syrian conflict.

The Atlantic Council’s Frederic C. Hof, writing in the Atlantic, despairs the suffering in Ghouta caused by the Assad Regime’s latest offensive. Arguing that the US must strike to coerce the Syrian government to reframe from its mass killing.

Will Wilkinson of the Niskanen Center, writing for Vox, argues that the Trump administration’s immigration debate is about ethnonationalism, not economics.

Tobias Jones, in a Long read for the Guardian, explores CasaPound, a fascist group attempting to bring Mussloni back into Italy’s mainstream

2 thoughts on “Diplomacy Brief: A New Phase in Syria”